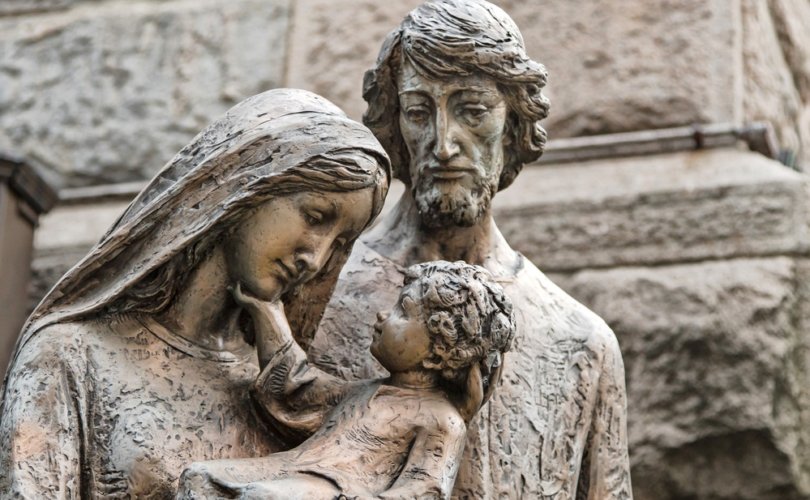 March 19, 2020 (LifeSiteNews) — The month of March is dedicated to the great figure of St. Joseph. In this reflection, I would like to highlight especially the mystery of the relationship between St. Joseph and the Blessed Virgin Mary. I would say that this is the very source of the whole mystery concerning St. Joseph and the way he comes into play in the New Testament and in the Church. If we look attentively at his life, all takes place through Mary. Joseph starts to be known as the husband of Mary (see Matt. 1:16), and because of this spousal relationship — to be investigated in its spiritual depth — he is introduced into the mystery of Christ and becomes his foster father. All through Mary.

Let us take a moment to look at the Gospel of St. Matthew (1:18–19) where Joseph of Nazareth is presented first as the husband of Mary and then as a “just man”: “Now the generation of Christ was in this wise. When as his mother Mary was espoused to Joseph, before they came together, she was found with child, of the Holy Ghost. Whereupon Joseph her husband, being a just man, and not willing publicly to expose her, was minded to put her away privately.” Here we understand that Mary and Joseph were espoused when Mary was found with a baby, although they did not live together yet. In fact, the Jewish espousal had two moments: the celebration of the marriage as a legal union and the cohabitation that normally took place after one year. Also St. Luke (1:27) takes into account that Joseph was espoused to Mary: “The Angel was sent to a virgin espoused to a man whose name was Joseph, of the house of David: and the virgin’s name was Mary.”

By this blessed and unique espousal with Mary also the relationship of St. Joseph with Jesus is shaped. Joseph comes into a personal contact with Jesus through Our Lady, when he is the one who gives the name “Jesus” to the son of Mary (cf. Matt. 1:21). Also at the moment of the adoration of the shepherds, who came with haste to see the sign of God, Joseph is found between Mary and Jesus: “They found Mary and Joseph, and the infant lying in the manger,” says the Gospel (Lk. 2:16), as to point to the Christian path that leads to fully discover who that Baby is — from Mary to Jesus. Through the espousal with Mary, Joseph can embrace Jesus and hold Him in his arms. Joseph is therefore the most perfect icon of Marian consecration. With him the ancient motto starts: to Jesus through Mary.

Let us reflect more on the unique and virginal espousal of St. Joseph with Mary, the very key to understanding the figure of the Carpenter of Nazareth as the first type of Marian consecration.

The espousal of St. Joseph to Mary was extraordinary. When we consider this great mystery, we should be able to transcend the natural meaning of the nuptials and go deeper into its spiritual aspect. This marriage was thoroughly spiritual. In the account of St. Matthew (1:18–19) above quoted, about Joseph being espoused to Mary but not yet cohabiting with her, we can discover something more. It is that while Joseph was already united to Mary — initially and only lawfully — he was not fully united to her, something that we can read in the light of being not consecrated to her yet, since cohabitation was meant to be virginal and chaste for the reason that we will see shortly. The marriage with Mary should be considered under two higher aspects: the initial marital union, and its consummation, to be read rather as consecration to her, a full donation of himself to Mary. Consummation here gets a new and spiritual meaning, foretelling what Jesus would choose in his marriage with the Church on the Cross. As for Jesus crucified, the gift of oneself is “consummated” in his love “to the end” — total love until death. So it is with St. Joseph. His total love to Mary is consummated in his sacrifice: he gave himself up until death for being one with Mary so as to take part in Jesus’s redemption. But this consecration to Mary came to pass after the angel’s revelation, when Joseph had the full knowledge of who Mary was and whose Son was the One in her womb. Joseph is ready to take Mary unto him and through her to look after Jesus.

Now let us see all this in the light of the further account of St. Matthew’s Gospel (1:20–24), where we read: “But while he thought on these things, behold the Angel of the Lord appeared to him in his sleep, saying: Joseph, son of David, fear not to take unto thee Mary thy wife, for that which is conceived in her, is of the Holy Ghost. And she shall bring forth a son: and thou shalt call his name Jesus. For he shall save his people from their sins. Now all this was done that it might be fulfilled which the Lord spoke by the prophet, saying: Behold a virgin shall be with child, and bring forth a son, and they shall call his name Emmanuel, which being interpreted is, God with us. And Joseph rising up from sleep, did as the angel of the Lord had commanded him, and took unto him his wife.”

Here we should focus, above all, on the last sentence of the pericope, which in the original reads: “kai parélaben tèn gunaîka autou” (“took unto him his wife”). The verb para-lambano, to take, has basically two meanings: 1) to take with oneself, to join to oneself or 2) to receive something transmitted. The verb is the same as the one that occurs in St. John’s Gospel (19:27) to describe the taking or receiving of Our Lady into St. John’s life: “And from that hour, the disciple took her to his own” (the original reads: “élaben o mathetès autèn eis ta ídia”). Hence, we can easily conclude that also Joseph, and before anyone else, from that hour, the hour in which he was instructed by the Holy Spirit about Mary and the Baby (echoing the instruction of Our Lord on the Cross to the beloved disciple), took Mary unto him. From that moment of the full and perfect marriage with Mary, he gave himself completely to her so as to come through her into Jesus’s mystery and to participate actively in the work of redemption.

One last point needs to be elucidated in order to have a full picture of St. Joseph’s marriage with Mary as his consecration to her. The fact that the espousal was virginal is of great importance. This can prove that Joseph gave himself completely to Mary in the second period of the marriage, understood rather as a spiritual consummation of that union. The Gospel, while highlighting the reception of Mary by Joseph into his life, says also that Joseph “knew her not until she brought forth her firstborn son” (Matt. 1:25). The word “until” does not mean that after the birth of Jesus, they had normal marital relations. In fact, there are several examples in the Bible where “until” clearly does not imply a change afterward. We can recall among others the words of the Messianic Psalm (109 [110]:1): “The Lord said to my Lord: sit at my right hand until I put your enemies under your feet.” Obviously, Christ won’t reign at the right hand of the Father only until his enemies are defeated. Also when Jesus promised to his apostle to be with them “until the end of the age” (Matt. 28:20), He did not mean to be with them no more after the Parousia. Instead, with the temporal preposition “until,” the Evangelist wishes to say Joseph and Mary, unlike an ordinary Jewish couple, did not consummate their marriage on their wedding night. This is because Mary had taken a vow of virginity, as it clearly appears in her response to the Angel: “I know not man” (Lk. 1:34). All this was not unknown to the Jewish custom; rather, it was a vow of abstinence according to the book of Numbers 30 that Joseph had accepted.

To bring this reflection to a close, let us imagine what it meant practically for St. Joseph to receive Mary unto him so that everyone can have in this great patriarch a model of consecration to Mary. It was for St. Joseph to share all his life, thoughts, wills, goods with Mary in order to please Jesus and to do God’s will; to be virginally devoted to Mary in order to be conformed to the obedience of Jesus to the Father; to love Mary with all his chaste heart so that he could always be vigilant in his ministry as the keeper of Christ and the servant of the redemption; and finally to remain devotedly in the presence of Mary so as to be always in the presence of Jesus. To know who Mary is was for Joseph to know who God is, where He abides.

Consecration to Our Lady, as St. Joseph firstly and most perfectly did, should always aim at getting a Josephine chaste disposition of heart. As we love Our Lady with a pure heart — with the pure heart of St. Joseph — in response, she welcomes us under her mantle of purity, so as to be secure from all snares of impurity and wretchedness in the world. May St. Joseph be more known as the patriarch of love to Jesus through Mary and for his role of mystical spouse of Mary.