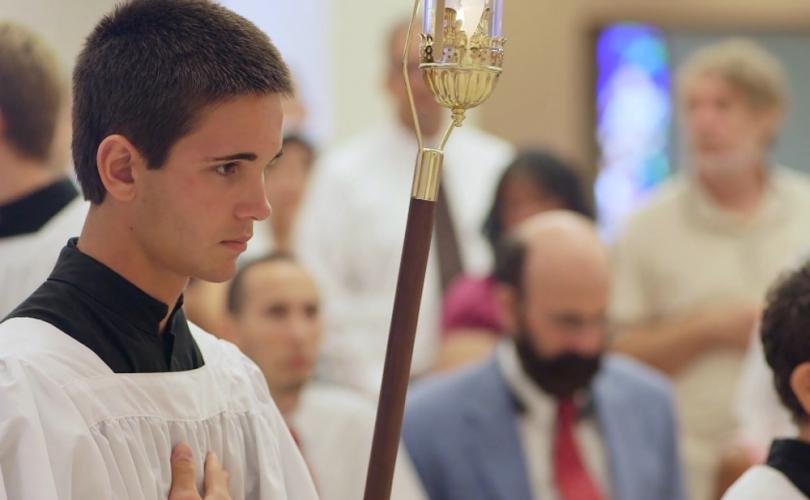 May 15, 2018 (Swimming Upstream) – Two weeks ago, I wrote about the importance of all-boys clubs. My jumping-off point was the decision of the Boy Scouts to drop “Boy” from the name and to open the group to girls. But the push to include girls in all-boy groups isn't confined to secular organizations like the Boy Scouts. It's also been evident in the Catholic Church for decades now. From time immemorial, only males could serve at the altar during a Catholic liturgy. However, in the 1970's (the decade that virtue and taste forgot), parishes began to allow girls to be altar “boys” (renamed “altar servers” to be inclusive). This was unlawful under the discipline of the Church, but most bishops turned a blind eye.

Eventually, the practice was made lawful by Pope St. John Paul II (one of the bigger mistakes of his pontificate). Now almost every Catholic parish in the country (and the world) has girl altar servers. The argument is that they can serve just as well as boys (which is true) and that there's no doctrinal reason to prohibit them from serving (also true). It's also argued that allowing girls to serve makes them more “involved” in the parish and therefore more likely to remain Catholic as they get older. There's no evidence to back this up, and of course for centuries girls weren't allowed to serve at the altar and we didn't see a drop in female membership then.

But the real problems with allowing girls to be altar servers aren't even addressed in these pro-altar girl arguments.

First, having all-male servers allows boys a time to be together without girls. As I noted in my previous article, this fosters a healthier masculinity in boys. It also fosters a healthier spiritual masculinity. Like everything else, how men and women “do” religion is often fundamentally different. Men often see religion in militaristic tones, whereas women see it more in terms of relationships. Neither is wrong, just different. Men will practice their faith in terms of fighting a battle: a battle against temptation, against the world, against the devil and his fallen angels. Women, on the other hand, often practice a more relationship-based spirituality. They practice their faith out of devotion to their beloved, Jesus Christ.

(As an aside, this is why the modern, one-sided emphasis on Christianity as a relationship is damaging. I don't think it's a coincidence that we've seen so many men leave the practice of the faith at a time when we only focus on the relationship aspects of following Christ.)

When my son was eight years old, he had expressed no interest in being an altar server. Our parish was a typical one, and we had both boys and girls serving at the altar. Then we moved to another state, and began attending a Traditional Latin Mass (TLM), which only allowed altar boys. Almost immediately he expressed an interest in serving.

Why the change? Did he have deep-seated anti-woman, chauvinistic feelings? Did he think girls were unworthy to serve and be in his presence? No, he was just a normal, healthy boy who was in the developmental stage where he wanted to hang out with other boys. When he saw boys serving at the altar, being serious and reverent, he was naturally attracted to it.

I also believe the military-like aspects of serving the TLM attracted him. Here were boys standing at attention, following orders, and moving in unison to achieve their goal. Just like a military organization. Although our society now allows women to fight in battle (another terrible surrender to radical feminism), most people still naturally see military service as the purview of men. Likewise for service at the altar. By letting girls serve at the altar, we are feminizing the activity, and thus making it less attractive to the boys.

(For a very sad case of how the inclusion of girls at the altar impacted one young man, read this article: What Being an Altar Boy Once Meant to a Former Gay Man.)

Training for the Priesthood

Another problem with altar girls is that service at the altar is supposed to dispose boys to the priesthood. It's not that every altar boy will be a priest, but priests often come from altar boys. Allowing girls to serve at the altar while not allowing them to be priests is cruel, to be frank. It's like letting a kid practice with a team, but then not allowing him to play in the game. Of course, some think the answer is to allow women priests, but Our Lord already precluded that possibility.

When girls serve at the altar, we make that service no longer about training for the priesthood; it's simply another profane activity, like sweeping the church after Mass. Such an activity is an important service, but it's not sacred, as the priesthood and service at the altar are supposed to be. Some might complain that the Church therefore thinks men are more sacred than women. Yet sacred duties are not about the person performing it, but about God who is being served. A proscription against girls serving at the altar was never a statement about the worthiness of girls, just as the fact that men can't join a Carmelite convent doesn't mean they aren't worthy enough to follow St. Theresa of Avila. Likewise, the Blessed Mother isn't “less sacred” than the Apostles just because she wasn't chosen as one of the Twelve by the Lord (quite the contrary, in fact).

Further, having girls at the altar restricts the ability of the priest to really open up about life as a priest. If he has a mixed-sex gathering of altar servers, how can he talk about the priesthood without being insensitive to those who can never become priests? However, if there are only boys, he can reveal to them more openly what it means to be a priest.

Finally, allowing girls to serve at the altar removes a shield in the battle against today's secular gender nonsense. Many Catholics who understand the problems with radical feminism don't grasp that having no gender distinctions in the Church (other than the priesthood) is a surrender to that radical feminism. If Catholics were to see a clear gender delineation every Sunday at Mass, they would be less likely to succumb to arguments that men and woman are the same. They will understand, subconsciously at least, that they are not.

Several years ago I was conducting an “Ask Any Question” session at my parish. People could ask any question at all about the Catholic Faith. Most who attended were Catholics who only infrequently attended Mass, or had some issues with the Church. I built a relationship with one of the men who attended a few times. He had a number of problems with the Church, but had a good heart. He also respected my adherence to Church teaching. However, one day in passing I mentioned that my daughters would not be altar servers because “I don't believe in altar girls.” (This was when I was at my parish that had both altar boys and altar girls). My friend flipped out. He could not understand my position. He thought it was discrimination, plain and simple, to exclude girls at the altar.

I realized quickly that he would not listen to any of my arguments. His mind was set. I also realized how deeply the view that men and women are the same has taken hold in our culture today. No institution has resisted that view. Even in the Church, which is supposed to be supremely counter-cultural, that view prevailed. If, however, the Church had resisted the push for gender sameness, then perhaps a generation of Catholics would have at least implicitly remembered that men and women are different. But we'll never know.

Published with permission from Swimming Upstream.