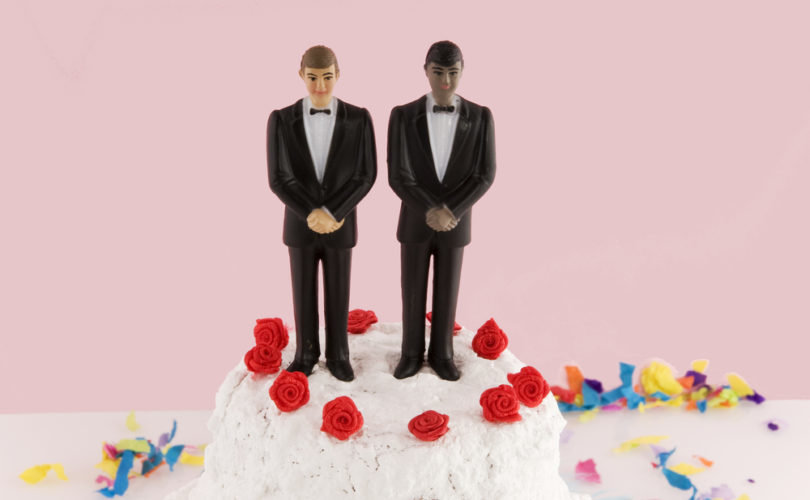 June 4, 2015 (PublicDiscourse.com) — “Marriage equality is a civil rights issue—but it is a public health issue, too. And a growing body of research links bans on same-sex marriage with adverse health effects on lesbian, gay, and bisexual (LGB) individuals.” So begins the amicus brief filed by the American Public Health Association (APHA) in support of same-sex marriage. The APHA says that its brief offers “another compelling reason” for the Supreme Court to overturn state laws that define marriage as the union of a man and a woman.

The brief is one of several that cite scientific backing for a movement that was once about subjective notions of fairness and equality. The motivation is understandable: deep-seated ideological differences seem much easier to overcome when one side can claim the authority of Science (with a capital “S”). After all, who could be against Science?

Not me. As someone who deals with numbers for a living, I want to see public policy informed by data to the greatest extent possible. When empirical evidence helps policymakers better understand an issue, that’s terrific.

But misusing science for political ends is just as bad as ignoring it altogether. Sometimes the misuse comes from portraying weak evidence as conclusive. (“A tiny demonstration project from the 1960s proves that universal preschool would be a great investment.”) Other times, it involves lumping objective findings with a subjective policy prescription. (“To fight global warming, Science demands that we pass the president’s cap-and-trade plan.”)

The APHA’s brief for same-sex marriage offers both weak evidence and an unjustified policy recommendation. It is therefore an excellent illustration of how advocates gild their political positions with the veneer of science. Call it the “science-gilding” of public policy.

The Weakness of the Evidence

Let’s first consider the weakness of the evidence. The APHA’s brief cites only two studies that directly test the claim that marriage laws affect the health of LGB individuals. Here’s how the APHA summarizes the first one:

Those numbers are misleading for several reasons. First, the whole exercise of comparing outcomes in two different groups of states is fraught with imprecision. Because no state-level controls are employed, the study effectively assumes that the only relevant change between 2000 and 2005 is that sixteen states passed amendments defining marriage as the union of husband and wife, while the other thirty-four did not.

And there is considerable ambiguity in the findings. Many health disorders among LGBs seemed to increase in both groups of states, but they seemed to go up more in the states that passed amendments. I say “seemed to” because the sample size of LGBs who had certain disorders is small, leading to estimates with wide confidence intervals. For example, the 42-percent increase in LGB alcohol abuse in states with marriage amendments is statistically significant (meaning greater than zero with 95-percent confidence), but there was also a 29-percent increase, which does not reach significance, in LGB alcohol abuse in states without amendments. The key test is whether the 42-percent increase is significantly greater than the 29-percent increase, but the authors do not appear to have performed that test.

Notice the APHA’s misleading approach to summarizing the study’s results. The responsible way to describe the alcohol-abuse comparison would be to give both the 42 percent and 29 percent point estimates along with significance levels. Failing that, it would be acceptable to omit the point estimates but report the direction (positive or negative) and the significance of each. But the APHA first gives us the exact 42-percent estimate, then rhetorically reduces 29 percent to 0 percent (“states without such bans did not experience any of these spikes”).

Once unpacked, the study’s results are far less convincing than the APHA portrays. This is not to say that the health impact of marriage laws is definitively null. The authors may be on to something regarding particular disorders such as generalized anxiety, but it will take a lot more research to make their case. Certainly no Supreme Court decision should be influenced by a study that is so preliminary.

The second study cited in the brief is no less preliminary, but the APHA summarizes it with unqualified confidence:

The authors of this study refer to it as a “quasi-natural experiment.” Emphasis on quasi. Unlike a real experiment, this study has no control group. It focuses on a single urban clinic dedicated to serving gay and bisexual men, two thirds of whom have a college degree and almost all of whom are under sixty-five. The authors include a one-sentence reference to overall health costs in Massachusetts going up over the same time period, but that is obviously inadequate. A proper control group must resemble the treatment group.

Whether the observed changes are the product of same-sex marriage laws or unrelated factors affecting this clinic and its customers remains unknown. Are the observed effects significantly different from the way patients typically change their visitation rates over time? Are the effects significantly different from the way individual clinics tend to see natural variation in business? The fact that the clinic also saw fewer cases of sexually transmitted infections and other problems not directly related to mental health suggests that there are confounding factors here. It is therefore a sweeping overreach for the APHA to claim that “health outcomes for LGB individuals within the state improved markedly.”

The APHA proceeds to review the strong evidence that married couples are healthier than cohabiting couples and singles. But then it argues that these health benefits are denied to same-sex couples when the government does not recognize their relationships as marriages:

That is a naïve interpretation of the literature. The reason that cohabiting opposite-sex couples are less healthy than married couples is probably that their relationship is not as strong. After all, they have declined to marry. The APHA is assuming here that the health benefits of marriage are caused primarily by the legal issuance of a marriage license rather than the commitment and mutual support provided by a long-term relationship. Remember, even without government-issued marriage licenses, same-sex couples are free to pledge a lifelong commitment, hold a ceremony, wear rings, refer to each other as spouses, and even (in some states) have their relationship legally recognized as a civil union. What additional health benefits come from legal recognition of the union as a marriage? The APHA does not actually know.

In short, the public health case for same-sex marriage relies on weak and speculative evidence. It is not implausible that marriage policy could have an impact on public health, but to cite that theory as fact is to science-gild the debate.

It’s Not Just about Science

The APHA is science-gilding in another way as well. Its argument about public health—even if the evidence backing it were strong—is not “another compelling reason” to support same-sex marriage. In fact, the argument trivializes the philosophical differences that are in play. Political conflict by its very nature produces winners and losers, and sometimes, regrettably, the losing side will be demoralized. That fact alone cannot resolve any disputes.

Fortunately, a lot of social conflict can be avoided when the government takes a hands-off approach, leaving individuals free to live their lives in accordance with their personal identities and values. The definition of marriage, however, inevitably impinges on the deeply-held beliefs of one side or the other. It’s not clear why the mental health of one side should take precedence. One can imagine an alternative study showing that conservative Christians suffer psychiatric disorders when marriage is legally redefined, or when they are publicly shamed and boycotted for refusing to cater a same-sex wedding. Most supporters of same-sex marriage would be unmoved by this “public health” concern, and for good reason. They are not being insensitive—just realistic about the zero-sum nature of the issue.

In the end, the APHA brief is of limited value to the debate. Citing tenuous social science that should not (and probably does not) change anyone’s mind merely obscures what people are actually divided over—namely, the purpose of marriage as a social institution.

Science-gilding has occurred on both sides of the same-sex marriage debate, but it is generally the side favoring redefinition of marriage that gets away with it. One reason is that most of the mainstream media are sympathetic to same-sex marriage. The more important reason, though, is that reporters are easily swayed by statements from respected organizations like the APHA. They usually have neither the time nor the expertise to dig into the research and discover that the emperor has no clothes.

As the debate over same-sex marriage proceeds, let’s drop the pretense of scientific disinterest and focus on the competing values that are really at stake.

Jason Richwine is a public policy analyst in Washington, DC.