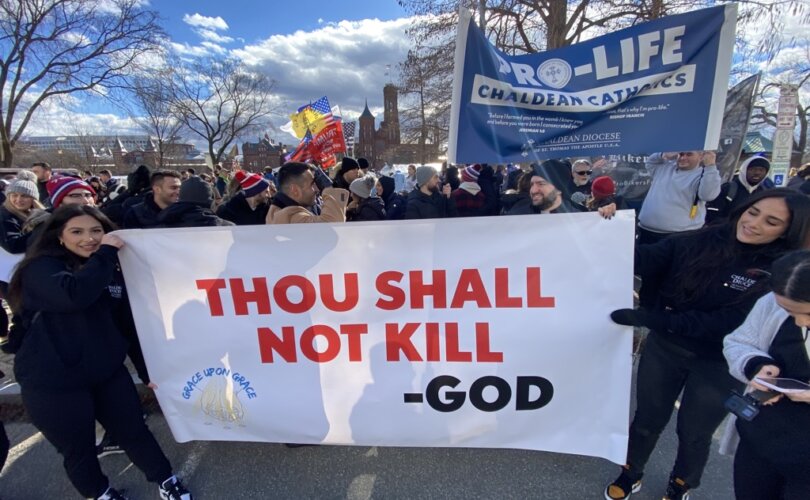 (LifeSiteNews) — For fifty years, the March for Life has annoyed the left and liberal media. On the anniversary of the infamous Roe v. Wade decision, hundreds of thousands have marched to the Supreme Court in Washington, D.C. annually to ask for its overturning. Every year, the media could be counted upon to ignore or underreport the event and find the few counter-protesters to parrot the pro-abortion talking points. The left has done its best to disregard the embarrassment of so many young men and women asking for the end of procured abortion in America.

With the overturning of Roe v. Wade, there was a change. This year, major media suddenly realized that a march was taking place. Newspapers like The New York Times carried stories before the event, looking to create controversy about the March’s future.

Reporters emailed questions like these: What is the March for Life about now that Roe v. Wade has been overturned and the organizers got what they’ve wanted for years? After hearing so many speakers in past years talk about hoping they wouldn’t have to come back to D.C., why are they back in D.C. this year? Why not just have state marches moving forward instead of a D.C. event?

The left now seems only too happy to offer free unsolicited advice about how to stop the D.C. March for Life. It would love to keep pro-lifers in their home states to rid themselves of this yearly rebuke in the U.S. capital.

The battle in Washington is not over

The first and most important reason why the D.C. March is needed is that the battle in Washington is not over with the overturning of Roe v. Wade. Withdrawing from the nation’s capital now would leave the battlefield to the enemy after winning a major victory. All the gains of the battle could be lost.

Such a piece of legislation would have the disastrous effect of overturning all abortion restrictions in the states. All waiting periods, heartbeat bills, time limits and restrictions, and state constitutional amendments would be swept away. All the achievements accomplished over fifty years could be lost if the U.S. Congress passes such a bill to the waiting pen of President Joe Biden.

This is not speculation

The danger of a federal law reimposing the collective sin of procured abortion upon the country is not a remote possibility. On January 23, Vice President Kamala Harris renewed her call for national legislation to impose abortion upon the land. The Biden Administration is doing everything possible to federalize the struggle.

Especially after the overturning of Roe v. Wade, the left is avidly working on engineering federal codification. Indeed, the last Congress almost succeeded in passing The Women’s Health Protection Act in July of 2022. The bill would have enshrined Roe into federal law.

Also, last year, three Republican representatives joined the Democrat-controlled House to pass the Ensuring Women’s Right to Reproductive Freedom Act, which would trump state restrictions on abortion-seekers traveling across state lines. The narrow voting majorities in both houses act as a Damocles’ Sword over the pro-life movement.

All it would take is one more great betrayal—like so many the pro-life movement has suffered—and the codification of procured abortion could quickly become law. Such a bill would have the practical effect of imposing a legislative Roe v. Wade on steroids. Lawmakers need to feel the fire down their necks with hundreds of thousands of pro-life activists at the March for Life to remind them of their duty to stop this national sin. Pro-lifers also need to continue their work in Washington throughout the year.

This is the time for vigilance. As long as the threat of federal codification exists, the pro-life movement must be on the Mall—in ever larger numbers—lest the urgent work being done in the states be gutted and nullified. The federal battle is far from over.

Securing the rights of the unborn

However, it is not enough that Roe v. Wade is overturned or federal codification is successfully avoided. These are much-needed defensive measures, but unborn babies need more protection than this. They need the fullness of pro-life victory. Innocent Americans in their mothers’ wombs will only be safe when the pro-life movement secures federal codification protecting unborn life.

The soul of a baby saved in Missouri is just as precious as one aborted in California. No pro-lifer can rest while some form of abortion exists in the country. Thus, the effort to pass federal legislation safeguarding the lives of the unborn must be pursued. Until this anti-Roe codification is enacted in Congress and signed into law by the sitting president, the March for Life must continue in Washington every January, growing from year to year. Just as the other side will never be satisfied until abortion-on-demand until birth is available in every state, so, too, the pro-life crusade can only claim victory when abortion becomes unthinkable nationwide.

The victory of Roe v. Wade shows this is possible since so many said it could not be done. However, with the help of God, the impossible happened. It can happen again.

Marches are not mutually exclusive

Finally, the suggestion to leave the nation’s capital after Roe is based on a false assumption. Many treat the matter as a zero-sum game. They claim that having one national March will take away from other marches as if they are mutually exclusive.

Such an attitude ignores the fact that many state capitals and major cities already have vibrant marches of their own, happening at times that do not conflict with the March in Washington. Over the decades, the March for Life has been the model for local marches, which have multiplied, growing in numbers and enthusiasm.