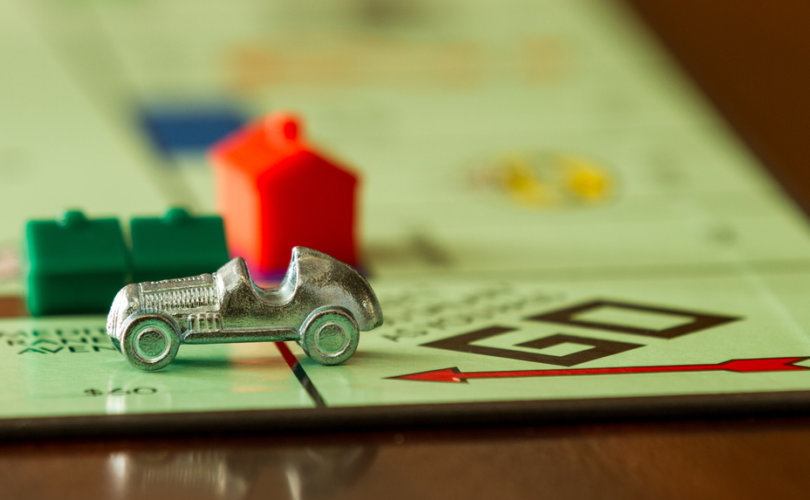 Car from the game 'Monopoly.' Game was made by Parker Brothers now owned by Hasbro.Shutterstock.com

December 19, 2018 (LifeSiteNews) – It is no secret that probably a majority of Catholics in the United States who consider themselves faithful to the Church's magisterium and traditions are at the same time adherents of what is properly called neoliberalism, a position that calls for an economy with as little regulation as possible, a political stance known in the United States as conservatism. However, the main tenets of this understanding of politics and economics not only are not rooted in Catholic thought, they are in stark contradiction to it. They are products of the 18th-century Enlightenment, in fact they are a species of liberalism, as is recognized in most countries of the world, where that term is used to designate the Enlightenment view of society that arose in rebellion against the Christian civilization of the Middle Ages.

This is a viewpoint about both politics and economics, for it is the political question which underlies the economic. In fact, they concern one of the most fundamental questions about government. Does government exist only to restrain and punish evildoers? Hence does it have little or no positive role to play in society? Is it correct to say, as a contemporary adherent of this view, Fr. Robert Sirico, expressed it, “So long as individuals avoid forceful or fraudulent actions in their dealings with one another, government is to stay out of their business”? (Acton Notes, vol. 8, no. 1, January 1998, p. 1)

In contrast to this view, Catholic thought recognizes a positive role for the state, as we can see in the writings of the Roman pontiffs on social matters. Pope Pius XI, in his 1931 encyclical Quadragesimo Anno, discussing the earlier encyclical of Leo XIII, Rerum Novarum, rejects the view that governmental authority is limited only to restraining or punishing evil doers.

With regard to the civil power, Leo XIII boldly passed beyond the restrictions imposed by liberalism, and fearlessly proclaimed the doctrine that the civil power is more than the mere guardian of law and order, and that it must strive with all zeal “to make sure that the laws and institutions, the general character and administration of the commonwealth, should be such as of themselves to realize public well-being and private prosperity.” (no. 25)

And more recently Pope Paul VI, in his Apostolic Letter Octogesima Adveniens of May 1971, wrote,

Political power, which is the natural and necessary link for ensuring the cohesion of the social body, must have as its aim the achievement of the common good. While respecting the legitimate liberties of individuals, families and subsidiary groups, it acts in such a way as to create, effectively and for the well-being of all, the conditions required for attaining man's true and complete good, including his spiritual end. (no. 46)

Of course, the Church has never advocated a statist or totalitarian society. It is one of the unique aspects of Catholic thinking on the social order that it rejects both the notion that the unrestrained selfish strivings of sinful humanity necessarily promote the general welfare, and on the other hand, that the primary responsibility for the ordering of economic life rests with the government itself. Instead, regulation, as much as is feasible, should be undertaken by lower and smaller groups or bodies charged with promotion of the common good. This is the famous principle of subsidiarity, a principle, however, often misunderstood to mean that for-profit entities should be the main actors in an economy.

If one reads Pius XI's two great encyclicals that deal with economic matters, Quadragesimo Anno and Divini Redemptoris, he will see that the pope is calling for a revival of something like the medieval guilds, not of course in the sense of limiting technology to the level of the Middle Ages, but in order to call into being organizations or societies whose aim is to ensure that the economy functions both efficiently and justly. These modern guilds or occupational groups would have as their aims the prosperity of their own industries, the provision to the public of a quality product at a fair price, and the just remuneration of everyone involved in the production process.

But more than this, the Church has specifically taught that a free market is not an adequate method of regulating an economy. One of the clearest statement of this position comes from Pius XI's encyclical Quadragesimo Anno.

Just as the unity of human society cannot be built upon `class' conflict, so the proper ordering of economic affairs cannot be left to the free play of rugged competition [permitti libero virium certamini]. From this source, as from a polluted spring, have proceeded all the errors of the `individualistic' school. This school, forgetful or ignorant of the social and moral aspects of economic activities, regarded these as completely free and immune from any intervention by public authority, for they would have in the market place and in unregulated competition [in mercato seu libero competitorum certamine] a principle of self-direction more suitable for guiding them than any created intellect which might intervene. (no. 88)

An economy which is “completely free and immune from any intervention by public authority” is the same kind which John Paul II designates under the negative meaning of “capitalism” in the encyclical Centesimus Annus.

But if by “capitalism” is meant a system in which freedom in the economic sector is not circumscribed within a strong juridical framework [ubi libertas in provincia oeconomiae, non in solidum contextum politicum tamquam in formam stabilem includitur] which places it at the service of human freedom in its totality and sees it as a particular aspect of that freedom, the core of which is ethical and religious, then the reply [as to whether capitalism is desirable] is certainly negative. (no. 42)

This accumulation of power, a characteristic note of the modern economic order, is a natural result of unrestrained free competition which permits the survival of those only who are the strongest. This often means those who fight most relentlessly, who pay least heed to the dictates of conscience. (no. 107)

We can discern two related but different points made here by the Pontiff. First, “accumulation of [economic] power…is a natural result of unrestrained free competition,” and secondly, the reason for this is that “free competition…permits the survival of those only who are the strongest. This often means those who fight most relentlessly, who pay the least heed to the dictates of conscience.” The observation that free competition leads to economic domination is based upon an understanding of the economy which, although it recognizes that what we call economic “laws” are real, and do reveal inherent tendencies in human nature, they always operate within a legal and cultural framework. Thus, when legally permitted, economic actors will generally strive to increase their market power so they can dominate others and obtain economic outcomes favorable to themselves. They are not simply the passive tools of the forces of supply and demand as posited by the deductive economic models of neoclassical or Austrian economics, but generally, they use power to take advantage of others and to fight for their own economic interests and thus to influence market outcomes according to their desires.

Defenders of the free market like to contrast their own economic model with the real or supposed defects of other systems. Since Adam Smith, the main selling point of the free market has been its alleged superiority over its rivals, rather than its inherent virtues. Some will even admit its weaknesses, but then argue that any other system is worse, and therefore we had best embrace it or we will end up with scarcity and poverty. But such arguments are for the most part special pleading which do not compare a free market with every alternative, but with those alternatives only, such as a Soviet command economy. There are, however, many ways of organizing an economy. We are not condemned to choose between a free market and some kind of centralized command economy in which decision makers order the production of goods and services based on bureaucratic rules or political priorities. There are numerous alternatives to our present system, some better and some worse.

It is simply assumed by proponents of a free market that the only legitimate governmental restrictions are those against force or fraud. But why? Every market requires rules of some kind, and why should not other types of anti-social conduct likewise be prohibited? Why is fraud worse than paying an unjust wage or using sexually seductive advertising to attract customers, or why is physical force worse than using one's market position to undercut a “competitor” and drive him out of business? Why in fact, are others who are in the same type of business regarded as competitors, instead of as brothers engaged in providing the public with a needed good or service, which was the ideal of the medieval guilds where those in the same trade were organized both for their own legitimate good and to guarantee justice in the marketplace for consumers.

The free market is not a desirable economic arrangement. It has been condemned more than once by the magisterium of the Catholic Church, and our experience with approximations to such markets amply demonstrates their instability, their openness to manipulation by the powerful, and the harm they do to the social order. Some kind of regulation of fallen man's economic activity is necessary; the only question is what sort of regulation and by whom it is to be conducted.

The Church, seeing the dangers and harms that often result from central economic planning, desires that such regulation be administered by intermediate bodies. Will these intermediate bodies be run by angels or by men immune from original sin? No, certainly, not, but in the fallen state of our world there is no alternative. We do not abolish ecclesiastical authority or family authority just because bishops or parents are sinful. But since man's economic appetites are likewise tainted by original sin, left to themselves they will not produce justice or promote the common good.

Hence the necessity of regulation.

Catholics should be the first to recognize this, since the Church's social teaching has made this abundantly clear. If we truly have a docile spirit toward all the teachings of the Church's magisterium, then we will not resist the social doctrines taught by the popes, but instead embrace them. If we do not understand them or their rationale, we should study them more carefully, with an open mind, and with prayer. In this way we may hope to bear a Catholic attitude toward all things in our life, an attitude that will in turn contribute to our attainment of that eternal life which is our ultimate goal in this world.

Thomas Storck has taught history at Christendom College in Front Royal, Virginia, and philosophy at Mt. Aloysius College in Cresson, Pennsylvania and Catonsville Community College in Catonsville, Maryland. He holds an undergraduate degree in English literature from Kenyon College in Gambier, Ohio and an M.A. from St. John’s College, Santa Fe, New Mexico, with additional studies in history at Bluffton College and in economics at the USDA Graduate School in Washington, D.C. Mr. Storck was born in Brooklyn, New York and raised in Ohio. He and his wife Inez have four children and five grandchildren. His website is: www.thomasstorck.org.