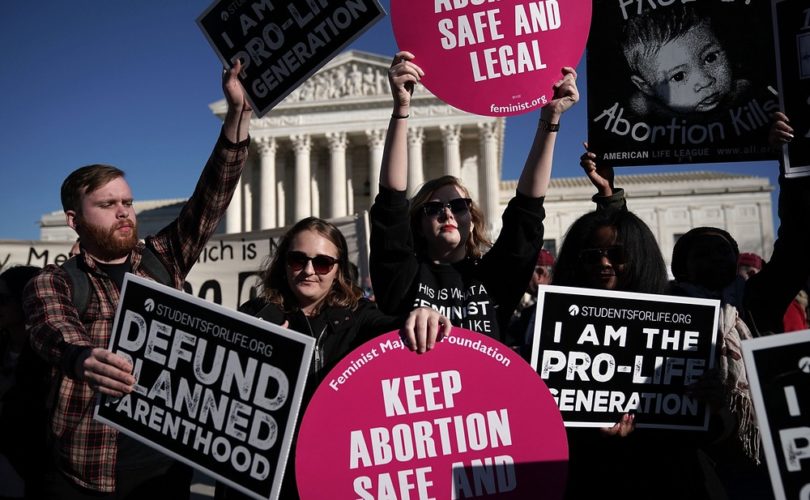 (LifeSiteNews) —The news that the Supreme Court of the United States has reversed Roe v. Wade is not much to celebrate or to worry about. Abortion was legal before the Dobbs decision and remains lawful. The only practical difference is that some states will now restrict abortion by the age of the unborn child, and even fewer states will ban abortion entirely. This is nothing new for Americans. The famous Missouri Compromise resulted in free states where slavery was illegal, and slave states where slavery was legal. The Dobbs decision results in abortion states where all abortion is legal, abortion states where most abortions are legal, and a very small number of life sanctuary states, where all abortion will be illegal. The ultimate question is whether the “Abortion Compromise” by the 2022 U.S. Supreme Court will lead to a second civil war. As Abraham Lincoln wisely observed, a divided nation will not survive.

Most serious constitutional scholars who studied Roe v. Wade knew a long time ago that there was not a legitimate basis to hold there was a constitutional right to an abortion. It was bad law that advanced a political agenda and gave a legal license to mothers to pay medical clinicians to kill defenseless innocent unborn human beings with legal immunity, resulting in the deaths of millions of dead babies who were not defined as human beings or persons with legal rights.

After Dobbs, the leftist media is exploiting a genuine psychological crisis to amplify the outrage of some women who depict themselves as second class citizens for losing their national license to kill. This is contrary to American values, for equality was never intended to grant either women or men an unlimited right to legally arbitrarily kill any class of innocent defenseless human beings without any legal consequences.

From the time of conception, the scientific and biological truth is that a new human being has come into existence. An unborn child is both a human being and a person, separate and distinct from its mother. Biological and scientific validation is irrelevant to some judges. The legal “truth” departs from reality, as legal fiction often prevails. Definition laws are passed that pretend an unborn child is not a human being or a person, in order to grant a legal license to kill that child. As a result, the mother and her co-conspirators, and the actual killers of her unborn child, are immune from a charge of murder.

Adults find ways to complicate and hide that simple truth that even a young child easily sees: “Mommy, I am going to have a baby brother or sister?” After all, it was a child who was brave enough to tell the truth that the naked Emperor was not wearing any clothes.

The Supreme Court in Dobbs behaved like Pontius Pilate at the trial of Jesus, delegating to others the authority that is rightfully the Court’s. Yes, the matter of abortion regulation belongs to criminal law, which is in the exclusive jurisdiction of the states. But states cannot enact unconstitutional laws violating the Bill of Rights. What the 14th Amendment does grant to every human being in the United States is the national right of equal protection of the laws prohibiting murder. The human victim’s age or condition of existence is irrelevant to the constitutional right to protection from murder.

Put another way, the Court left unresolved the ultimate question of whether some human beings are more equal than others, just like the disturbing message from George Orwell in Animal Farm.

Ultimately, the Christian idea of equality and the rule of law is at stake. With the demise of Christianity, and the rise of secular humanism, Marxist ideology, and woke cancel culture, the Christian roots of America are under daily attack. As Dr. Reverend Martin Luther King Jr. observed, “… an unjust law is no law at all.” It is immediately obvious that any legal license to abort an unborn child violates the most basic law of equality mandated by the Bible, known as the “golden rule” to “do under others as you would have done to you.” There can never be the rule of law unless there is a moral component to that law. The granting of an arbitrary license to kill an entire class of innocent human beings does not conform to the rule of law. The answer is clear: all abortion is incompatible with the rule of law.

Some who say they are horrified or outraged by the Dobbs decision are political opportunists who seek re- election or public office, posing as a champion of women’s rights. They should at least have the integrity to tell the truth. Abortion remains legal, and the Supreme Court lacked the courage to leave open the door to another case that will serve as the legal foundation to make abortion illegal once and for all. The protests are all about the retention of political power by those who want a legal license to kill innocent human beings and seek to destroy any opponent who stands for truth, justice, equality, morality, the rule of law and the supremacy of God.