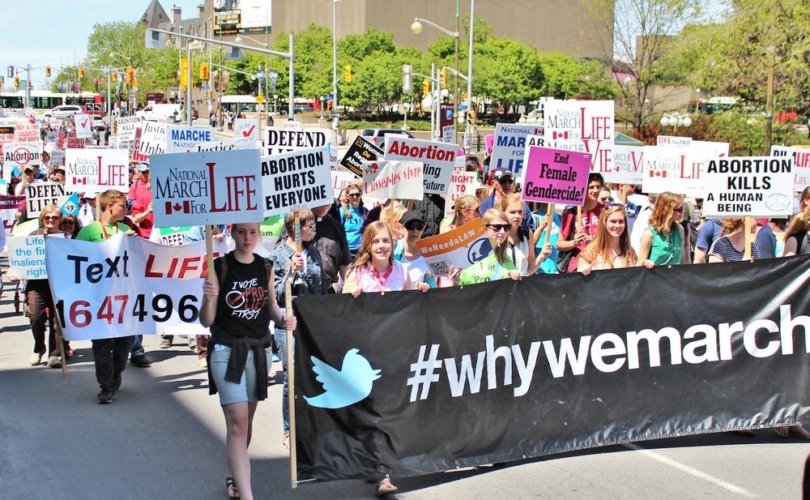 (LifeSiteNews) — May 14, 1969 will always be a day of infamy, a day of shame, a day of utter disgrace in our beloved country Canada. On that day, fifty-three years ago, Parliament passed a bill that permitted the barbaric slaughter of pre-born babies.

Killing babies in their mothers’ wombs was previously a criminal offence. And rightly so. Pre-born babies, just like everyone else, are human and deserving of human rights and legal protection. Pre-born babies, no matter how small, are persons.

But then-Prime Minister Pierre Trudeau disregarded the humanity of pre-born children, giving their mothers the morally abhorrent and despicable “choice” of deciding the fate of the precious lives growing inside them.

Abortion became the greatest human rights violation of our country. Abortion has killed over 4,000,000 pre-born babies in Canada since the day of infamy, about 100,000 annually.

Twenty-four years ago, pro-life Canadians, like you and I, began to march on the streets of our nation’s capital. We refused to ignore the grave injustice being inflicted on the smallest members of the human family. We decided to do something in the public square to end the killing. We decided to take a stand and be a voice for those who were unable to take a stand and have a voice.

“But the purpose of gathering in Ottawa this May 14 isn’t just to raise awareness of the historical importance of the occasion: even more important, the purpose is also to help rebuild a culture of life in Canada right now. Commemorating May 14 should renew the fervour of ordinary pro-lifers, re-awaken the consciences of our fellow Canadians, and, most of all, inspire our political leaders to see the truth, and to act on the defining issue of our time.”

Hughes emphasized the importance of pro-lifers from across the country participating in the event.

“For years, many Canadian pro-lifers have called for a demonstration of this sort in Ottawa on May 14,” wrote Hughes. “Finally, it’s gotten off the ground, and momentum is building among key individuals and groups participating; but if it’s going to be as good as it promises to be, we’ll need to have a strong show of support from the grassroots.”

Today, I echo Jim’s urgent call for participation in this event, which continues to be held on the second Thursday of May each year. This year marks our 25th National March for Life in our nation’s capital.

Today, we must pick up the torch from previous marchers and carry the flame forward in the battle to end abortion. We will not stop fighting until every baby in his or her mother’s womb is legally protected and granted the same rights that every person is granted, first and foremost the right to life.

This year’s National March for Life is on Thursday, May 12. The event will take place in person in Ottawa as well as online. Details can be found at Marchforlife.ca.

The theme of this year’s March is “I AM.” We call upon the Holy Name of God in our march to defend the sanctity of every human life from conception until natural death. This theme lets every single person know that he or she is created in the image of God. “I AM fearfully and wonderfully made,” the Scriptures remind us (Psalm 139:14). This applies as much to pre-born children targeted by abortion as it does to the sick and elderly targeted by euthanasia and assisted suicide. Both are crimes against life.**

We have a full week of events leading up to the Rally on the Hill and the March itself. See below for details. And we’re excited to announce our keynote speakers at various events. We’ll have our fabulous Rose Dinner following the march where we’ll be entertained by The Babylon Bee’s CEO Seth Dillon, a dedicated pro-life advocate who knows a thing or two about how to tackle woke leftism, political correctness, and cancel culture with the hard-hitting tool of satire. Buy your Rose Dinner ticket here. Hurry, spaces are going fast.

It’s important to have an in-person event this year in the nation’s capital, especially as the forces of cancel culture push to silence the truth in the public square. Rallying on Parliament Hill and marching through the streets of Ottawa lets lawmakers and citizens alike know that pre-born children deserve the right to live and to be legally protected in the womb.

We’re looking forward to joining with thousands of you from across the nation to peacefully and joyfully take a stand for the pre-born. God willing, we’ll see you there!