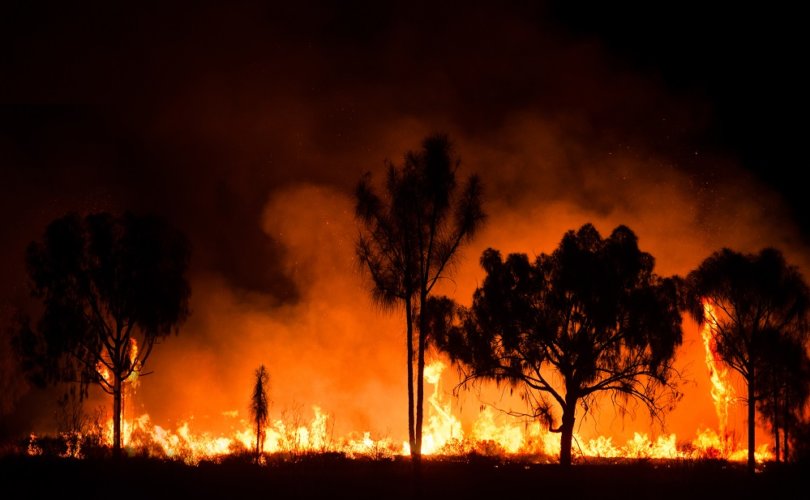 January 29, 2020 (American Thinker) — With at least 27 people killed and 18 million acres incinerated as of last week, the worst bushfire season Australia has seen in decades is a bad one, no doubt about it. Reproduced with permission from the Western Australian Land Information Authority, the FireWatch map below shows the location of individual fires as of Jan. 14, 2020. Disclaimer: The size of the icons on the map relates to the location of the fire and not to the size of the fire on the ground. Any opinions expressed herein are mine and were not arrived at in consultation with the Western Australian Land Information Authority.

The season's fires have been intense and widespread, but not nearly as much as reported by some media that made it seem as though virtually the entire continent was ablaze. Eighteen million acres destroyed is a disaster by any measure, but that acreage represents less than 1 percent of Australia's landmass and less than 6% of its forests.

No one denies that the fires were made worse by dry conditions resulting from a drought and record hot temperatures. But, as measured by the amount of forestland destroyed, the 18 million acres for this year's fires pale in comparison to the 290 million acres burned to the ground during the 1974 bushfire season. That's equivalent to the size of France, Portugal, and Spain combined, and the 1974 fires occurred years before anthropogenic global warming theory suddenly appeared out of nowhere in the 1980s. And, as measured by the respective death tolls, the recent fires pale in comparison to the under-hyped 2009 “Black Saturday” bushfires in Victoria, which killed 173 people.

Why so much more hysteria this time around? According to Australian-American journalist Miranda Devine, the Black Saturday bushfire outbreak “wasn't blown up into a global cause-celebre promoted by the likes of Barack Obama, Greta Thunberg and Cate Blanchett, because this time there's a climate angle to be exploited.”

If global warming alarmists are wrong in blaming this season's bushfires on Earth's ever-changing climate, then what was the cause? The answer, or at least a big part of it, is not hard to see. It's now summer in Australia, and intense bushfires have occurred on the continent with regularity for thousands of years. Numerous government fire commissions have all reached the same conclusion: that hazard reduction is the only way to prevent bushfires from spiraling out of control. According to Australian forester and former acting fire control officer Ian McArthur, climate change did not cause the current crisis:

Long unburnt fuels [dead trees, tall grass, undergrowth, etc.] in national parks are the primary cause. Basic fire management states that a fire needs oxygen, a heat source and fuel. The only one of those that can be manipulated is fuel. The more fuel, the more intense the fire, the harder it becomes to suppress the fire.

In other words, planned fire prevention burns eliminate the natural ground fuel upon which rapidly spreading wildfires depend. In commenting on the cause of the fires, Ms. Devine wrote that “blaming climate change is a cynical diversion from the criminal negligence of [Australian jurisdictions] which tried to buy green votes by locking up vast tracts of land as national parks, yet failed to spend the money to control ground fuel and maintain fire trails.” (Fire trails are roads built in forests to provide emergency access to firefighting equipment and personnel.)

As reported by Ms. Devine, Dr. Phil Cheney, Australia's foremost bushfire researcher, has spent 30 years trying to convince authorities that systematically reducing ground fuel annually would reduce fire intensity to a manageable level. Burning ground fuel in the cooler months was standard fire prevention practice until progressive bureaucrats in Australia's state and federal governments began vigorously opposing controlled burns in the name of “biodiversity.” According to Frank McKee, senior fire control officer in Boyne Valley, it's next to impossible to get all government departments to agree to hazard reduction burns on state-owned land. “You have to jump through hoops so high it's ridiculous,” McKee said.

Under pressure from greenies, the government of New South Wales decreed that preventive burning is a “threatening process” that undercuts the nation's Environmental Protection and Biodiversity Conservation Act. Passed in the name of Deep Ecology, that official act made it virtually impossible to prevent wildfires from spiraling to cataclysmic proportions, as happened with this season's bushfires.

Unless natural ground fuel sources are controlled, there's not much that can stop a wildfire from consuming vast tracts of wooded land during hot, dry, and windy conditions. (That's a major reason why the recent wildfires in California were so devastating: in support of “biodiversity,” a succession of Democrat governors created an inferno-in-waiting by refusing to clear the state's forests of an estimated 130 million dead trees.)

The deleted post showed a green activist displaying a protest sign that read, “Spring Burns Kill Baby Birds Alive.” That's 100% true, but how many more birds and other wildlife are killed due to obstruction of controlled fire prevention burns? Such obstruction can result in massive fires that destroy millions of acres of wildlife habitat, as happened in the forests of East Gippsland.

Here's a combustible question worth contemplating: other than green activists obstructing controlled fire prevention burns, could there be another human cause of the Australian wildfires? Yes. Wildfires can also be caused by…arson. According to CNN, police in New South Wales have charged 24 people with deliberately starting bushfires since November, and those are just the ones who got caught.

Imagine for a moment a small group of Aussie eco-zealots — it wouldn't take many — being recruited to “prove” man-made global warming theory once and for all by surreptitiously setting an entire continent ablaze. Imagine them being instructed to do so during hot, dry, and windy conditions to ensure that their handiwork would spread like, pardon the pun, wildfire. Given the astounding fraud and deception that underpins man-made global warming theory — Climategate 2009 is a prime example — political arson cannot be ruled out as the cause of most of this season's Australian bushfires.

Why would anyone even consider setting an entire continent ablaze? Because progressive environmentalism, AKA “climate change,” is an “ends justify the means” movement that depends upon catastrophic weather events to effect its grand stealth agenda, which I wrote about in “The Cynical Plot behind Global Warming Hysteria.”

An electrical engineering graduate of Georgia Tech and now retired, John Eidson is a freelance writer in Atlanta. [email protected]