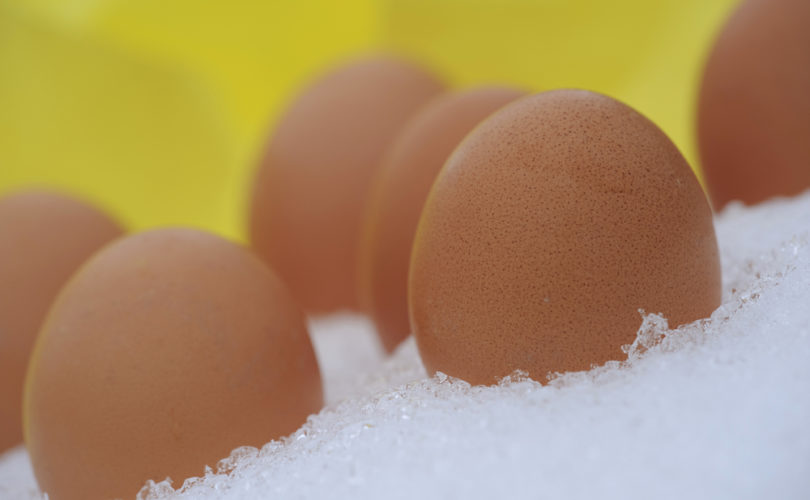 NBC News announced that the tech companies, Apple and Facebook, are now covering the cost of egg freezing for their female employees. The story reads like a press release for the assisted reproductive technology (ART) industry, avoiding any mention of high failure rates or potential health risks to infants born from an egg frozen in liquid nitrogen.

Unlike previous services offered to actual patients experiencing fertility challenges, egg freezing is now being marketed to perfectly healthy young women as the next best thing since the invention of the Pill.

It is true that over the last three decades experimental egg freezing trials and techniques have resulted in the births of an estimated 1000 to 2000 babies worldwide. The majority has been born to cancer patients younger than age 30 hoping to preserve the quality of their eggs prior to undergoing chemotherapy.

But what most employers don’t know is that even the “new and improved” flash freezing method–-known as vitrification–-has a 77 percent failure rate among women age 30, and in women age 40 the failure rate is 91 percent. With this kind of poor track record, employers should think twice before investing in procedures that, down the line, may very well harm the physical and mental health of their female employees––and their company’s productivity.

In 2011, Samantha Pfeifer, then co-chair of the Practice Committee of the lobby and trade group, the American Society for Reproductive Medicine (ASRM), said in a Nature online interview that there were still many unanswered questions about egg freezing. “How successful will this be for someone in her late thirties? That has not been evaluated in any randomized controlled trials,” she said.

Most alarming is that some of the chemicals used in the freezing process are toxic to embryos, and no one knows how much the eggs absorb.

The Society for Assisted Reproductive Technology (SART) estimates that for a woman age 38, the chance of one frozen egg leading to a live birth is only 2-12 percent.  This is an important and significant finding given that the average age of elective egg freezing customers in the US is 37.4. Worldwide in 2011, fewer than ten babies were believed to have been born from eggs frozen for women aged 38 and older.

Oddly enough, in October 2012, after reviewing 981 articles, of which 112 were relevant to safety and efficacy, Pfeifer’s ASRM Practice Committee announced that egg freezing should no longer be considered “experimental”.

Citing “a lack of data on safety, efficacy, cost effectiveness, and potential emotional risks,” the committee cautioned that:

“Marketing this technology for the purpose of deferring childbearing may give women false hope… Patients who wish to pursue this technology should be carefully counseled.”

In a press statement, Pfeifer was quoted as saying:

“While a careful review of the literature indicates egg freezing is a valid technique for young women for whom it is medically indicated, we cannot at this time endorse its widespread elective use to delay childbearing. This technology may not be appropriate for the older woman who desires to postpone reproduction.”

One wonders why the committee thought it appropriate to lift the experimental label at all, but they were right in stressing that egg freezing businesses should “carefully counsel” women who pursue egg freezing as a way to defer motherhood.

It is doubtful that neither the SART or ASRM anticipated that some members might go about “informing” women of their options through “Let’s Chill” egg freezing cocktail parties, like the ones hosted by EggBanxx, and sponsored by the drug company EMD Serono, Freedom Fertility Pharmacy, and three New York City-based infertility clinics.

Their September 2014 event at a swank Manhattan hotel highlighted the “Three F’s: Fun, Fertility and Freeze”. To unsuspecting potential customers and their employers, the venue itself implies that egg freezing is so popular, easy, safe and effective that you can party down and have a few martinis before signing on the dotted line.

With a perpetual media and marketing blitz loaded with slogans like “extend your fertility,” “tackle conception later” and “take control of the calendar,” healthy young women who can afford it might assume they are being negligent if they don’t agree to “insure” their chances to become a mother in the future.

This fear is exactly what anthropologist Tiffany Romain has written about in the book, The Anthropology of Ignorance. Like IVF, she says, the egg freezing business­­ markets hope, and that hope often turns into a fantasy of “empowerment”.

This kind of dreaming and imagining is lucrative for the ART industry. In keeping with its tradition of assigning high price tags to its procedures, egg freezing fees per cycle can range anywhere from $7,500, all the way up to $10,000 ––and upwards of $16,000 for the recommended three cycles it may take to find that “one good egg”.

In the future, rather than encouraging female workers to submit to invasive and often traumatic reproductive services, employers might actually consider rearranging workplace policies that enable women to reproduce in their safest biological window ­­–– while retaining their job security.

Reprinted with permission from MercatorNet