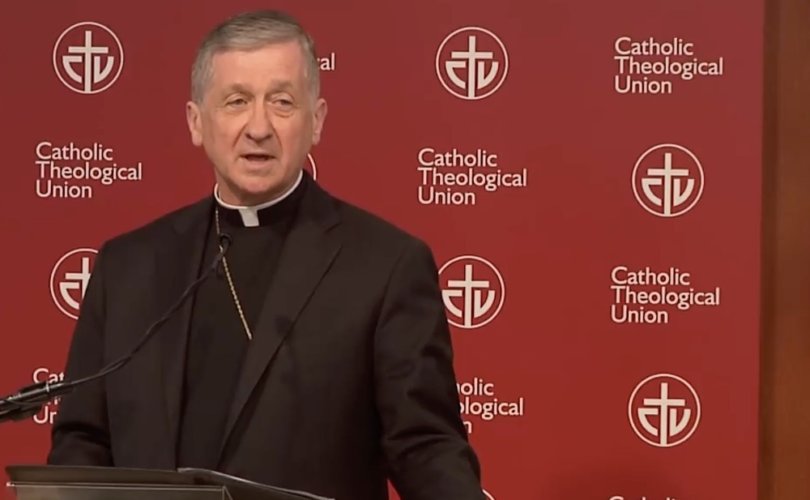 June 25, 2018 (Newsmax) – The Catholic bishops met in Fort Lauderdale a few days ago. The dominating topic of discussion was politics, specifically, their official guide to Catholic voters, Forming Consciences for Faithful Citizenship.

The Pope Francis faction, led by Cardinal Blase J. Cupich of Chicago, called for a complete rewriting of the document since it no longer represented “the new body of teaching” as taught by the present pontiff, specifically mentioning climate change, poverty, and immigration.

These two are not the only ones who believe that in the space of five years, since Bergoglio’s 2013 election, the moral and social teaching of the Church has been so fundamentally altered Faithful Citizenship no longer speaks with the true voice of the Church. So much for an institution considered slow to change.

Other leading bishops, however, including Archbishop Gomez of Los Angeles, opposed writing a new document, arguing what was needed was a more straightforward, significantly redacted version of Faithful Citizenship along with an accompanying video for YouTube, etc.

When the votes were tallied, 77 percent of the bishops voted for the creation of shorter materials — a letter, video, and other “resources” to supplement Faithful Citizenship.

During this discussion there was no mention of Trump being the most pro-life president in our nation’s history. It should not surprise us at that omission since the intent behind the beefing up of Faithful Citizenship is to deny Trump a second term in office.

The bishop’s present silence about the president's achievement is only another iteration of their attempt during the campaign itself to camouflage Hillary Clinton’s pro-abortion stance by arranging with moral indictments Trump about “The Wall.”

The strategy didn't work. Faithful Catholics would not be bullied into seeing moral equivalence between killing the unborn and insisting on secure national borders.

Trump/Pence won 52 percent of all Catholic votes and 56 percent of mass-attending Catholics. In the election aftermath, the weeping and wailing at the USCCB must have matched that of Hollywood, the EU, and the mass media.

As it stands, the 2015 version of Faithful Citizenship is a flawed document. A close reading of it offers the Catholic voters several loopholes allowing them to ignore a candidate’s abortion stand if other “morally grave reasons” prevail. It remains to be seen, whether the new supplements will magnify these flaws or keep them buried in theological mumbo-jumbo where they belong.

We can fully expect, however, the redacted version of Faithful Citizenship to put the immigration issue front and center. This placement will create the impression of a de facto moral equivalence with settled life issues such as abortion. The bishops approved language that virtually guaranteed these new shorter materials will “apply the teachings of Pope Francis to our day.”

But just as in 2016 when the bishops pressed the immigration issue, it won't work in 2020. For one thing, Pope Francis has spent all the capital of good will created by his election and his successful U.S. visit. Pope Francis, as it were, has no ‘coattails.’

If the bishops produce election materials that recast Faithful Citizenship to fit the Pope’s vision, it will only create greater distance between the bishops and their faithful. They will be relegating themselves to becoming just another cadre of grumpy Never-Trumpers.

At the very least, the bishops could have expressed common ground with the Trump administration on his efforts to defuse the nuclear threat posed by North Korea. After all, doesn’t this come under the rubric of “world peace”?

The bishops, instead, focused on the president's decision to exit the Paris Climate Agreement. The USCCB itself has been asked to sign the Paris declaration by its own Catholic Climate Covenant created in 2006. How much money will it cost Catholics if the bishops decide to play in European politics on that issue?

Meeting in Fort Lauderdale, the bishops ignored the opportunity of voicing solidarity with the president’s pro-life agenda and his the quest for peace between North and South Korea. Instead they prepared to sharpen their knives for the 2020 election. Is this what we now call “evangelization”?

Published with permission from Newsmax.