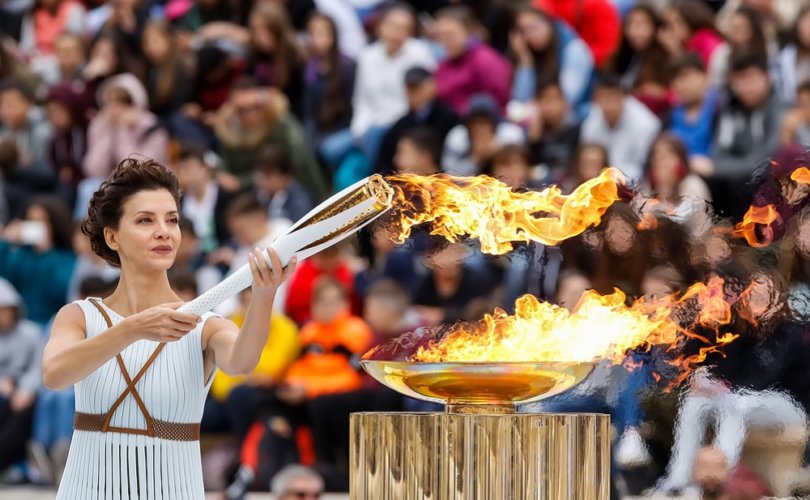 December 2, 2019 (American Thinker) — Next year's Tokyo Summer Olympics may spell the swift death of the transgender movement as a dominant politically correct touchstone. Men, self-identifying as women, are poised to make a clean sweep of the Women's Olympics, triggering a very public debate on this third-rail subject. That firestorm, pitting pro-women feminists against extreme pro-transgender progressives, will begin July 24, just as the presidential sweepstakes moves into its sprint to the finish line.

The International Olympic Committee — the IOC — recently admitted that it couldn't come up with fair guidelines governing how and when “transgender women” (that is, men) can compete as women, against actual women. Currently, the IOC says a man self-identifying as a woman can compete, so long as his testosterone level remains below 10 nanomoles per liter (nm/L) for 12 months. Typically, men have between 7.7 and 29.4 nm/L of testosterone, while women have between 0.12 and 1.77 nm/L. Under those IOC guidelines, hormonally restricted men can still maintain nearly a 500-percent testosterone advantage over women.

However, the real benefit men calling themselves women experience, according to recent studies by Sweden's Karolinska Institutet, a leading medical university, is found in their masculine bone structure and upper body strength. This develops throughout puberty, making current testosterone levels largely insignificant. These masculine genetic benefits are the very reason for women's athletics.

“Not every male advantage dissipates when testosterone drops,” according to Alison Heather, a physiologist at the University of Otago in New Zealand. “Some advantages, such as their bigger bone structure, greater lung capacity, and larger heart size remain. Testosterone also promotes muscle memory. Transgender women [i.e., men] have a heightened ability to build strength even after they transition,” Heather explained.

Olympic gold medalist Paula Radcliffe called it “naïve” not to think men calling themselves women “will become a threat to female sport,” asserting that “people will manipulate the system.” She tweeted, “If you are born and grow up male you cannot be allowed to compete in female sports simply because you 'identify' as female. It makes a mockery of the definitions of male and female sports categories.”

High-profile tennis phenom and outspoken lesbian advocate Martina Navratilova concurred, raising concerns over the equity of men who call themselves women competing against women. “A man can decide to be female … win everything in sight, earn a small fortune, then reverse his decision. Letting men compete as women — simply because they change their name and take hormones — is unfair.”

British Olympics silver medalist Sharron Davies agreed. “There is a fundamental difference between the binary sex you are born with and the gender you may identify as. To protect women's sport, those with a male sex advantage should not be able to compete in women's sport.”

This potentially devastating trend has shown up in recent pre-Olympic international sporting competitions, where men identifying as women took the gold. These recent routs generated a howl from a few outraged feminist groups, though the mainstream media — siding with transgender interests over traditional feminist interests — have largely shut them out. Without a media voice, this controversy has had all the dynamics of a tempest in a teapot. One feminist activist, Women's Liberation Front board member Kara Dansky, told Fox's Tucker Carlson that CNN, MSNBC, the New York Times, and the Washington Post, had all shut her group out. Only Fox had the courage to give them a voice.

However, that suppression can't last. This internecine brouhaha will really hit the fan next July, when men competing as women start racking up Olympic gold — at the expense of women who physically can't compete with larger, stronger men. When the 2020 Summer Olympics arrive, media suppression of feminist concerns will change.

In fact, the change has already begun.

One controversial case involves a man now calling himself Laurel Hubbard. Before conversion, he'd competed as a man in Olympic-caliber weightlifting events, well into his 30s, before he transitioned at age 35. Recently, he took two golds and a silver at the games in Samoa, dominating three women's heavyweight lifting categories. In response, New Zealand–based Speak Up For Women is demanding that males be barred from competing as women, regardless of their claims of transgender womanhood. While a similar feminist sports advocacy group in Great Britain also spoke out against Hubbard, the IOC proved unable or unwilling to address the issue.

These self-identified “women” are all on the fast track to Olympic gold. Helen Carroll, who worked on the NCAA Transgender Handbook, estimates that although only three tenths of one percent (0.3%) of Americans identify as transgender, there are 200 men calling themselves transgender in NCAA sports today. That disproportionate representation ensures that there's a lot of Olympic gold out there that young women won't have a prayer of winning. This reflects the state of men who call themselves women in sports here and worldwide. The mainstream media have kept a very P.C. lid on the outrage expressed by some feminist groups, but the 2020 Olympics will change that.

This quadrennial competition will take place live in millions of homes next summer. The Olympics are typically watched by more than a billion people worldwide — including more than 25 million Americans at any one time. Many of these viewers will, for the first time, be confronted by biological men “identifying as women,” competing as transgender women, taking advantage of their huge natural advantage, allowing these biological men to dominate women athletes.

Since the core purpose of the feminist movement has always been to help prevent women from being dominated by men, this transgender inclusion in competition will inevitably create a huge rift within progressive circles. Lines will be drawn between those feminists — and other progressives — who hold fealty to all politically-correct causes, seeing them as more important than their own cause. They will be pitted against other feminists who feel that biological women athletes should not have to compete with men. These feminists will be joined by millions of fair-minded Americans, who will watch, horrified, while men capture the medals and marginalize female athletes.

This internal debate may come down to numbers. Traditional feminists will demand, “Do you support us who make up 51 percent of the population — or do you support the dominant rights of a minority that includes fewer than a third of one percent of the human population?” When that split comes, it could deconstruct the entire progressive coalition. Currently, that umbrella of competing needs appears to be held together by duct tape and baling wire.

Worse for them, this disastrous inner debate will occur in public, during the titanic political face-off between an extreme progressive who'll be running against the more traditional Trump. This controversy is sure to deepen America's left-right rift, shattering the Democrats' fragile progressive coalition into a myriad of small hyper-special interest groups. Especially hard hit will be those who insist that they're truly special and actually deserve — demand — support from all progressives.

Correction 01-15-20 21:03 EST: A previous edition of this article gave the wrong name for one of the two transgender athletes in Connecticut. LifeSite regrets the error.