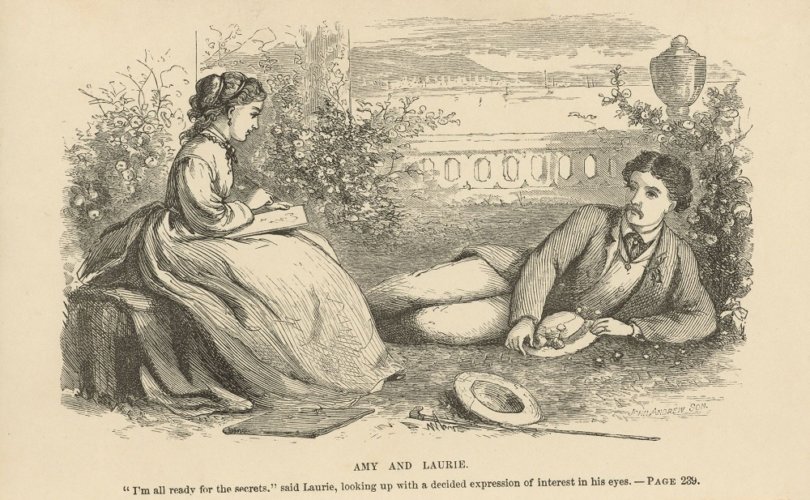 May 31, 2018 (LifeSiteNews) – How would Jo March have reacted to the legalization of abortion in Ireland?

Planet Earth desperately needs sane masculine and feminine role models and committed parenting, yet what do we celebrate instead? Feminists are exultant over their “victory” in Ireland.

Irish mothers can now abort their children, both female and male. Another triumph for womanhood, right? Keep unwanted males and religious zealots from uterus invasion – or so Emerald Isle women (and men) apparently now believe.

God help them. Is this the example we want for our girls and women? A once-Christian nation proclaims “freedom” when in reality, its people have willingly taken an evil yoke of bondage.

The year 2018 is the 150th anniversary of the publication of Louisa May Alcott's classic novel Little Women and so I pondered the narratives of modern feminism while watching the PBS re-make now airing on TV in the U.S.  I re-read my cherished girlhood copy of the novel to compare to the Masterpiece Theatre/BBC production.

I feared that estrogen-power-politics would be imposed on the original story of Civil War-era sisters navigating financial hardship, sibling conflict, and girlhood dreams during the absence of their beloved dad.

Yes, father hunger is a key element in this beloved American tale. Wouldn't today's headlines be different if more husbands stayed in the homes of their wives and children?  Girls raised on feminist revolution as well as the boy shooters of fellow students would perhaps handle life's challenges differently if more dads faithfully raised little women and little men.

And more humans would live as a result, both born and unborn.

Take, for example, the heroism of science teacher and football coach Jason Seaman, wounded three times as he tackled a male student shooter at Noblesville West Middle School in Indiana.

Girls and boys need the example of real-life action heroes, men willing to put themselves in harm's way for others. And there are still plenty of them, a fact that feminism activists would like to ignore.

I was concerned that PBS would turn Little Women lead character Jo into a hard, male-hating lesbian and the whole family would be mis-portrayed as warriors for women's rights. Thankfully, we were spared a nauseating assault of revisionist history pasted onto the wholesome story of the March girls, their adolescent trials and budding romances.

I was in fact pleasantly surprised at the three-hour film's general faithfulness to Alcott's tale. Similar to a scene in the novel, the mother, before traveling to her critically ill husband's bedside, tells her four daughters in the film, “Whatever may come to pass in Washington, you can never be fatherless under heaven.”

This powerful, unexpectedly Christian message would be extremely helpful if heeded by girls and women today.

And males. Men voted “yes” in Ireland, too. Some men are too quick to enable the illegitimate and unethical demands of female political activists.

Boy Scouts are dropping “boy” from their name. Young “drag queen” boys are YouTube and cable TV stars as they reject biology for a grotesque and artificial “femininity.”

And despite Trump's revocation of Obama's illegitimate open bathroom school order, courts are still issuing unlawful opinions to permit girls to enter boy bathrooms at will and vice versa. A federal judge in Virginia just ruled in favor of “Gavin” Grimm ( her birth name is Caitlyn) who has since graduated from the high school where she demanded entry to male facilities. The female Obama-appointed judge called the school's actions “sex stereotyping.”

It is not stereotyping to treat males and females as distinctly and beautifully different. Ironically, Grimm is self-stereotyping by insisting she could only use a male bathroom.

We are a tragically confused nation at a crossroads. As radical women spearhead movements to further devalue life, we keep having circuitous dialogues: “Why all the sexual assaults?” “Why are kids killing other kids?”

Yet authentic, responsible femininity is trashed and male leadership spurned even when it's available, stable, protective and nurturing.

Is America turning into a flabby, fleshly matriarchy?

Jo March would undoubtedly have opposed abortion as did the women's emancipation leaders of her day. Susan B. Anthony referred to it as among the great evils of her time.

So while women of all political persuasions appreciate Little Women for its touching portrayal of girlhood ambitions and relationships, here's hoping that the Judeo-Christian morality permeating the story rubs off on today's hardened feminists.

What creates character, for both men and women, is being an overcomer. And the first obstacle we always face is ourselves.

It's an unpopular notion among feminists, who feed on the raw meat of power and strength – seldom valuing humility and repentance.

Every Girl Scout should read Little Women, for instance. Learn to ask forgiveness and control your temper? Seeking God's guidance for patience and learning to accept His will, even the death of a beloved sister? These are the struggles tackled by the virtuous yet lively sisters in Little Women.

And the PBS series managed to capture the beauty and strength of this family. Mothers and fathers, daughters and sons of character don't often play well in 2018, but there they were on PBS in Little Women's original poignancy and sweetness.

If we heed its message, perhaps there's hope for us after all.