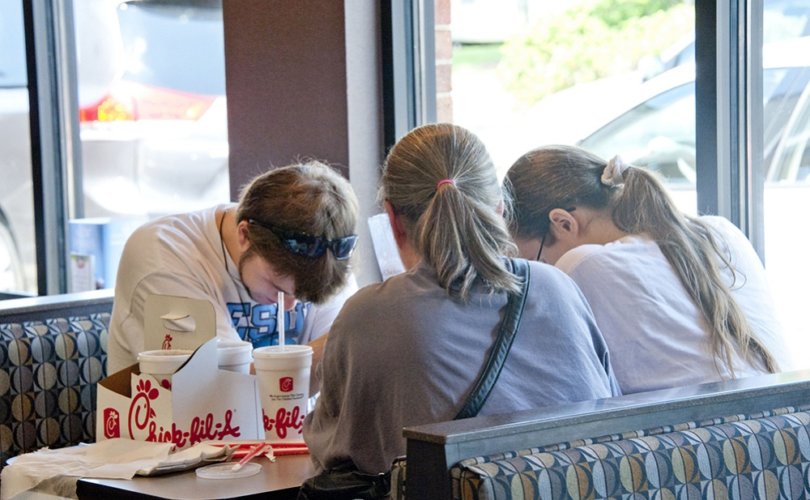 December 9, 2019 (USA TODAY) — In the spring of 1997 my parents sat me down, told me it was time to get a job and nudged me to apply to Chick-fil-A. At first, I was uncertain about working in fast food, but I liked Chick-fil-A's sandwiches and I embraced the company's biblical values.

From setting up a Salvation Army Angel Tree to donating food for church events, I had no doubt this was a God-honoring company. As a regular churchgoer, it was a plus that I would never face the pressure to work on Sunday — so I applied and was hired. On my first day, I found the company's purpose statement in the employee handbook: “To glorify God by being a faithful steward of all that is entrusted to us.”

Impressed, I asked my boss for the story behind it. He explained Truett Cathy's vision for founding a company that honors God in everything. In that conversation, I began to experience what it means to live out one's faith in the workplace. I knew I signed up to do more than sell chicken. That was the first of many such conversations over the next three years.

I never attended Cathy's Sunday school or even met him, but he influenced my walk with God nonetheless, and I'm sure the same is true for many of the chain's employees. I can only imagine the number of spiritual conversations that his “closed on Sunday” policy has sparked between parents and their children.

Sadly, those family conversations have changed dramatically recently. On Sunday Nov. 17, Chick-fil-A was closed, as usual, but on Monday the company's charitable arm cut off future donations to the Salvation Army and sent a check to the Covenant House, a group that has hosted a local Drag Queen Story Hour and celebrates LGBTQ pride.

A recent Chick-fil-A tax report also shows donations to various leftist groups or groups with leftist affiliations. But the biggest shock came when Chick-fil-A donated to the Southern Poverty Law Center (SPLC), a group with a track record of labeling Christians as haters or groups following Christian beliefs as “hate groups.” This is the same group that, in 2012, inspired a gunman to storm into the headquarters of my organization, the Family Research Council, and attempt to murder my colleagues and me and smash Chick-fil-A sandwiches on our faces.

That day I saw our building manager, Leo Johnson, covered in blood as he was rushed into an ambulance. Despite being seriously wounded, Leo heroically tackled the gunman, saving many lives.

The domestic terrorist shooter, Floyd Corkins, told the FBI he had picked the Family Research Council as a target from the Southern Poverty Law Center's website. He was angered by the Chick-fil-A Appreciation Day held recently, in which huge crowds lined up at Chick-fil-A's restaurants to show support for its president, Dan Cathy, who had expressed support for marriage defined as between a man and woman.

The SPLC even listed surgeon Ben Carson as an “extremist” until it backed down in the face of a public uproar. SPLC has paid out millions to settle defamation lawsuits, but it continues to maintain an online map and lists of groups and individuals it opposes. The organization has also faced accusations of corruption by former employees.

In spite of all this, Chick-fil-A is largely defending its donation to SPLC.

Some companies are still holding on

It's difficult to watch Chick-fil-A follow the path of many of its corporate peers.

In 2016, Chick-fil-A's board selected a new president, Tim Tassopoulos, who is a member of an advisory board for a Boy Scouts council (which has changed the name of its 11- to 17-year-olds program to Scouts BSA). The Scouts BSA has abandoned many of its values in recent years and has never looked back, even as the organization apparently moves closer to bankruptcy.

What does all this mean for youth looking to work their first job for a company that truly follows Chick-fil-A's purpose statement? If the third-largest fast-food restaurant chain in America can't hold on, is it possible for a business to operate by biblical principles? The answer is yes.

Hobby Lobby is an example. The family business went to the U.S. Supreme Court and won its case to operate according to its beliefs. There are numerous smaller businesses like Jack Phillips' Masterpiece Cakeshop. He politely declined to create a same-sex wedding cake and the state of Colorado tried to crush his shop. Jack also took his case to the U.S. Supreme Court and won.

Religious freedom is the right to live out your faith in every area of life, including the workplace. But that freedom is under assault. We can defend this freedom by exercising it. However, that requires courage, which comes through a relationship with God and reverence for his Word.

To today's teenage version of myself, I would say follow the example of three of the most courageous biblical figures — Shadrach, Meshach and Abednego. They refused to bow to King Nebuchadnezzar's image and as a result were thrown into a fiery furnace where God protected them from any harm. Their reverence for God was so strong that it overwhelmed fear. By following their example, you will be better equipped with the courage to glorify God in all you do.

JP Duffy is vice president of communications at the Family Research Council. Follow him on Twitter: @JPDuffy

Published with permission from USA TODAY.