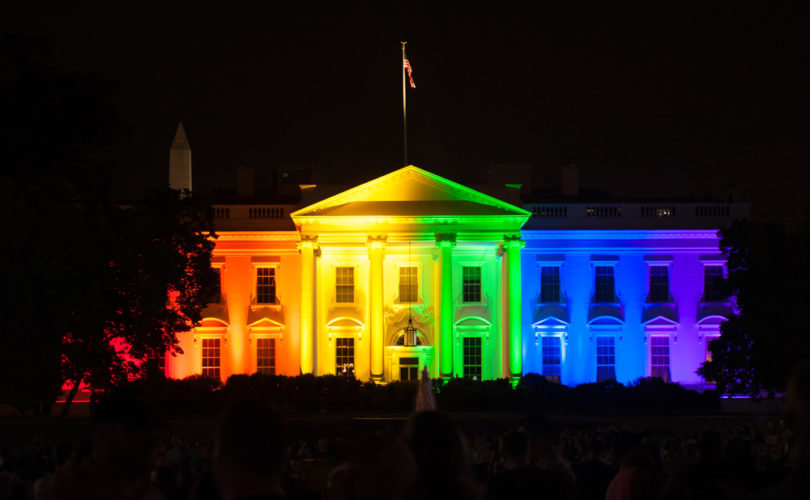 September 11, 2015 (ThePublicDiscourse) — On June 26, five justices of the Supreme Court found an unwritten “fundamental right” to same-sex marriage hiding in the due process clause of the Fourteenth Amendment—a secret knowledge so cleverly concealed in the nineteenth-century amendment that it took almost 150 years to find. Facebook and the White House were awash in rainbow flags proclaiming the arrival of “marriage equality.”

Just three weeks after Obergefell, congressional Democrats filed House (H.R. 3185) and Senate (S. 1858) versions of the “Equality Act,” seeking to add “sexual orientation” and “gender identity” to the protected classes listed in the federal code. Americans are on an “equality” roll. What could go wrong?

As it turns out, quite a bit. If enacted, the deceptively titled Equality Act would punish dissenters who disagree with same-sex marriage by using the enforcement tools of the amended Civil Rights Act of 1964, but with even greater force and scope. The Equality Act seeks to weaponize Obergefell, moving with lightning speed from a contentious five-to-four victory on same-sex marriage to a nationwide rule that “sexual orientation” and “gender identity” are privileged classes that give no quarter to Americans who continue to believe and seek to exercise their millennia-old religious belief that marriage and sexual relations are reserved to the union of one man and one woman.

The Contents of the Law

So, in concrete terms, what would the proposed law do? Here are just a few of the potential areas of impact, given how the Equality Act would amend various provisions of the Civil Rights Act:

– Public Education: would amend Title IV definitions of “desegregation” to include new protected classes for “sexual orientation” and “gender identity,” placing in the litigation crosshairs all sex-restricted facilities like dormitories, restrooms, or locker rooms.

– Sex: would enter a congressional finding that “federal agencies and courts have correctly interpreted [] prohibitions on sex discrimination to include discrimination based on sexual orientation, gender identity, and sex stereotypes,” thereby adopting the EEOC’s most aggressively extra-textual recent rulings.

Unlike ENDA, the Equality Act does not even feign an equal balancing of sexual liberty and religious liberty. Like some voracious legal Pac-Man, the Obergefell-fueled Equality Act devours any preexisting constitutional rights that might impede absolute victory in the march for “marriage equality”: speech, association, assembly, and the free exercise of religion. The Equality Act boldly declares that some constitutional rights are “more equal than others.”

We’ve been here before.

On January 22, 1973, seven justices of the Supreme Court found an unwritten “fundamental right” to abortion hiding in the due process clause of the Fourteenth Amendment and the shadowy “penumbras” of the Bill of Rights, a celestial phenomenon invisible to the non-lawyer eye. In the minutes and hours that followed, the New York Times predicted that Roe represented “an historic resolution of a fiercely controversial issue.”

But Roe did not resolve the fierce controversy of abortion. Instead, sexual revolutionaries suffered loss after loss when they rammed Roe into state and municipal policies restricting public funds or forced participation in the “fundamental right” of abortion. See, for example, Beal v. Doe (1977), Maher v.Roe (1977), and Poelker v. Doe (1977). This losing streak continued into the 1980s, when the Supreme Court affirmed the federal Hyde Amendment and state laws prohibiting the use of public facilities and public employees for elective abortions. See Harris v. McRae (1980) and Webster v. Reproductive Health Services (1989).

The Court’s underlying rationale was simple. It was also consistent with the Constitution as a “charter of negative liberties”: the right to have an abortion does not include the right to force taxpayers or conscientious objectors to participate in the process.

Moving into the twenty-first century, legislatures counterbalanced the “fundamental right” to abortion with more and more protections for conscientious objectors. These included (1) the Church Amendments prohibiting forced participation in abortion and sterilization procedures, (2) Public Health Service Act prohibitions on abortion-related discrimination in program funding, (3) Weldon Amendment protections for health providers who refuse to cover or refer for abortions, and (4) licensure and lawsuit protections for pharmacists who refuse to dispense contraceptive or abortifacient drugs.

In short, the unwritten right to abortion gradually approached equilibrium with the freedom to exercise religion—which, as Chief Justice Roberts pointed out, is “actually spelled out in the Constitution.” Today, pro-abortion and pro-life adversaries continue to litigate the points where the unwritten constitutional right to abortion collides with written constitutional rights to speech, association, assembly, and religion.

The Long War Ahead

On July 29, Catholic News Agency reported on statements made at the Out & Equal conference in San Francisco, where a speaker declared:

We are at a crossroads where the choices we make will mean we will fight religious exemptions for two to three years or have a protracted twenty-year struggle on our hands.

Despite the euphoric media reaction to “marriage equality” and the rush to enact the Equality Act before President Obama leaves office, the post-Obergefell trajectory will probably look less like a two-year dash to the finish line and more like the “protracted” timeline of post-Roe litigation and legislation. That is, the new “fundamental right” to same-sex marriage will be made to coexist alongside meaningful exceptions for religious dissenters.

I make this prediction for three reasons.  First, the vast majority of Abrahamic religious denominations in America—Catholic, Protestant, Evangelical, Jewish, Mormon, Muslim—continue to define marriage as the sacred union of one man and one woman, accounting for over 100 million Americans. For two millennia, Christians have based their definition of marriage on the “red letter” words of Jesus Christ, who incorporated ancient words from the Book of Genesis:

But from the beginning of creation, “God made them male and female.” “Therefore a man shall leave his father and mother and hold fast to his wife, and the two shall become one flesh.” So they are no longer two but one flesh.

Whatever the faith-distinctive term—sacrament, covenant, kiddushin, nikah—Americans in the growing Abrahamic denominations will continue to preach and seek to exercise their sincere religious belief that marriage is the sacred union of one man and one woman. Because marriage is a central tenet to all, religious liberty issues will persist and intensify in the post-Obergefell world.

Second, though politically potent in the short term, the analogy to interracial marriage is ahistorical and illogical. All of Christendom permitted interracial marriage until eighteenth-century slaveholders devised a political lie to suppress an inconvenient truth: one man and one woman can and do unite to create interracial children, so skin color is irrelevant to marriage.

Some southerners wrapped their racist politics in the rhetoric of religion, but an even larger coalition of Catholics, Protestants, and Jews brought an end to “racial purity” laws using direct appeals to shared religious principles. In fact, the very first case striking down an anti-miscegenation statute was brought by Roman Catholics who made religious liberty arguments against the state of California. Consequently, the “religious liberty equals racism” argument cannot withstand serious scrutiny.

Third, despite repeated attempts to meld the two into one “right side of history” campaign, the Sexual Revolution is not the Civil Rights Movement. Both started in the post-war boom and gained ground in the social upheaval of the 1960s and 1970s, but they share almost nothing else in common. They have different origins, different leaders, different objectives, and different legacies.

The former was rooted in the soil of the uniquely American Judeo-Christian tradition, spearheaded by Christian leaders, and was essentially “moderate” in its demands. It sought the restoration of civil rights won in the Civil War and ratified in the Thirteenth, Fourteenth, and Fifteenth Amendments, with additional, necessary protections for the mediating institutions essential to the African-American community: family, home, church, school, and business. In this way, the Civil Rights Movement was like the American Revolution, seeking to restore rather than destroy.

The former has achieved near-absolute victory in winning over the hearts and minds of the American people. The latter is mired in a continuous culture war, pitting sexual liberty against religious liberty in fights over pornography, divorce, abortion, and HHS mandates. The butcher, the baker, the candlestick maker are all forced into battle.

Polls now show that a majority of Americans favor sexual liberty and religious liberty. Because it decrees absolute victory for the sexual revolutionary without protecting the religious dissenter, the Equality Act is not a serious attempt to achieve equilibrium between the two.

In contrast, the First Amendment Defense Act (FADA) does nothing to upset the holding in Obergefell but does prohibit the federal government from discriminating against persons who continue to believe in man-woman marriage. This gives real effect to the closing words of Justice Kennedy’s majority opinion in Obergefell:

Finally, it must be emphasized that religions, and those who adhere to religious doctrines, may continue to advocate with utmost, sincere conviction that, by divine precepts, same-sex marriage should not be condoned. The First Amendment ensures that religious organizations and persons are given proper protection as they seek to teach the principles that are so fulfilling and so central to their lives and faiths, and to their own deep aspirations to continue the family structure they have long revered.

FADA is a better start to the long road ahead.

Matthew Kacsmaryk is Deputy General Counsel for the Liberty Institute in Dallas, Texas. He previously served as an Assistant United States Attorney for the Northern District of Texas. Reprinted with permission from The Witherspoon Institute.