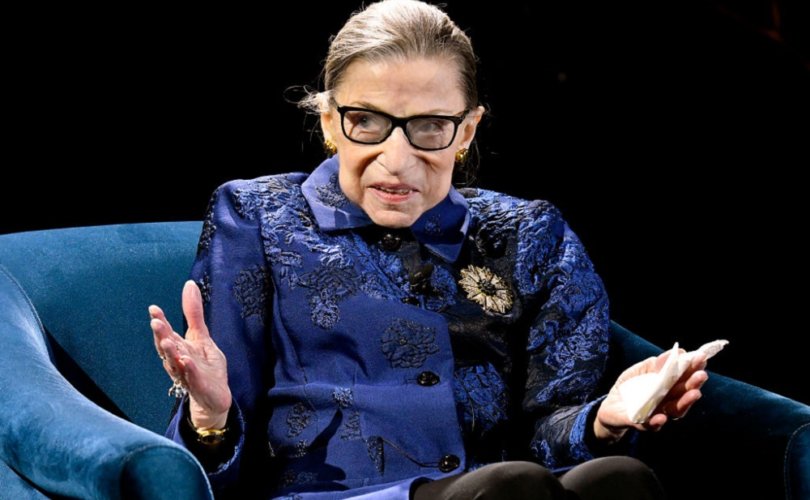 September 21, 2020 (The Bridgehead) — Supreme Court Justice Ruth Bader Ginsburg, an icon of the American Left, died of complications from pancreatic cancer on September 18, 2020 at the age of 87. Her passing was met with a wave of mourning from those who saw her as a titan of the Sexual Revolution. Hundreds gathered for a vigil in front of the Supreme Court, a mob marched on Mitch McConnell’s house, and social media exploded with grief and rage. Progressives who normally despise religion were suddenly overwhelmed with mystical superstition and called on those who are dedicated to legal abortion to “fight like she’s watching” and to “honor her dying wish” — which, apparently, was that her Supreme Court seat not be filled until the election is over.

I despise the tendency of some to greet the passing of prominent figures with cruelty and hatred. I thought it was grotesque when it was done to John McCain, George H.W. Bush, and Billy Graham, and grave-dancing in this case is just as repulsive (although, for the record, I have not seen a single pro-life or pro-family leader doing so). First and foremost, the death of any prestigious person at a high age should remind us that death is coming for all of us, no matter how old we get or how much power we wield. Like the vast majority of those commenting on Ginsburg’s death, I did not know her as a person and thus cannot pretend to grieve (I only saw her once, at a distance). But she has entered eternity, and that is a solemn and awful thought.

I also do not think we need to engage in false pretences as we examine her legacy. Some conservatives (including several pro-life figures) are taking cordiality too far by claiming that she was “an American legend” and that her alleged good intentions make her an admirable person. This is nonsense. Ruth Bader Ginsburg is a seminal American figure, yes — but in the same way that Margaret Mead, Alfred Kinsey, Margaret Sanger, Gloria Steinem, and other soldiers of the Sexual Revolution are. Ginsburg was, first and foremost, the staunch defender of a bloody abortion regime that has thus far accumulated a kill count of over 60 million pre-born children. She did so in an era in which we have the unprecedented power of observing the development of human beings in the womb. She knew better.

She voted to strike down a law banning partial-birth abortions in Nebraska, claiming that a “state regulation that ‘has the purpose or effect of placing a substantial obstacle in the path of a woman seeking an abortion of a nonviable fetus’ violates the Constitution.” (Partial-birth abortions involve delivering the body of the baby, keeping the head in the birth canal, cutting the skull open, and sucking the brains out.) She was a staunch defender of Roe v. Wade. She was an advocate of redefining reality according to the recently-invented ideology of trans activists. She began marrying same-sex couples prior to Obergefell v. Hodges, and made it clear that she was one of the LGBT movement’s staunchest allies in their quest to redefine America. The weakest members of American society — the pre-born — were threatened by her presence on the Court. The powerful elites had a reliable friend.

Now, of course, there are the politics. The meltdown began the night she died, and many are openly threatening civil war if Donald Trump attempts to fill the vacant seat prior to the election. Planned Parenthood called her a “revolutionary,” promised to “continue the work,” while NARAL stated that “everything is at stake.” Democratic senators spoke at the Supreme Court vigil, promising to fight a confirmation with everything they’ve got. Celebrity Beau Willimon declared that “[w]e’re shutting this country down if Trump and McConnell try to ram through an appointment before the election.” Reza Aslan tweeted out Mitch McConnell’s statement that a Trump nominee would get a Senate vote with the threat “Over our dead bodies. Literally.” In case anyone missed the point: “If they even TRY to replace RBG we burn the entire f—— thing down.”  Samantha Bee called it “the fight of our f—— lives.”

After the vile smearing of Brett Kavanaugh, none of this surprising. The sheer desperation on the Left is because abortion is their sacrament, and with Ginsburg’s passing, one of the abortion industry’s greatest defenders is gone. To put it bluntly: These people do not want to live in a nation that does not allow them to kill their babies. That may sound harsh, but it is true. Those are the stakes. That is where the rage is coming from. That is what is “at stake.” That “thing” that they are threatening to burn down? That’s the country. Some abortion activists are calling this a battle “for the soul of America,” and they’re right. But what they don’t seem to realize is that their threats are upping the ante. Moderate commentators like Meghan McCain have already noted that if you’re willing to threaten civil war to get your way, you’ve already signaled that conversation is impossible. Do we actually think that if Trump gets re-elected that they’ll accept his nominee then? This isn’t about RBG. This is about abortion. Again. The Left will ensure that this fight will make the Kavanaugh confirmation look like a campfire.

Several conservatives (including some, like Charles Camosy, whom I very much respect) are calling on the GOP to delay the nomination in order to bring the temperature in the country down. I understand the argument, but I wonder if we’re beyond that. This is no longer a battle between opposing sides that can agree to disagree. When it comes to the destruction of human life in the womb, the subjectivizing of gender, the redefinition of our fundamental, millennia-old institutions: This is about the very nature of reality, and who has the power to determine what sort of country everyone lives in. It is true that many GOP senators stated, while keeping Scalia’s seat open, that they would not vote on a SCOTUS nominee during an election year. It is also true that the Democrats’ treatment of Kavanaugh changed everything (as Lindsey Graham has already stated). They accused a good family man of being a gang rapist and engaged in character assassination without conscience. There is no doubt that the Democrats would absolutely attempt to fill the seat if they were in the same position.

As one pundit recently put it, the Right plays by rules invented by the Left, and the Left plays by no rules at all. Many of us observed, during the Kavanaugh hearings, that something in the country seemed to snap. The Democrats played every hand they had, and now their demands that decorum be observed because they want to win mean absolutely nothing. The Republicans are also trapped by events. As Eric Erickson observed, the GOP is stuck with two options: “If the GOP does not advance a nominee, the GOP burns. If the GOP confirms a nominee, the nation burns.” McConnell may not have the votes; the Democrats are threatening to expand the Supreme Court; we know that if they retake power, they will utilize every opportunity for brutal revenge. But the die may be cast, anyway. As Rod Dreher put it:

As a conservative and a Christian, I am all in for what McConnell proposes. I have said in this space before that as the country moves left, I believe the federal courts are going to be the last line of defense for religious liberty and the things for which social conservatives care most. The radicalization of the Democratic Party has deepened my conviction on this point. Thinking about the country, though, I cannot see how doing this before the election serves the common good. But: do we really have a common good anymore?

We all know the answer to that: We do not. There are two Americas, and one of them has just lost a warrior and an icon. One America believes in the founding ideals of the nation, the other believes America’s Founding was rotten to the core. One America believes in the republic as she was envisioned, the other believes that everything must be dismantled and torn down to bring about an entirely new nation based on an entirely new ideology. The Left warns that the credibility of the Supreme Court is at stake. But they care about the Supreme Court only as a tool to accomplish their agenda. It is ludicrous to believe that they would accept the validity of a pro-life Supreme Court — they do not accept the validity of the very concept of religious liberty now, despite the fact that the Court has consistently upheld it. Revolutionaries allow institutions to exist as long as they are useful — and then, as many progressives are openly saying, they burn them down. And why are we surprised that men and women who do not flinch at tearing apart babies would not flinch when it comes to butchering the Constitution?

There is some poetic justice that it is abortion that threatens the very stability of the world’s greatest superpower. If one believes in Divine justice, one must also tremble at the thought of God’s judgment on 60 million dead babies. America is coming apart at the seams, and the right to kill children is at the very root of it all. The Huffington Post ran a headline announcing the threat to abortion rights reading, in all capitals, “APOCALYPSE NOW.” Both sides recognize that this is a battle for the soul of America. But the two Americas have a very different idea of what constitutes Darkness and what constitutes Light. I suspect we will soon see Ginsburg’s followers in the streets, their faces lit by the flames they will use to fight for their right to utilize violence against the youngest and weakest members of the American family.