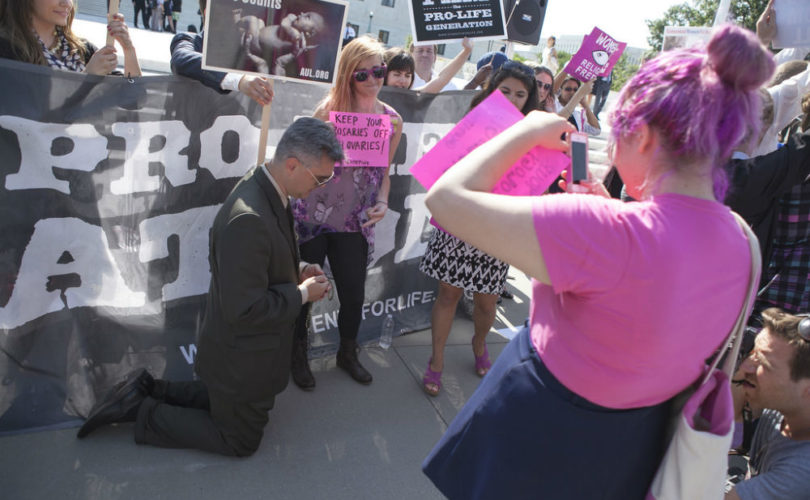 As expected, the highly anticipated decision on the Hobby Lobby case this past Monday brought all sorts of characters and the news media to the steps of the Supreme Court.

Pro-life and pro-abortion organizations were out in full force with both sides providing signs and matching T-shirts to their supporters and, of course, carrying the obligatory huge banners with their respective messages, web addresses, and Twitter handles emblazoned on them.

There were drums beating, chants being chanted, and smartly dressed #WomenInControl dominating the event and wielding bullhorns—despite the numerous microphones at their makeshift soapbox podium.

It was the battle of the #WomenInControl v. the #NotMyBossBusiness hash tags as well, with many young people tweeting away on their iPhones.

Of course, it wouldn’t be an official pro-abortion/pro-contraception event without the tired and predictable “Keep your rosaries off my ovaries” signs. One protestor was even dressed as a Bible holding a sign that read “Use me not for your bigotry.” This left many to wonder what actual bigotry has to do with forcing people to pay for someone else’s perverse lifestyle.

I’d like to think that these costumes and signs were probably made with craft supplies their parents bought for them at their local Hobby Lobby stores.

With all of the noise and racket going on, the event resembled more of a three-ring circus than it did a Supreme Court decision. And while this decision is a victory of sorts, there is much more work to be done. But the focus of my commentary isn’t the decision itself.

In the middle of all this, there was one incredibly sublime moment involving a man who was neither seeking any attention nor scheduled to speak at the event.

While many of the rally organizers stood there preening for the cameras, yelling through their bullhorns, and being as loud as possible, one man did the bravest thing any man or woman can do: He dropped to his knees, clutched his rosary, and asked the Virgin Mary and our Lord Jesus Christ for their help.

This simple act of faith drew media photographers away from the predictable protestors and provided a genuine unexpected photo opportunity.

That man is somebody I am proud to call a colleague and a friend. It was none other than American Life League’s own Michael Hichborn, director of our Defend the Faith project.

By the end of the day, photographs of Michael Hichborn’s humble display of prayerful duty were plastered all over the Internet, including TIME magazine, CNN, and the Huffington Post’s websites.

One particular image taken by our own photographer, Dwain Currier, depicted a troubled young woman holding her “rosary off my ovaries” sign, mockingly pointing at Hichborn while he prayed. I sincerely believe that the rosary Mike Hichborn was praying will one day help this young woman seek out God’s truth and become a witness to the sanctity of life herself.

Reprinted with permission from ALL.org.