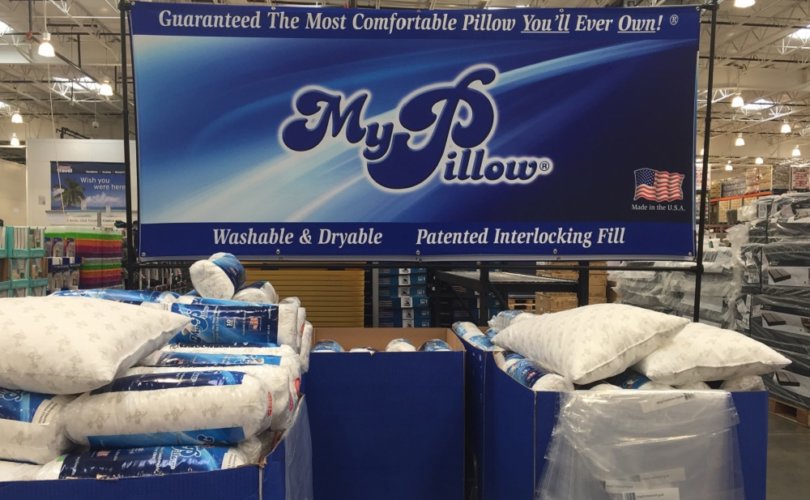 January 27, 2021 (Family Research Council) — If the cancel culture thought they'd have a pushover in Mike Lindell, they were mistaken. The MyPillow founder has never lost any sleep over the Left's attacks — and he doesn't plan to start now. When a handful of companies decided to drop the popular line over Mike's concerns over the 2020 election, he wasn't rattled. He just vowed to stand taller for any business who might be next.

It started over the weekend, when stores like Bed, Bath, and Beyond, Kohl's, HEB, Wayfair, and others abruptly decided to cut ties with the brand because of Lindell's outspoken support for Donald Trump. “As soon as I went public [with my frustrations about voter fraud], within a couple of days, all of these box stores got attacked…” For the most part, he doesn't even believe the complaints are real. What he has found is that these leftists just sit in a war room and create fake accounts that they can use to issue boycott threats to stores that carry certain products. “[It's] a hired hit job by the Left and cancel culture,” he said on “Washington Watch” — just hours before Twitter permanently banned his account.

These corporate executives, Mike shook his head, “They all live in fear. Everyone lives in fear. That's how cancel culture works.” At the end of the day, corporate America is so terrified of the liberal mob that they'll succumb to anything. “And they're the ones who end up losing, because their real customers are very upset when they [make political decisions to blacklist conservatives]. I'm hearing it [from] all over the country — people who are cutting up their credit cards [and switching brands] because of this targeting.” We can't let this happen, he insisted. We have to send a message. “So, I'm not backing down.”

And no one else should either. Look at what happened when Goya CEO Bob Unanue refused to apologize for his partnership with Donald Trump. The Left threw everything they could at the company, including Rep. Alexandria Ocasio-Cortez (D-N.Y.). And what happened? Americans rewarded Goya, sending sales 1,000 percent higher! Most CEOs are in such a hurry to do the mob's bidding that they don't stop to consider conservatives' buying power. They're playing the short game of appeasement, which almost always backfires. And they make these irrational decisions — alienating entire consumer bases — based entirely on fear.

“You know,” Mike pointed out, “I have 2,500 employees. We're like a big family. And they know — we've been down this road before. When I spoke out in the Rose Garden [about bringing] God back into our schools and reading our Bible, I was attacked then too.” Looking back, he said, “I guess it's good that we went through that before, so we know it's not real. People come out and support us [even more] — and the losers end up being the big box stores that thought they were satisfying the [Left]. [In the end,] they're losing out on the sales from the other stores that have stuck with us. They make the money, and they get the customers.”

A good example is Costco. “They [said], 'We're going to stick with MyPillow and with our contract.' And, boy, they're busier than ever… And so, people have to look at what's real and what's not.” In the meantime, Mike insisted, “I'm standing up for every business they think they [can boycott].”

When people call Mike and ask, “Is there hope?” Despite all that's happening in our country and to him personally, he doesn't hesitate. “Absolutely,” he tells them. “God's got his hand in all this. I put 100 percent of my faith in the Lord.” And we should too.

The cancel culture would love nothing better than to shut up Christians and drive them from the public square. That's a lot harder to do when we refuse to live in fear of anyone but God. “The Lord is on my side,” the psalmist says. “…What can man do to me?”

It takes a lot of courage to speak the truth when your livelihood is on the line. So when these business leaders are attacked — like Mike and Bob Unanue — we need to support them. Maybe you don't need another pillow or mattress pad — buy one anyway. There are so many spineless and cowardly people out there. When you actually find one who's going to stand up for their convictions — a pastor, business leader, or politician — stand with them. That's how we fight back. That's how we win.