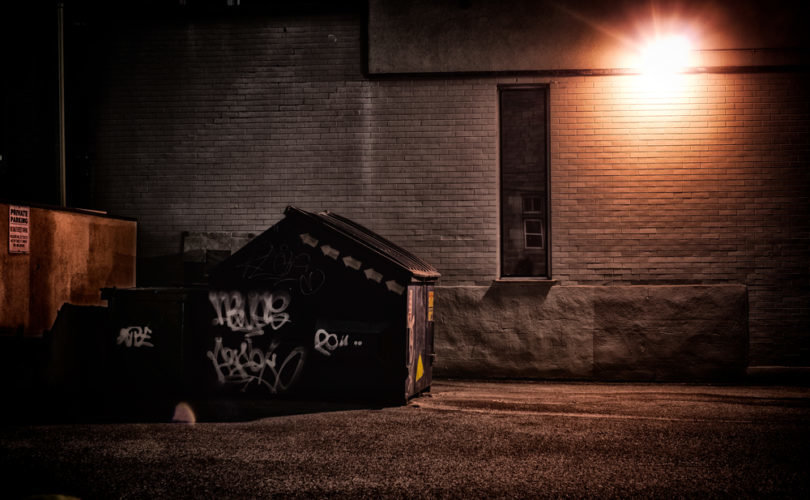 NEW YORK CITY, March 18, 2016 (LifeSiteNews) – A 28-year-old Staten Island woman admitted that she “threw away” her newborn baby in a garbage bag.

I'm deeply saddened, but I'm not surprised.  In a culture of death, children become disposable, literally.

Nausheen Rahman went to the emergency room bleeding, telling attendants that she had given birth in her home and “threw away” her baby. After New York Police found the baby in Rahman's trash, they charged her with concealment of a corpse. When the coroner deduced that the baby was alive when put in the garbage, Rahman was charged with second-degree murder.

The public was shocked. One neighbor told WNBC-TV, “It's terrible. And I'm shocked because this is a very good neighborhood.”  Another neighbor said, “Drop him off at any firehouse, go to the hospital, do something. A life deserves more than that.”

Why? Why were neighbors “shocked”? Ms. Rahman simply did what Planned Parenthood has been exposed for doing time and again, at huge profits.

The only difference between what Nausheen Rahman did and what Planned Parenthood does is gestational time (simply the child's development), the place of death (in or outside his mother's womb), the amount of money profited (one Planned Parenthood official is on record desiring to buy a Lamborghini from the profits of aborted babies' organs), and the number of dead babies disposed of: Rahman – 1;  Planned Parenthood – 327,653 annually.

Rahman is appropriately charged with murder, but Planned Parenthood not only doesn't get charged, but makes well over $154,000,000 every year from abortion alone – that's Planned Parenthood's own reported number of abortions (327,653), which is certainly only a fraction of the actual number of children the organization murders every year, multiplied by the average cost of a first-trimester abortion ($470).

Literally throwing away your baby has become a “growing trend” in the United States – despite laws allowing mothers to anonymously drop off their babies to safe shelters with immunity.

Last November, a newborn girl was buried alive in the Compton riverbed; she survived being thrown away. In October 2013, a dead baby was discovered in the bag of a 17-year-old teen suspected of shoplifting in Manhattan;  the same month, a newborn was found abandoned on the concrete in the backyard of a house in Queen's. In August 2013, a mother gave birth in a bar bathroom in Pennsylvania, left her baby in the toilet water, and went back to the bar to watch a fight on TV. In June 2013, newborns were discovered in trash cans in California and Arkansas; that same month, a mother gave birth in her toilet, threw the baby in her trash bag, and tossed the bag in a dumpster. In May 2013, a teenager threw away her newborn in her garbage can. In May 2013, a Pennsylvania teen tried to flush her baby down the toilet at school. In December 2012, a newborn child was found on the conveyor belt of a garbage sorting facility in California.

Horrifyingly, examples like this go on and on. Just Google “baby thrown away.” In a culture of death, children become disposable.

And why not?  Many abortion workers – funded by your tax dollars through our federal and state governments – have admitted that babies are routinely murdered after the “accident” of a failed abortion.  Douglas Karpen literally twisted their heads off;  Kermit Gosnell “snipped” their spinal cords.

Such mistreatment of children is to be expected from an industry that profits off killing the most innocent and vulnerable.  And when any society allows the killing to continue, bloodlust permeates the citizenry.

LifeSiteNews's own John Jalsevac noted that these crimes “stemmed directly from the abortionist's mentality[.] … To him there was little difference between killing them before or after birth.” Why? Because there isn't any difference.

Many people – even Christians – don't understand why God commanded the Israelites to rout the land of Canaan, killing every person and even all cattle. But the people of Canaan had been slaughtering their own children, sacrificing them to Baal, and that's something God does not take lightly. Just as the blood of Abel “cried out” to God “from the ground” (Genesis 4:10), so also the bloodguilt of child sacrifice infests the very ground of the nation that tolerates it.

How much innocent blood will be spilt before America as a nation either repents or is destroyed, I don't know. All I know is, I try to share the pro-life truth in love with others, condemning no one, and I do what I can to encourage a culture of life.

Including vote. Don't forget:  as both Democrat presidential contenders say, a vote for Clinton or Sanders is a vote for Planned Parenthood.