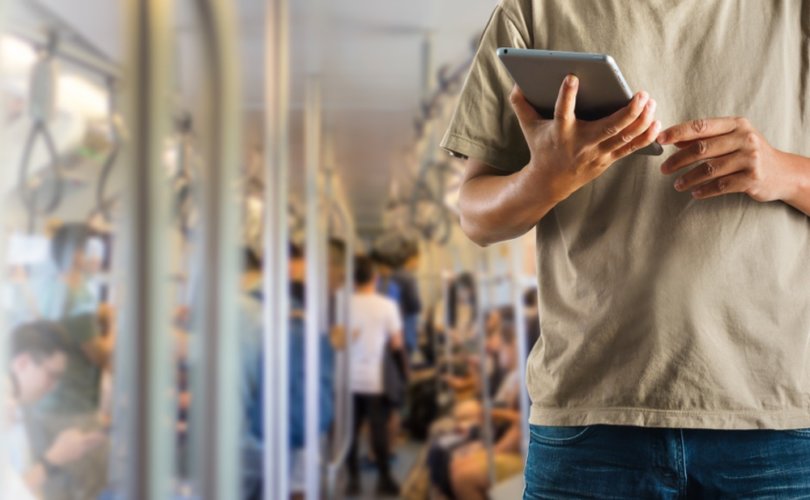 November 8, 2018 (KingdomWorks) – Recently news broke of a man on a train in Australia allegedly sexually assaulting a young woman by watching pornography on his smartphone.

He approached the woman who was sitting by a window.  After hovering over her for a brief time, he sat down.  He leaned against her, with his elbow pressing against her arm.

The man then put his phone on his lap and began viewing pornography for about five minutes. According to the woman, she saw the man’s eyes shifting between her and his phone several times. He got off the train without further incident.

Although this incident may seem trivial to you, be assured it is not. In fact, this man’s pornography viewing is a case of sexual assault.

According to the Rape, Abuse, and Incest National Network (RAINN), sexual assault is defined as any sexual contact or behavior that occurs without explicit consent of the victim. Any unwanted sexual contact, whether it is verbal, visual, or physical, is sexual assault.

Watching pornography is not harmless fun

Johnson added, “Viewing pornography and imitating what is depicted in the pornography have played a key role in the sexual victimization of women as well as to the physical abuse of women.”

“The mainstreaming of pornography since the 1950s directly coincides with the unprecedented explosion in sexual disease and a huge, exponential increase in new types of pornographic copycat sex crimes by and to juveniles and adults.”

Remember that sexual assault is any behavior that occurs without the explicit consent of the victim. And men are getting bolder about viewing sex in public or non-secluded places.

According to the New York Times, “It is an issue playing out not just at libraries, but in cafes and gyms, on airplanes, trains and highways, and just about any other place where the explosion of computers, tablets and smartphones has given rise to a growing source of dispute: public displays of mature content.”

In another instance a person reported being exposed to pornography while passing a vehicle on a busy interstate. The driver of the vehicle had his smartphone affixed to his dashboard, and was also streaming it to the screens in the backseat.

They worked at 12 agencies including the Department of Justice, NASA, Social Security Administration, and Department of Commerce.

These employees could have been caught by co-workers or even lost their jobs.

Johnson said, “The viewing of pornography reinforces impersonal sex, sex that is one-sided and selfish in nature, relying heavily on the user’s fantasy. The user of pornography imagines and fantasizes their personal interaction with the person or object represented in the pornographic material.

“Remember,” added Johnson, “that the persons depicted in pornography never interact with the user; they never talk back, make requests, place demands, or in any way control how the material is used. What is reinforced for the user of pornography is one-sided, superficial, controlling sexual experiences. Pornography is a compliant sexual partner!”

Zac Crippen of the Los Angeles Times summarized the problem.

“We can’t spend hours watching strangers engage in the most intimate of acts – often depicted without love or consent – and remain unchanged.”

The Conquer Series is helping over 750,000 men around the world find freedom from pornography. The cinematic series is packed with solid Biblical teaching, powerful testimonies, and challenging conversations.

Dr. Ted Robert’s is the host of the Conquer Series and has led thousands of men to freedom. As a former Marine Fighter Pilot, he uses stories from his life to describe the battle men face and how to find freedom.