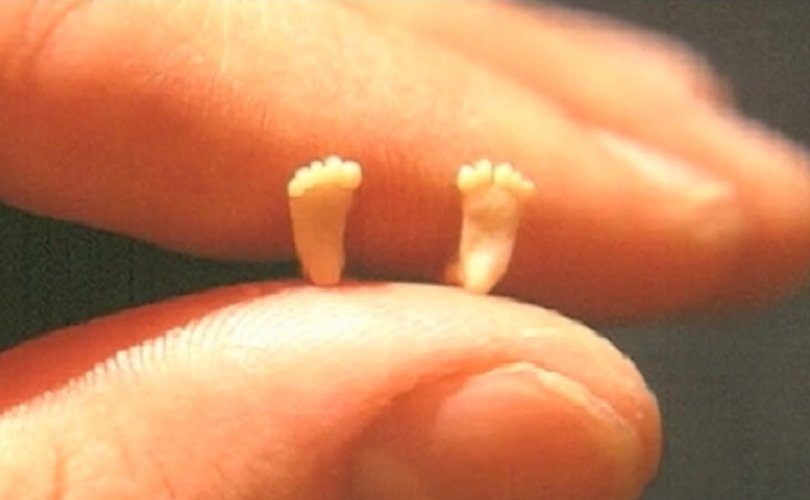 One of Dr. Sacco's iconic photos of an aborted baby.Dr. Russell Sacco

(LifeSiteNews) — It’s hard to imagine a less popular position than this one, but yes, state laws should allow for the prosecution of the adult woman who procures an illegal abortion, for the sake of the woman herself and for the sake of her older children. My wisdom comes from 15 years as a foster parent for the State of Tennessee.

This piece is a rebuttal to Prof. David Bonagura’s column entitled “Don’t Criminalize Women for Abortion,” published by The Catholic Thing on July 21.

Prof. Bonagura works from the presupposition that the woman who procures an abortion is no threat to the general public. His naiveté is understandable; most people do not understand the insidious way in which abortion affects the older children of the woman who aborts.

What would make a woman so desperate as to seek an illegal, dangerous abortion? I will tell you: her desire to maintain custody of her older children.

Every hospital in America routinely tests newborns for illicit drugs. If the baby tests positive, the hospital makes a referral to children’s services. The state then takes custody of the baby and the woman’s older children. If no suitable relative is available to take them, all the children go into foster care until the woman proves that she is clean and able to care for her children.

The woman who is pregnant and using illicit drugs knows all this. She knows that if she gives birth in a hospital, she will lose her baby as well as her older children. So she aborts the baby. The state is none the wiser, and her older children remain at risk for neglect and abuse. This happens all the time. The woman who procures an abortion may well be a threat to her older dependent children, not to mention future children she may conceive.

The use of abortion to hide the abuse and neglect of older children will continue unabated in states where abortion remains legal, but in pro-life states, we have a chance to intervene. At the very least, every illegal abortion must be referred to children’s services, so that the proper authorities may check on the welfare of other dependent children.

The mother and her child(ren) are not the only victims of abortion. The woman who aborts doesn’t just kill her own child. She kills someone else’s child. Someone else’s grandchild, niece or nephew, brother or sister. The state has a compelling interest in prosecuting all the perpetrators, in pursuit of justice for all the victims, while recognizing the mother’s peculiar role as both victim and perpetrator.

— Article continues below Petition —
DEFEND Mothers and Babies Against Powerful CEOs Paying Female Employees to Abort!
Show Petition Text
5497 have signed the petition.
Let's get to 6000!
Thank you for signing this petition!
Add your signature:
Show Petition Text

Prof. Bonagura employs a popular but false dichotomy: we can either offer the woman love, hope, and mercy or we can criminally prosecute her. I submit that the truly charitable thing is to do both. Prof. Bonagura argues that the woman who aborts needs healing through counseling, perhaps even psychiatry, but how shall we compel the woman to get what she needs apart from criminal prosecution?

Criminal prosecution need not result in jail time; the woman’s debt might be paid by submitting to a recovery program of her choosing which helps her transition to a healthy life. But treatment requirements are unenforceable outside the criminal-justice system.

Promiscuity, abortion, and drug addiction are all highly correlated. All are coping mechanisms for dealing with tragedy which, in turn, lead to greater tragedy. Each one feeds on the other in a destructive cycle that is incredibly difficult to break. In compassion, what would we do for the addict? The post-abortive woman is very likely to benefit from the same intervention. Post-abortive women need to be actively rescued through the criminal-justice system, not passively tolerated until they register for a Rachel’s Vineyard retreat.

Finally, Prof. Bonagura argues that the optics of criminally prosecuting post-abortive women would be terrible and may turn public opinion toward legalized abortion. I would argue that optics are irrelevant. The legacy media will crucify us no matter what we do. We must do what is right in the sight of God and do our best to persuade others of the rightness of our actions.

As pro-lifers, we contend that there is no difference between abortion and infanticide. Most Americans support criminal prosecution of the woman who kills her newborn baby. If we support prosecution for infanticide but not abortion, we concede a difference that isn’t real. Let’s just do the right thing and leave the consequences up to God.

Jennifer Hay is a Catholic mother of six children, none of whom are impressed with her career as a mechanical engineer for a Fortune 500 company, her four patents, or her pro-life activism.