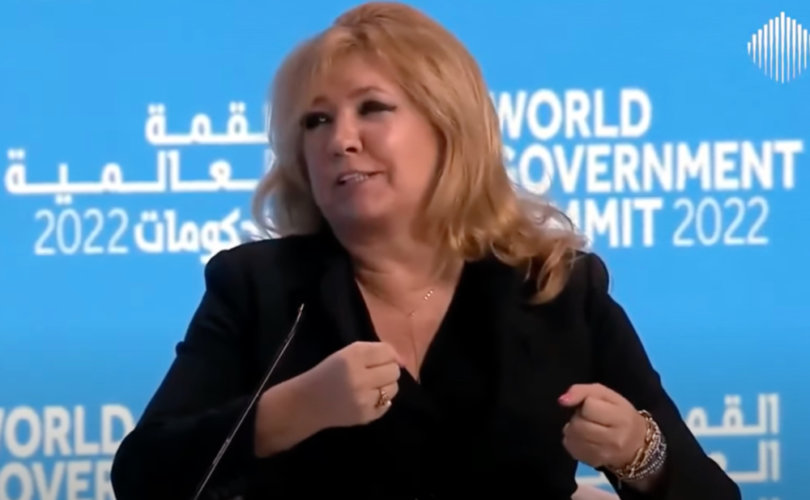 (Conservative Treehouse) – The World Government Summit 2022 took place on March 29 and 30 in Dubai, hosting more than 4,000 individuals from 190 countries, including senior government officials, heads of international organizations, and global “experts.”

The invited participants presented ideas and worldviews from within their various fields of specialty.

One presentation that needs to be highlighted was from Dr. Pippa Malmgren, an American economist who served as special advisor on Economic Policy to President George W. Bush. Her father, Harald Malmgren, served as a senior aide to U.S. presidents John F. Kennedy, Lyndon B. Johnson, Richard Nixon, and Gerald Ford.

In this segment, Mrs. Malmgren says the quiet part out loud. Yes, they are no longer hiding the construct; indeed, as you will hear they are saying quite openly what the future will look like.

Transcript – Dr. Malmgren: “What underpins a world order is always the financial system. I was very privileged. My father was an adviser to Nixon when they came off the gold standard in 71. And so, I was brought up with a kind of inside view of how very important the financial structure is to absolutely everything else.

And what we’re seeing in the world today, I think, is we are on the brink of a dramatic change where we are about to, and I’ll say this boldly, we’re about to abandon the traditional system of money and accounting and introduce a new one. And the new one. The new accounting is what we call blockchain.

It means digital, it means having a almost perfect record of every single transaction that happens in the economy, which will give us far greater clarity over what’s going on. It also raises huge dangers in terms of the balance of power between states and citizens.

In my opinion, we’re going to need a digital constitution of human rights if we’re going to have digital money. But also this new money will be sovereign in nature. Most people think that digital money is crypto, and private. But what I see our superpowers introducing digital currency, the Chinese were the first the US is on the brink, I think of moving in the same direction the Europeans have committed to that as well.

And the question is, will that new system of digital money and digital accounting accommodate the competing needs of the citizens of all these locations, so that every human being has a chance to have a better life? Because that’s the only measure of whether a world order really serves!”

The entry into a digital currency, needs a digital identity.

The end goal of a digital currency is why western political leaders have not been worried about following the COVID-19 spending demands from the World Economic Forum.

When the global trade currency does not need to be pegged to anything to determine value, it is completely fiat. This is the current problem with global trade and transactions taking place in U.S. dollars, which arbitrarily lifts the standard of life for Americans while providing no similar benefit to other nations.

A digital currency allows ultimate control on a global basis by a one world government, or western system of collective governments, that can assign value. No other mechanism will have as much control over the life of a person than a digital currency that will create a system of transactional credits and debits, perhaps also influenced by your social credit score.

The digital currency requires a digital identity in order for apportionment based on your value to society. This is essentially an extension of the Fabian mindset into the world of financial transactions and monetary evaluations.

Fabians believed that some form of socioeconomic tribunal would be needed in order for each citizen to be quantified according to their “worth” to society. The Chinese social credit score is a variant of that same concept.

The phrase “you didn’t build that,” when espoused by former President Obama and current Senator Elizabeth Warren is also based on this collective worldview. Both believe that individuals do not succeed independently, but rather gain their ability to grow wealth by using the resources of the larger society, infrastructure, labor and education.

The phrase “it takes a village” to raise a child, as espoused by Hillary Clinton is another variant of the same collective advocacy.

The implementation of a digital currency and digital identity is not a conspiracy theory, these “global leaders” are explaining it to us out loud. However, I am concerned that most will not hear it, or understand it, until it is too late.

Reprinted with permission from the Conservtive Treehouse