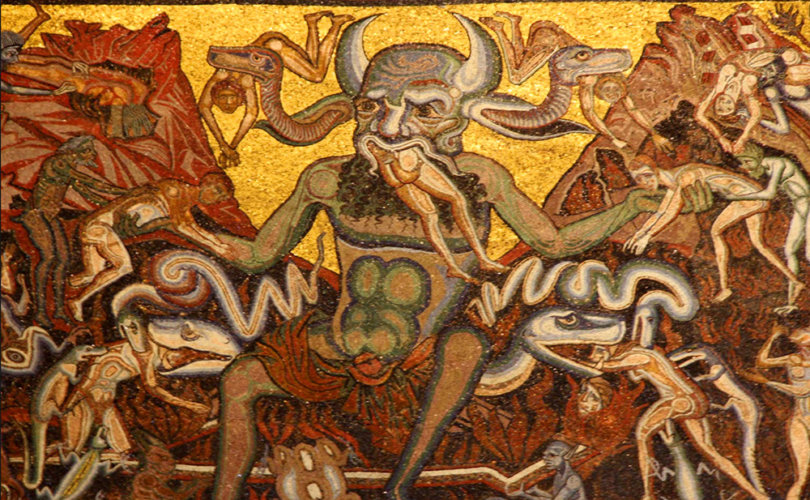 Dante Alighieri- Heart of the InfernoPinterest

This article by Sandro Magister was originally publshed in L'Ezpresso Magazine and is republished with permission. Magister is an Italian journalist who has for many years specialized in religious news, in particular on the Catholic Church and the Vatican.  His reports, from a faithful Catholic perspective, have been considered exceptionally reliable and are widely read. In 2008, 2009, and 2010, he oversaw the publication of three volumes with the homilies of Benedict XVI. From 2010 to 2013 he was a consulting producer for TV 2000, the television channel of the Italian episcopal conference. See the rest of his bio here.

NOTE: There is a link for each of the Pope Francis quotes cited in this article that takes the reader to the source of the quote or otherwise verifies statements in the article.

October 27, 2017 (Sandro Magister) — In the important newspaper “la Repubblica” of which he is the founder, Eugenio Scalfari, an undisputed authority of Italian secular thought, last October 9 returned to speaking in the following terms about what he sees as a “revolution” of this pontificate, in comments by Francis that are derived from his frequents conversations with him:

“Pope Francis has abolished the places where souls were supposed to go after death: hell, purgatory, heaven. The idea he holds is that souls dominated by evil and unrepentant cease to exist, while those that have been redeemed from evil will be taken up into beatitude, contemplating God.”

“The universal judgment that is in the tradition of the Church therefore becomes devoid of meaning. It remains a simple pretext that has given rise to splendid paintings in the history of art. Nothing other than this.”

It is seriously doubtful that Pope Francis really wants to get rid of the “last things” in the terms described by Scalfari.

There is in his preaching, however, something that tends toward a practical overshadowing of the final judgment and of the opposite destinies of blessed and damned.

On Wednesday, October 11, at the general audience in Saint Peter’s Square, Francis said that such a judgment is not to be feared, because “at the end of our history there is the merciful Jesus,” and therefore “everything will be saved. Everything.”

In the text distributed to the journalists accredited to the Holy See, this last word, “everything,” was emphasized in boldface.

At another general audience a few months ago, on Wednesday, August 23, Francis gave for the end of history an image that is entirely and only comforting: that of “an immense tent, where God will welcome all mankind so as to dwell with them definitively.”

An image that is not his own but is taken from chapter 21 of Revelation, but from which Francis was careful not to cite the following words of Jesus:

“The victor will inherit these gifts, and I shall be his God, and he will be my son. But as for cowards, the unfaithful, the depraved, murderers, the unchaste, sorcerers, idol-worshipers, and deceivers of every sort, their lot is in the burning pool of fire and sulfur, which is the second death.”

And again, in commenting during the Angelus of Sunday, October 15 on the parable of the wedding banquet (Matthew 22: 1-14) that was read at all the Masses on that day, Francis carefully avoided citing the most unsettling parts.

Both that in which “the king became indignant, sent his troops, had those murderers killed and their city burned.”

And that in which, having seen “one man who was not wearing the wedding garment,” the king ordered his servants: “Bind him hand and foot and throw him out into the darkness; there shall be weeping there, and gnashing of teeth.”

On the previous Sunday, October 8, another parable, that of the murderous vine dressers (Matthew 21:33-43), had undergone the same selective treatment.

In commenting on the parable during the Angelus, the pope left out what the owner of the vineyard does to those farmers who killed the servants and finally the son: “He will put those wretches to a miserable death.” Much less did he cite the concluding words of Jesus, referring to himself as the “cornerstone”: “He who falls on this stone will be broken to pieces; but when it falls on any one, it will crush him.”

Instead, Pope Francis insisted on defending God from the accusation of being vindictive, almost as if wanting to mitigate the excesses of “justice” detected in the parable:

In the homily for the feast of Pentecost, last June 4, Francis argued, as he often does, against “those who judge.” And in citing the words of the risen Jesus to the apostles and implicitly to their successors in the Church (John 20:22-23), he intentionally cut them off halfway through:

“Receive the Holy Spirit. Whose sins you forgive, they will be forgiven.”

“Those you do not forgive, they will not be forgiven.”

And the fact that the truncation was deliberate is proven by its repititon. Because Francis had made the exact same deletion of the words of Jesus on the previous April 23, at the Regina Coeli of the first Sunday after Easter.

Last May 12 as well, while visiting Fatima, Francis showed that he wanted to set Jesus free from his reputation as an inflexible judge at the end of time. And to do this he warned against the following false image of Mary:

“A Mary of our own making: one who restrains the arm of a vengeful God; one sweeter than Jesus the ruthless judge.”

It must be added that the liberty with which Pope Francis cuts and stitches up the words of Sacred Scripture does not concern only the universal judgment. Deafening, for example, is the silence in which he has always shrouded Jesus’ condemnation of adultery (Matthew 19:2-11 and parallel passages).

In a surprising coincidence, this condemnation was contained in the Gospel passage that was read in all the churches of the world precisely on the Sunday of the beginning of the second session of the synod of bishops on the family, October 4, 2015. But neither in the homily nor at the Angelus on that day did Pope Francis make the slightest reference to it.

Nor did he make any reference to it at the Angelus of Sunday February 12, 2017, when that condemnation was once again read in all the churches.

Not only that. The words of Jesus against adultery also do not appear in the two hundred pages of the post-synodal exhortation “Amoris Laetitia.”

Just as no appearance is made in it by the terrible words of condemnation of homosexuality written by the apostle Paul in the first chapter of the Letter to the Romans.

A first chapter that was also read – another coincidence – at the weekday Masses of the second week of the synod of 2015. To tell the truth, those words are not included in the missal. But in any case, neither the pope nor anyone else ever cited them while discussions were being held at the synod about changing the paradigms of judgment on homosexuality:

“Therefore, God handed them over to degrading passions. Their females exchanged natural relations for unnatural, and the males likewise gave up natural relations with females and burned with lust for one another. Males did shameful things with males and thus received in their own persons the due penalty for their perversity. And since they did not see fit to acknowledge God, God handed them over to their undiscerning mind to do what is improper. They are filled with every form of wickedness, evil, greed, and malice; full of envy, murder, rivalry, treachery, and spite. They are gossips and scandalmongers and they hate God. They are insolent, haughty, boastful, ingenious in their wickedness, and rebellious toward their parents. They are senseless, faithless, heartless, ruthless. Although they know the just decree of God that all who practice such things deserve death, they not only do them but give approval to those who practice them” (Romani 1, 26-32).

Moreover, at times Pope Francis even takes the liberty of rewriting the words of Sacred Scripture as he sees fit.

For example, in the morning homily at Santa Marta on September 4, 2014, at a certain point the pope attributed to Saint Paul these “scandalous” words: “I boast only of my sins.” And he concluded by inviting the faithful present to “boast” of their own sins, in that they have been forgiven from the cross by Jesus.

But in none of Paul’s letters can such an expression be found. The apostle instead says of himself: “If it is necessary to boast, I will boast of my weaknesses” (2 Corinthians 11:30), after having listed all the hardships of his life – the imprisonments, the floggings, the shipwrecks.

Or: “About myself I will not boast, except of my weaknesses” (2 Corinthians 12:5). Or again: “He said to me: ‘My grace is enough for you; strength is in fact made fully manifest in weakness.’ I will therefore gladly boast of my weaknesses, so that the power of Christ may dwell in me” (2 Corinthians 12:9), with more references to the outrages, persecutions, anguish he has suffered.

Coming back to the final judgment, Pope Benedict XVI also acknowledged that “in the modern era, the idea of the Last Judgement has faded into the background.”

But in the encyclical “Spe Salvi,” which he wrote entirely on his own, he forcefully reaffirmed that the last judgment is “the decisive image of hope.” It is an image that “evokes responsibility,” because “grace does not cancel out justice,” but on the contrary “the question of justice constitutes the essential argument, or in any case the strongest argument, in favour of faith in eternal life,” because “with the impossibility that the injustice of history should be the final word does the necessity for Christ's return and for new life become fully convincing.”

“Grace does not make wrong into right. It is not a sponge which wipes everything away, so that whatever someone has done on earth ends up being of equal value. Dostoevsky was right to protest against this kind of Heaven and this kind of grace in his novel ‘The Brothers Karamazov.’ Evildoers, in the end, do not sit at table at the eternal banquet beside their victims without distinction, as though nothing had happened.”