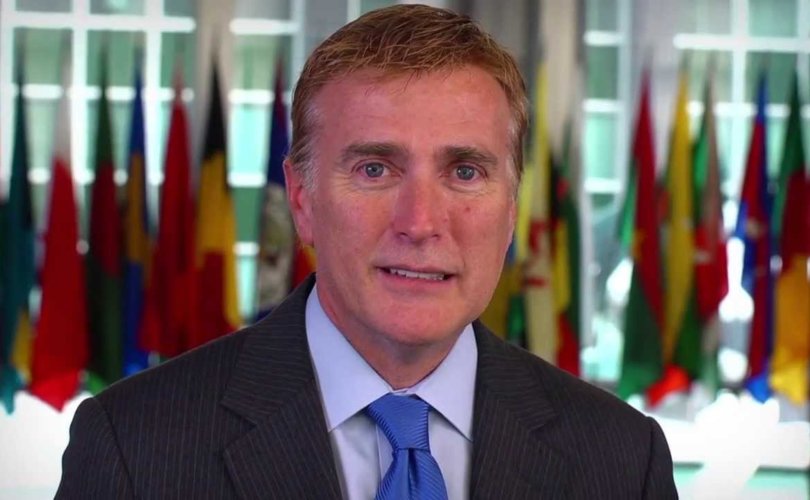 Wally Brewster, ambassador to the Caribbean nation, is a known gay rights activist.

The latest example of the United States forcing LGBT views upon smaller countries who depend on American aid and trade comes from the Dominican Republic.

In 2013 President Obama appointed Wally Brewster Ambassador to the Caribbean nation of 10 million people. Mr Brewster, a top LGBT fundraiser for the President, took up residence with his husband, Bob Satawake. Both men had been gay rights activists back in the US.

They have brought a reforming zeal to the Dominican Republic. This week the New York Times ran a  profile of Mr Brewster, painting him as a benevolent tutor in human rights for a benighted, largely-Catholic nation. It closed with a note of gratitude to the ambassador from a young gay man: “I have no words to thank you for being here and give me and my lover hope to fight and stay together.”

What was missing in the flattering profile is a long list of complaints in the local media about the bullying tactics used by Mr Brewster to promote LGBT rights, ranging from outright threats to creating and funding local organisations.

• The embassy funded and launched a local LGBT Chamber of Commerce on March 2. The director of USAID, the agency which dispenses American foreign aid, Alexandria Panehal, said that she was making a million US dollars available for the LGBT community and political candidates who would support LGBT policies. The US Embassy quickly denied that this would happen – but it did not deny that Ms Panehal had promised financial help to LGBT candidates.

• Last year Mr Brewster, at a Thanksgiving Day address to the US Chamber of Commerce in Santo Domingo, the capital, responded to “a few politicians who have criticised the embassy and myself for being too involved in Dominican affairs”. He said that the close relations between the two countries and the huge US investment in the Dominican Republic gave him every right to do so. He taunted his critics, telling them “go to the embassy and give us back your visa”.

Strong-arming smaller countries into accepting LGBT rights is an explicit element in the Obama Administration’s foreign policy. The half-dozen gay US ambassadors, including Mr Brewster, have openly acknowledged that trade agreements are being used to advance “equality” and “tolerance” for gays and lesbians. “We know firsthand that US interests are best served when we pursue policies that also advance our values. That’s why trade policy is among our most promising tools,” they say on the White House website.

One sentence in Mr Brewster’s Thanksgiving Day speech summarised the LGBT neo-colonialism that is becoming a hallmark of US diplomacy around the world: “Our two countries are interwoven so intricately, at times it is impossible to tell them apart.”

For Dominicans these words must have an ominous ring. The blustering Ambassador has obviously not read the history of the nation in which he resides. Over the last 100 years, the United States has trampled upon the sovereignty of the Dominican Republic time and time again. Forget about “intricate interweaving”. Too often “What's yours is mine and what's mine is my own,” has been the theme of US-Dominican relations. Only abysmal ignorance or towering arrogance explains Mr Brewster’s insensitivity to Dominican sovereignty.

Has he not read his own history?

In 1916 the US invaded the Dominican Republic and ruled it until 1924. The occupation was largely benevolent, but was resented by Dominicans. For several years there was guerrilla resistance which was harshly repressed.

From 1930 to 1961, the country was ruled by a corrupt tyrant, Rafael Trujillo. Bad as he was the US supported him. “He may be a son of a bitch, but he’s our son of a bitch,” Secretary of State Cordell Hull reputedly said. But the US eventually tired of Trujillo, withdrew its support, and he was assassinated, possibly with CIA support.

In 1965 President Johnson ordered another invasion, although US troops withdrew a few weeks later.

In other words, based on the experience of the last hundred years, Dominicans have well-founded fears of American economic, cultural, political and military domination. In a recent public statement the Catholic bishops of the Dominican Republic complained bitterly that LGBT pressure from the American Embassy is eroding the country’s sovereignty.

As the bishops point out, so sensitive are the Dominicans to foreign meddling that non-interference is written into the country’s constitution:

The sovereignty of the Dominican Nation, a State free and independent of any foreign power, is inviolable. None of the public powers organized by this Constitution may realize or permit the realization of acts that constitute a direct or indirect intervention in the internal or external affairs of the Dominican Republic or an interference that infringes the personality and integrity of the State and of the attributes that are recognized and consecrated in this Constitution. The principle of non-intervention constitutes an invariable norm of Dominican international policy.

The bishops have insisted that Dominican government lodge an official protest against the American ambassador’s high-handed attempts at a cultural revolution. It can’t come too soon.