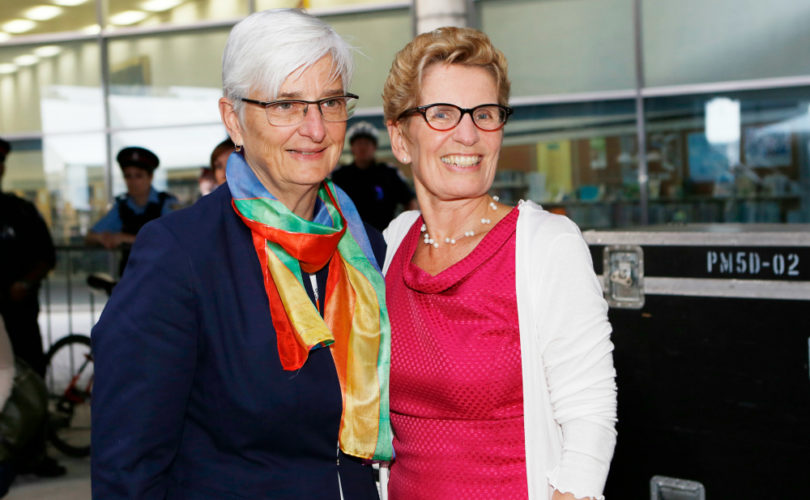 June 6, 2018 (LifeSiteNews) – My opinion, as a scholar with a keen sense of living history from ancient times to the present moment is that the 41st Ontario Parliament which was just dissolved for the current Ontario election will go down in history as the most totalitarian-oriented government ever seen in a democracy.

The current worldwide trend of ‘Creeping Totalitarianism’ which has been building up to this point for decades (since the West started ignorantly implementing policies first implemented by the totalitarian Soviets and Nazis), came to a head in Wynne’s Liberal- controlled 41st Ontario Parliament. With the wholehearted support of the NDP, and unopposed by the “Official Opposition” PCs under Patrick Brown, this government enacted a large series of totalitarian-oriented laws and policies which have set up Canada’s most populous province for a totalitarian-oriented future.

It should come as no surprise to thoughtful citizens that the foundational principles of Human Rights and Democracy begin with the equal precious value of every human. Added to this is the necessity that every human be free from government coercion in matters of belief (freedom of thought/religion) in order to freely seek and find the truth that every human is equally precious. This obligates governments to protect and serve all precious humans. In this context, totalitarian government (and bigoted hatred or violence against any group of humans) is unthinkable.

But in Wynne’s Liberal Ontario (with full NDP approval), doctors can lose their jobs for following the 2500-year-old Hippocratic Medical Tradition that doctors do not kill patients. Through numerous totalitarian-oriented policies and laws the government effectively declares it “owns” Ontario children. Without mandate it will even indoctrinate children in new pseudo-scientific ideology and radical new values with no history in the culture despite parental objections, using convicted pedophile sex abuser and child pornographer Ben Levin’s “Sex Ed” curriculum as part of its totalitarian-style “social engineering.” Even science and culture have been re-written by this government which has no concept of representative democratic government “of the people, by the people, for the people.”

Even the elected representatives “of the people” from all three parties were whipped into passing such laws. Parents aware of Bill 89 rightly fear their children can now be taken away for traditional child-rearing in traditional values which the government no longer considers “in the best interests of the child.” And peaceful Human Rights advocates (like Cyril Winter who died awaiting trial) are arrested just for holding signs reading “freedom of expression and religion. no censorship” and “God save our charter rights.”

Democratic freedom of conscience has been stripped from doctors and democratic freedoms of assembly, speech, expression and religion have been stripped from pro-life human rights advocates. This has been partially accomplished due to gross ignorance of facts by provincial leaders, like the 1948 Declaration of Geneva, which was adopted because the Nazi government had de-criminalized abortion and euthanasia. The declaration reiterated the ancient non-killing Hippocratic Medical Tradition in the doctor’s promise “I will maintain the utmost respect for human life, from the time of conception.” In the same year, the Nuremberg Trials condemned the Nazis for legal abortion as “a crime against humanity.” Also that same year, the UN’s Universal Declaration of Human Rights declared Human Rights were for all humans “without distinction of any kind” because “recognition of the inherent dignity and of the equal and inalienable rights of all members of the human family is the foundation of freedom, justice and peace in the world.”

Wherever abortion is legal, killing humans is not viewed as wrong because humans are not inherently precious. Thus, the logical end result of legal abortion is Ontario Bill 163 which means anyone can be arrested and jailed for saying “killing humans is wrong because humans are inherently precious” anywhere within up to 150m of an abortion facility. Cyril was arrested just for upholding free speech. Following totalitarian Soviet and Nazi precedent of de-criminalizing abortion logically yields totalitarian results, such as ending free speech by arresting pro-life human rights advocates.

Hence it is not surprising the U.S. State Department has noted Canadian laws, and specifically, in Ontario, are threatening religious freedom.

My scholarly prediction is that the 41st Ontario Parliament will ultimately result in new “Wynne Treason Laws.” Or, perhaps such laws will be called “Wynne-Trudeau Treason Laws,” since Prime Minister Trudeau, who admires totalitarian Cuba and China, has made no secret of how much he admires Premier Wynne, whose totalitarian-oriented policies Trudeau emulates.

Editor's note: William Baptiste is the founder of Human Rights and Freedoms Forever! and the author of DEMOCRACY 101: A Voter’s and Politician’s Manual for LASTING Democracy (available on Amazon.com) (Contact: [email protected]).