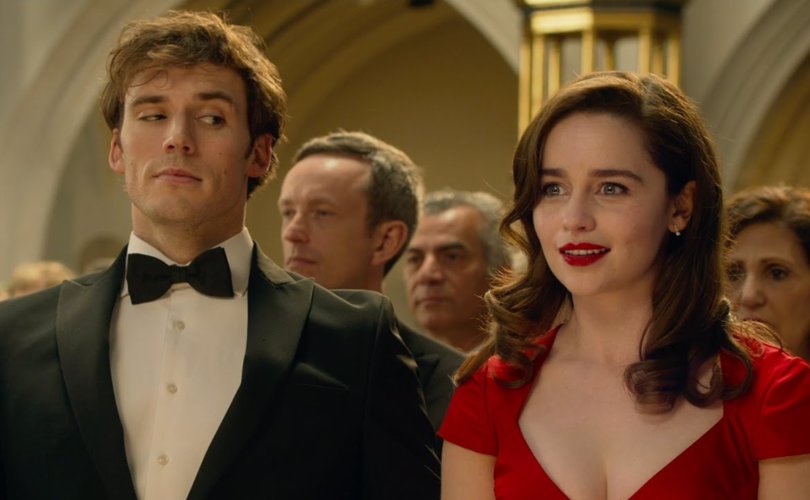 Main characters Will Traynor and Louisa Clark in Me Before You

That’s what my friend texted me who had told me about the book, and soon-to-be-released movie, “Me Before You.”  She suggested I read it, not because under normal circumstances it would be worth my time (or hers), but rather because she had just attended a pro-life apologetics presentation I gave on assisted suicide and euthanasia and she thought I should be aware of the story as my future audiences might bring it up.

So on the weekend, as it poured rain, I curled up and got caught up in the world of the main characters Louisa Clark and Will Traynor.  So would I recommend it?  Absolutely not.  It’s dangerous—very dangerous.  Setting aside the obvious problems of blasphemous language and sexual references, the storyline supports assisted suicide—but it does so in a sneaky way, making it all the more dangerous.

Initially Louisa, hired to be a companion and helper to wheelchair-bound Will, was my hero.  She was from a family that, while it had its own dysfunctions, overall lived a self-less philosophy:

Louisa worked so as to help provide for her poverty-stricken family.  You before me.

Her parents welcomed her sister home when faced with an unplanned pregnancy, and helped care for their grandson.  You before me.

Her mom quit work to care for the family’s ailing grandfather.  You before me.

But the world of you before me was about to collide with another world—the ugly world of me before you.  The Traynor family had it all—by the world’s standards: unlimited wealth and the ability to go wherever and do whatever.  But they were all miserable because they lacked love:

Mr. Traynor was having an affair (not his first).  Me before you.

When Will’s sister Georgina visits and learns of his plan to have assisted suicide in 6 months she gets angry that he would do it, but instead of using the 6 months to give him the gift of time, attention, and love, to try to convince him he’s valuable and should stay alive, she returns to Australia saying, “…this was just a visit…It’s a really good job…the one I’ve been working toward for the past two years…I can’t put my whole life on hold just because of Will’s mental state.” Me before you.

Will himself, pre-accident, lead a life of self-indulgence.  Me before you.

So why was Louisa my hero initially? When she learns that the parents have agreed to assist Will in his suicide in 6 months’ time, she quits because she doesn’t want to be part of killing.  Louisa, you’re my hero.  Then she decides to return to work, realizing she can spend the next few months trying to make Will’s life as incredible as possible so he doesn’t choose suicide.  Louisa, you’re my hero.  Then she takes Will on a life-creating and spirit-building vacation and tells him she wants to devote her life to loving and serving him, but he refuses saying he still plans to commit suicide, so she cuts him off in a decision to remove herself from the killing.  Louisa, you’re my hero.

But then it all goes downhill.  And I understood why my friend said “It’s going to make you raaaaaaaage.”  Almost every single character caves.  Mr. and Mrs. Traynor, Georgina, Mr. Clark, Louisa’s sister. And Louisa herself.  They all cave.  They all encourage, facilitate or are actually present at Will’s suicide the way he wants it.

And a morally un-formed reader will think, “Maybe it’s not so bad after all. Maybe, by being present, that was the loving thing to do.”  No, no it’s not.  Would they have been present if Will was killing a child?  Then why would they be present when Will killed himself?  His life is just as unrepeatable, and just as irreplaceable, as a child’s.  Life, whether our own or someone else’s, is not ours to take.  Moreover, Will couldn’t have gotten to the suicide clinic without their help.  So his act of suicide actually turned into their act of homicide.  Had they refused to “help” him, especially when, as a result of Louisa’s involvement in his life, he admitted those were the best 6 months of his entire life, Will may have gone on to thrive in a world of human connection and a world of you before me.  But we will never know.  Because he’s dead.  And they helped kill him.

Will was obsessed with control, and argued he needed to end his life because it was the one thing he could control.  But he could control more than death—he could control his perspective.  Holocaust survivor Dr. Viktor Frankl wrote in his book, “Man’s Search for Meaning,” that “everything can be taken from a man but one thing: the last of the human freedoms—to choose one’s attitude in any given set of circumstances…”

When someone is despairing so much that they can’t see they can choose their attitude, it’s the job of people who care to help them see this, not to feed into despair.  As one palliative care website says for why they don’t allow or encourage assisted suicide, “In our experience, the issue of physician-assisted suicide often arises as a response to a complex set of problems which we help people sort through and address.”  If only Louisa et al had helped Will sort through and address his problems.

So when the movie is released this Friday, and unsuspecting movie-goers who’ve seen the trailer may have no clue it’s actually about assisted suicide, please boycott the film and encourage others to do the same.  And when someone asks why, you could begin by explaining, “You before me is better than me before you…”

Stephanie Gray is an international pro-life speaker who has presented in Costa Rica, Latvia, Austria, England, Ireland, and across the United States and Canada (where she resides in the Lower Mainland of BC).  She has debated abortion doctors and professors at universities across North America and in England, and is faculty at Blackstone Legal Fellowship, training law students from around the world about conversing persuasively on abortion.  Stephanie is author of “Love Unleashes Life: Abortion & the Art of Communicating Truth.”  Learn more at www.stephaniegray.info. This article is reprinted with permission.