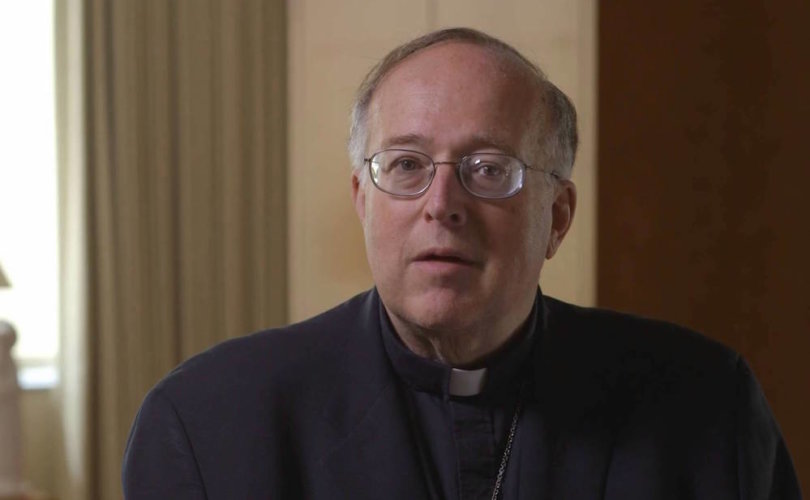 The Orlando massacre is a call for Catholics to 'combat' their 'anti-gay prejudice,' according to Bishop Robert McElroy.

June 16, 2016 (LifeSiteNews) – The horrible massacre that occurred in Orlando over the weekend has shaken the United States.  Faith leaders and those on both sides of the political aisle have come together to condemn the attack, mourn the precious lives that were unjustly ended, and seek to create a world in which this kind of unspeakable tragedy isn’t able to happen.

While numerous commentators have also seized on the event to advance the gay political agenda and target Christians who oppose that agenda, perhaps the most curious reactions to the attack have come from several Catholic bishops.

These bishops have used this terrorist attack to decry “anti-gay prejudice” within the Catholic Church and, and one even claimed that Catholicism “breeds contempt” for those with same-sex attractions and gender confusion.

“Sadly it is religion, including our own, which targets, mostly verbally, and also often breeds contempt for gays, lesbians and transgender people,” Bishop Lynch wrote.  “Attacks today on LGBT men and women often plant the seed of contempt, then hatred, which can ultimately lead to violence.”

San Diego Bishop Robert McElroy said that the Orlando tragedy “is a call for us as Catholics to combat ever more vigorously the anti-gay prejudice which exists in our Catholic community and in our country.”

Anti-gay prejudice?  Many orthodox Catholics who read that statement will no doubt wonder to what exactly Bishop McElroy is referring.

Anyone remotely familiar with the direction of the Catholic Church over the past fifty years knows that media caricatures of the Church as obsessed with sex or “anti-gay” are usually quite laughable and inaccurate.

Nearly an entire generation of priests—most of whom attended seminary during the 1970s—rarely, if ever, preaches about marriage and sexuality.  And often when they do, it’s to minimize, muddy, or even distort the very faith they are supposed to believe, live, and profess.

Catholics in the Western world are so poorly catechized that most of us dissent from or don’t understand fundamental Church teachings on human sexuality.  Go to any rank-and-file parish in the United States or Canada, and a person who comes out as “gay” is likely to be met with congratulations and a self-loathing apology for the Church’s “outdated” teaching.

The sad reality of it is, there is anti-gay bias within the Catholic community—and it comes from heterodox clerics who don’t uphold the Church’s compassionate, loving teaching on sexual morality.

Bishops and prelates like Bishop McElroy, who don’t speak about the harmful spiritual, physical, and emotional effects of sexual sin and seemingly condone it through ambiguous statements about supporting the “LGBT community,” are putting souls at risk.

The “anti-gay” bias in the Church comes from groups that encourage Catholics and others to engage in harmful behaviors that many who have “been there, done that” will tell you are anything but fulfilling.

The real champions of the “LGBT community” are the faithful parish priests who quietly help people accept their true identity as valuable sons and daughters of Christ—not the clerics who loudly condemn their own religion yet do very little to guide their flock toward eternal happiness.