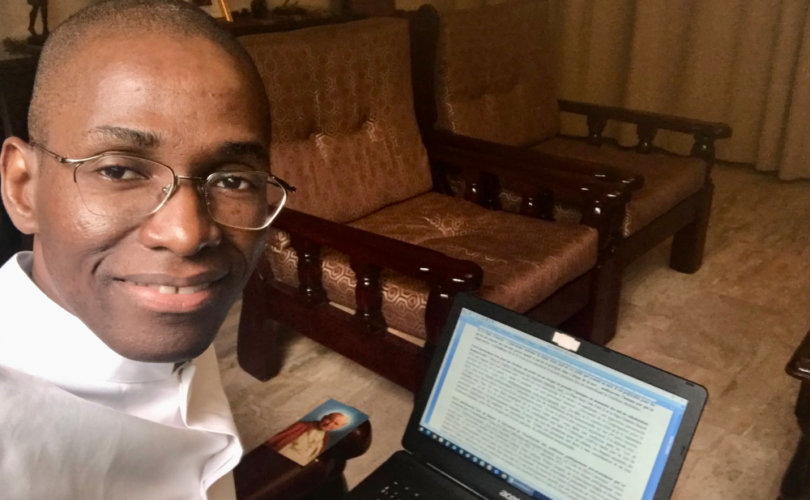 Editor’s note: The following is the response of a Catholic priest from the Ivory Coast written to Pope Francis, following the confirmation of sanctions imposed upon him for writing to the Pope about the pontiff’s “heresies.” The priest writes under the name Father Jesusmary Missigbètò: his first open letter can be read here, with the second here, the third here, and the fourth here.

(LifeSiteNews) – To the Reigning Pontiff Pope Francis, I have just received the Decree of the Congregation for Bishops, signed by you and Cardinal Marc Ouellet, in which you validate the sanctions imposed on me by the Prelature of Opus Dei because, according to the Decree, I lacked “respect and obedience to the Supreme Pontiff” (Code of Canon Law 273). In short, I am forbidden to preach, confess and celebrate Mass in public.

I take note of your decision, which I do not approve of because it is unjust. Moreover, I cannot, in conscience, renounce my public criticism of Pope Francis because, since 2016, you yourself have seriously lacked “respect and obedience to God and the People of God.” Indeed, before being pope and bishop, you are a priest and, according to the Code of Canon Law, “in leading their lives, clerics are bound in a special way to pursue holiness since, having been consecrated to God by a new title in the reception of orders, they are dispensers of the mysteries of God in the service of His people” (276).

Furthermore, as bishop and pope, you are concerned by the following canons: “an apostate from the faith, a heretic, or a schismatic incurs a latae sententiae excommunication” (1364); “a person who in a public show or speech, in published writing, or in other uses of the instruments of social communication utters blasphemy, gravely injures good morals, expresses insults, or excites hatred or contempt against religion or the Church is to be punished with a just penalty” (1369).

O Father, let me tell you that you have failed in your duty of priestly, episcopal and papal sanctity; and that you have propagated heresies and gravely injured good morals. And in your case, more than for a simple priest or bishop, this is even very serious, for the good example of a pope can do much good, while his bad example can do great harm.

Please remember the following words of Jesus Christ, Our Lord and Master, True Judge of all men and even of Pope Francis: “Much will be required of the person entrusted with much, and still more will be demanded of the person entrusted with more” (Luke 12:48); “Whoever causes one of these little ones who believe in me to fall, it would be better for him if a great millstone were tied around his neck and he were cast into the abyss of the sea… woe to the man through whom the fall comes!”(Matthew 18:6-7). But you have scandalised the whole world several times by contradicting Christian Tradition. Let me now give you the proof…

Is it morally right for a Christian, a priest or a bishop to take the initiative to ask for homosexual coexistence laws?

God and the Catholic Church have always said ‘no.’ Pope St. John Paul II and Pope Emeritus Benedict XVI have reminded us that every Christian has a “duty to witness to the truth” and to show “absolute personal opposition to such laws”, otherwise he commits “a gravely immoral” act (Document of the Congregation for the Doctrine of the Faith; June 3, 2003). Unfortunately, you have answered ‘yes.’ Indeed, on October 21, 2020 and September 15, 2021, you publicly called for the adoption of homosexual civil coexistence laws (cf. my 1st open letter): “What we have to do is a civil coexistence law; they have the right to be covered legally. I defended this.” Let me point out to you, Father, where your error lies: you are confusing “coexistence laws” with “protection laws.” Coexistence laws are related to LGBTQ ideology while protection laws are related to human discrimination. There are protection laws for children, pregnant women, people with disabilities, migrants, prisoners, etc. All of these people are entitled to humane consideration and treatment, but they do not require special homosexual coexistence laws.

Is it morally right to give the Sacrament of the Eucharist to publicly pro-abortion politicians who do not renounce abortion?

God and the Catholic Church have always answered ‘no’ (cf. Code of Canon Law 915-916). Unfortunately, you have answered ‘yes.’ Indeed, on September 15, 2021, you publicly agreed, with the incredible support of Cardinals Ladaria, Peter Turkson, Wilton Gregory, Archbishops Paglia and Michael Jackels, etc. (cf. my 4th open letter). On June 29, 2022, certainly consciously and premeditatedly, you allowed Nancy Pelosi, publicly known for her support of abortion, to receive the Holy Eucharist in the Vatican, during a Mass celebrated by you, and knowing full well that this was publicly forbidden to her by her bishop-resident. Thus, you lead the Catholic Church to disrespect its own laws given in the Code of Canon Law and you disrespect God and the Catholic People.

Is it morally right to perform a hysterectomy (removal of the uterus) with the agreement of medical experts but without a medical emergency for the mother’s health?

Is it morally right to say that “the commitment to live in continence can be proposed” to Christians and is “an option”?

God and the Catholic Church have always answered ‘no’. All Catholics with a minimum of orthodox Christian formation (and even non-Christians who strive to live the natural moral law) know that chastity is never an option but a serious moral duty for every human being (cf. Catechism of the Catholic Church 2331-2400). Unfortunately, you have answered ‘yes’. Indeed, on September 5, 2016, you and the bishops of the Pastoral Region of Buenos Aires stated that “the commitment to live in continence can be proposed.

Amoris laetitia does not ignore the difficulties of this option… the mentioned option may not, in fact, be feasible” Furthermore, on June 5, 2017, you ordered that these three sentences be published as “Magisterium authenticum” (Acta Apostolicae Sedis 108; pp. 1071-1074). In 2,000 years of Catholic history, this is the first papal doctrinal-moral error thus recorded in the Vatican Archives (cf. my 2nd open letter), with the astonishing support of several cardinals, bishops and priests: Parolin, Kasper, Schönborn, Coccopalmerio, Vallini, Cupich, Grech, Paglia, Forte, Scicluna, Fenoy, McElroy, Spadaro, Bordeyne, etc.

My sanction this morning makes it clear that you, and Bishop Fernando Ocáriz, and Cardinal Marc Ouellet, still retain a capacity for moral judgment. Why, then, your guilty and scandalous silences in the face of cardinals who gravely lack “respect and obedience to God and the People of God”? Cardinal Hollerich, S.J. (who has said publicly that “the Church’s teaching that homosexuality is sin is false”), Cardinal Marx (who has said publicly that “homosexuality is not a sin”), Cardinal Matteo Maria Zuppi (who allowed Father Gabriele Davalli to bless a homosexual couple at a Mass on June 11, 2022), Cardinal Blase Cupich (who allowed Father Joe Roccasalva to permit a homosexual couple to give the homily at a Mass on June 19, 2022, Father’s Day), etc.

What sanction for these unfaithful cardinals to the traditional teaching of the Catholic Church? None. On the contrary, positions of responsibility and public praise come from Pope Francis while priests faithful to Christian Tradition are sanctioned. O Father, what is this unjust justice of Pope Francis and the Vatican? Are you sure that God can accept such injustice? Why today this wind of dictatorship in the Catholic Church against those who prefer to obey the absolute divine law instead of following your flagrant disobedience to this eternal divine law? With all this, do you really think you deserve the respect of Christians, when you lead them to offend God and despise His eternal law?

Finally, the condemnation I received in this morning’s Decree is unjust because it does not take into account the following words of Jesus Christ (which, I say with respect, it would be good for you and Bishop Ocáriz and Cardinal Ouellet to meditate on calmly): “Why do you notice the splinter in your brother’s eye, but do not perceive the wooden beam in your own eye? How can you say to your brother, ‘Let me remove that splinter from your eye,’ while the wooden beam is in your eye? You hypocrite, remove the wooden beam from your eye first; then you will see clearly to remove the splinter from your brother’s eye.” (Matthew 7:3-5) What are my errors (splinter) compared to the errors of Pope Francis (wooden beam)? I hope that Catholic intellectuals will have the courage to defend this truth, for love of Jesus and his Church.

What is the greatest crime of the African priest now sanctioned? To have had the audacity to contradict in public Pope Francis and his Congregation for the Doctrine of the Faith. However, didn’t Jesus (30 years old) do the same with the religious leaders of his time (60, 70, 80 years old) because he was the one in the truth? Unfortunately, they handed him over to be crucified. Yet, it was from this sacrifice that God derived his victory: the light of Truth shone on the darkness of error and lies. Dearest Father, I take refuge in the open side of Jesus Crucified and in the tears of the Virgin Mary at the foot of the Cross…

Your son in Jesus, Mary and Joseph,
Father Jesusmary Missigbètò