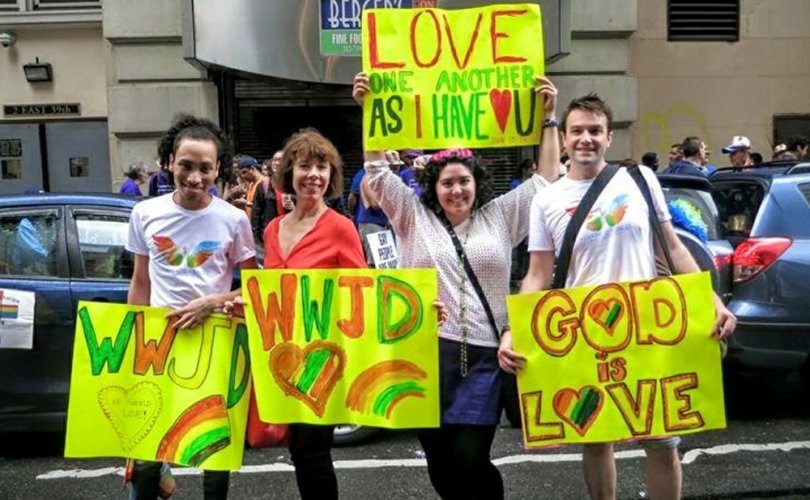 May 22, 2018 (Joseph Sciambra) – In the 1990s, I attended a gay wedding ceremony at a Catholic Church in San Francisco – performed by a Catholic priest. Friends and acquaintances had similar marriage “blessings” in San Francisco. As of a few years ago, when I spoke with another priest involved in these ceremonies, this practice continued.

When I left the Castro in 1999, I thought my experiences with facilitating and lecherous priests were endemic to a relatively small section of the world ranging from the Castro to USF. Ten years later, when I started writing about the topic, I heard stories from Catholics (primarily mothers with “gay” sons) who lived in every part of the U.S. They told a similar tragic tale – how a concerned parent sent a confused kid to an officially sanctioned LGBT ministry in his diocese, and the boy later emerged as a gay rights advocate. They also usually picked up a boyfriend at these ministries.

When I began my outreach in San Francisco to the LGBT community, and tried to have an honest discussion with someone about what the Church teaches, I heard the same thing over and over again: that is not what they teach at the local parish.

Before I started this outreach, I thought my struggle would be with the secular gay community. No, that has not been the battlefront. There is a gay civil war in the Church. Those who stand up for truth are few and ill equipped; we have almost no support from the hierarchy. While the gay-affirmative side controls entire parishes, LGBT ministers in almost every major archdiocese (CMLGP in L.A., Out at St. Paul in NYC, and AGLO in Chicago) determine who speaks at the largest gathering of Catholics in the U.S.: the LA REC.

Over the past ten years, because of this issue, I have teetered every day on the edge of leaving the Catholic Church. Beyond the physical and mental torments I have suffered due to a decade I spent as a gay man, the Church has been my greatest source of suffering.

It would be easy for me to leave the Church – then I would have peace. But I cannot abandon Christ as I once abandoned Him. He never left me.

I have a long history with this topic of homosexuality in the Roman Catholic Church. Within a few months of leaving San Francisco, a traditional community of priests took me in. I worked for them as a cook and house-cleaner. I thought they cared about me. Almost from the start, I witnessed strange goings-on in their house. I tried not to be suspicious, but I couldn't help it. I shared my concerns with one of the priests – he then manipulated me into believing that my past had clouded by judgment. I kept silent. Their interest in me seemed peculiar. Later, I noticed more public instances of grooming young men. I had to get out of there.

As a former sex abuse victim, I thought I was reliving the abuse. This almost destroyed me.

Back in California, when another priest encouraged me to contact the local ordinary where the religious order was located, I did just that. I wasn't treated well – like a liar. Horrible experience. This was just before the Boston scandal – and the diocese really did nothing. They denied it. A few years later, a boy sued the diocese. I got a subpoena to testify. In court, one of the lawyers revealed things about my past that only the priests knew through my confessions. Beautiful. The lawyer for the diocese sat there like a dunce. Never got an apology from anyone.

I have tried in all earnestness and charity to have a discussion with several bishops about the issue of gay-affirmative ministries within their dioceses. The universal reaction has been similar to what I experienced when I tried to report sex abuse: they throw up the shield, get a glazed look on their faces, and treat you like the enemy. There is no place in the Catholic Church for someone who won't be silent about the failure of the bishops to address this issue.

I take this very personally. In the 1990s, I had a wonderful and funny sad friend who always wavered on his alliance to being gay. I thought he was simply conflicted. The Catholic Church meant nothing to me. But it meant something to him. He struggled. Then he discovered John J. McNeill and a nearby gay-affirmative parish. Before that, I think he might have gotten out of the life. He didn't. He died of AIDS before the introduction of anti-retrovirals in 1994.

Words have meaning – and consequences. Those who carelessly utter them, are usually not the ones who suffer or die because of what they said. It's those who listened. I still find the Church complicit in my friend's death. It haunts me to this day.

At age 17, a Catholic priest told me God had created me this way.

When I crawled half-dead out of San Francisco, I never thought I would have this conversation with Catholics. When I went to the Castro in 1988, it was the height of the AIDS crisis, but I didn't care. I'd been alone my whole life, and I was willing to risk my life, if I could live like a human being for a few years rather than as a freak. I lived within a whole community of freaks – and they didn't judge me. By the early 1990s, everyone was dying – of AIDS, drug overdoses, and suicide. The Castro became a death camp without any visible barbed wire. But I wouldn't leave. I had nowhere to go. The local Catholic Church had a rainbow flag hanging outside the front door. I watched as friends dropped into the grave, but I didn't care – because I was alive.

Sometimes the greatest punishment endured by those who survive is surviving. I can't forget those I left behind. After seeing such carnage, I cannot understand why the gay experiment has not been abandoned like other failed utopian philosophies that resulted in mass murder – fascism, Nazism, communism. After over 300,000 gay men in the U.S. alone have died of AIDS, that the Church allows this debate to continue is reprehensible.

When I hear those in the Catholic Church say “you were born gay,” I think: My God, they are killing us.