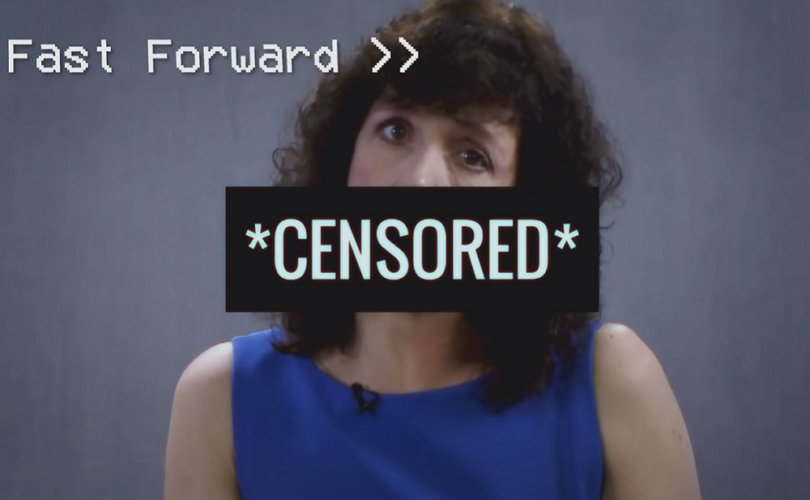 Those are the words of Dr. Michelle Cretella, a pediatrician with many years' experience and the executive director of the American Academy of Pediatricians, in a Daily Signal video published in 2017.

It's a sentence YouTube will not allow the doctor to say about children and gender identity issues.

The Daily Signal recently learned that our video of Cretella had been removed from YouTube. In its place, YouTube displayed this message: “This video has been removed for violating YouTube's policy on hate speech.”

Over the past few months, The Daily Signal worked with YouTube to try to reach a resolution. Ultimately, we were told the only way we could get the video back on YouTube was to delete the previously mentioned sentence.

In other words, we had two choices: censor the doctor's words or have no video on the world's biggest video platform.

This should horrify every YouTube user — and anyone who values the importance of a public square featuring a variety of perspectives.

Cretella's words are no doubt controversial. She is no stranger to criticism, and neither is The Daily Signal. We welcome debate.

But we don't want to be censored.

We agree with the spirit behind YouTube's hate speech policy, which states, “Hate speech is not allowed on YouTube. We remove content promoting violence or hatred against individuals or groups based on any of the following attributes,” including “Gender Identity and Expression” and “Sex/Gender.” We believe transgender individuals, and any individual struggling with gender identity issues, should be treated with love and respect.

But we also believe that on a topic where medical treatments have such serious ramifications, from infertility to permanent alteration of body parts, it is worth having a robust, fact-driven discussion.

Cretella is a doctor. She is making a point in that sentence that may not be popular but remains true: There is no society-wide push right now to allow patients suffering from Body Integrity Identity Disorder to amputate limbs.

Furthermore, just this May — 18 months since Cretella's video was published — the World Health Organization removed transgenderism from its list of “mental disorders,” moving it to a section about sexual health.

But as of July, Cretella's sentence — which did not even state transgenderism was a result of mental illness, but simply pointed out that our culture sees amputation of body parts differently depending on the body parts in question — is apparently so outrageous YouTube can't fathom allowing it on its platform.

We are especially disappointed with YouTube's decision because other social media platforms have allowed the video on their platforms. In fact, the video has more than 70 million views on Facebook. It might have even more if Facebook hadn't temporarily removed it in July 2018. After our appeal to Facebook, it was quickly restored and remains on The Daily Signal's page today.

Here at The Daily Signal, the multimedia news arm of The Heritage Foundation, we believe that private companies, including YouTube, should be allowed to set and enforce their own rules.

But we also believe consumers have a right to protest. And if you are upset that YouTube — the biggest video platform in the world — is refusing to let a doctor speak without censorship on gender identity and children, please reach out to YouTube and its parent company, Google.

Make it clear that while we may often be silent, many, many people want to have a free debate on controversial topics.

Join us in calling on YouTube to reverse this decision and allow this doctor to speak her mind freely on this vital issue.

This is not about how you think children experiencing gender identity issues should be treated, but whether you think there should be an open conversation on this topic, so that parents can make informed decisions about what's best for their child.

Censoring a medical doctor doesn't put YouTube on the right side of history. It just shows that it's a big tech company prioritizing the preferences of the activist left over free speech for all.