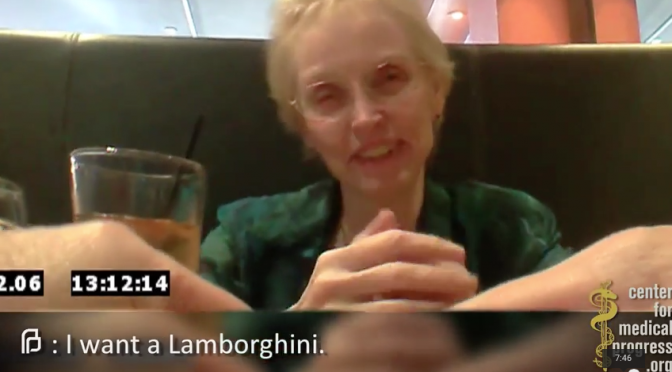 David Daleiden, the man behind the investigation, along with others, exposed the realities going on behind closed doors at Planned Parenthood abortion facilities across the country. Thanks to him and the CMP team, we’ve learned many things from watching the videos uncovering the truths of America’s largest abortion chain.

In the first video released, we learned that Planned Parenthood harvests the body parts of aborted babies.

Dr. Deborah Nucatola, Senior Director of Planned Parenthood Federation of America, was caught on tape saying, “A lot of people want intact hearts these days, they’re looking for specific nodes. AV nodes… yesterday I was like wow, I didn’t even know, good for them.”

“We’ve been very good at getting heart, lung, liver, because we know that, so I’m not gonna crush that part, I’m going to basically crush below, I’m gonna crush above, and I’m gonna see if I can get it all intact,” Nucatola said.

But the atrocities don’t stop there.

2. Planned Parenthood has a callous disregard for human life

One investigator posing as a buyer asked, “What would you expect for intact tissue? What sort of compensation?”

Gatter responded with, “Well why don’t you start by telling me what you’re used to paying…. You know in negotiations the person who throws out the figure first is at a loss, right?”

With plenty of haggling between the buyer and Gatter – prices being thrown out included $50 and $75 – the settled price ended up being $100.

“And are we agreed that $100 would keep you happy?” the buyer asked.

But the bargaining over prices of baby parts continued.

Gatter mentioned that it’s been awhile since she talked about compensation, and that she needed to see what other prices were out there. The total disrespect for human life didn’t end without Gatter jokingly saying she wanted an expensive ride with the compensation she was hoping to get.

“It’s been years since I talked about compensation, so let me just figure out what others are getting… if it’s still low then we can bump it up,” Gatter said. “I want a Lamborghini.”

3. Planned Parenthood appears to profit off of baby parts

Planned Parenthood profits off of abortions. But until the release of the CMP videos, it was unclear as to whether or not the corporation profited from selling baby parts.

In yet another disturbing undercover video, and probably one of the most horrific as far as content goes, we see a Planned Parenthood medical assistant casually pick through the body parts of an aborted baby.

“I think a per-item thing works a little better, just because we can see how much we can get out of it,” Ginde said.

In another video, Vanessa Russo, Compliance Program Administrator for Planned Parenthood Keystone, was caught on tape saying, “A company like this that wants to give our organization money for the tissue – I think that that’s a valid exchange, and that that’s okay.”

Later on in the same video, we hear from Deborah VanDerhei, National Director for the Consortium of Abortion Providers, discuss remuneration. According to the Center for Medical Progress, “VanDerhei refers to payments for fetal tissue as ‘donation for remuneration,’ which carries the connotation of financial reward or benefit without regard for actual expenses.”

“I have been talking to the executive director of the National Abortion Federation, we’re trying to figure this out as an industry, about how we’re going to manage remuneration, because the headlines would be a disaster,” VanDerhei said.

It is normal for Planned Parenthood providers to manipulate abortions in order to harvest specimens, according to officials caught on tape.

When Daleiden went undercover at the Texas Planned Parenthood, we learned that abortion procedures can be adjusted to harvest body parts, including liver-thymus and brain tissue.

“We bake that into our contract, and our protocol, that we follow this, so we deviate from our standard in order to do that,” said Melissa Farrell, Director of Research for Planned Parenthood Gulf Coast. “Some of our doctors in the past have projects and they’re collecting the specimens, so they do it in a way that they get the best specimens, so I know it can happen.”

5. The ultimate abuse on innocent life — abortion — is a significant part of Planned Parenthood’s business

Planned Parenthood makes money off of abortions. The abortion chain offers services like STD testing, contraception and pregnancy tests, but these distractions only mask what really goes on behind every single Planned Parenthood abortion facility in America, the killing of countless innocent lives every year.

America’s largest abortion chain has claimed that only 3 percent of its services are abortions. This is misleading, at best. Even the Washington Post – a paper that supports Planned Parenthood – has pointed out the flaws of the corporation’s 3 percent claim. The Washington Post Fact Checker said, “The 3 percent figure that Planned Parenthood uses is misleading, comparing abortion services to every other service that it provides.”

Planned Parenthood’s income from abortions is considerably higher than other abortion facilities. In an article published in 2015, the Washington Post said, “The main Planned Parenthood Web site says first-trimester abortions can cost up to $1,500. Some affiliate clinic Web sites provide a range of costs: a Western Pennsylvania clinic lists $390 to $1,090 for abortions.”

Live Action News reported last year that according to Planned Parenthood’s own numbers, at least 23 percent of the organization’s annual clinic income was solely from abortions.

Not only does abortion take away innocent life, but it takes away the right to life, the first among many for humans. This abuse has been going on since the ’70s with the passing of Roe v. Wade. But even with the genocide of millions of babies every year, Planned Parenthood continues to ignore the humanity of the preborn, and profit from their deaths.

Groups like the Center for Medical Progress have helped to expose the sad, but true realities of Planned Parenthood and the abortion industry. David Daleiden and his team have risked a lot in order to share the dehumanizing fact that Planned Parenthood harvests baby parts, which appears to be for profit.

According to the Select Investigative Panel on Infant Lives, the panel looking into the investigative videos exposing Planned Parenthood, its mission “is to gather information and get the facts about medical practices of abortion service providers and the business practices of the procurement organizations who sell baby body parts.”

If you or anyone you know has any information to help further the panel’s investigation into Planned Parenthood and the abortion industry, please visit this website.