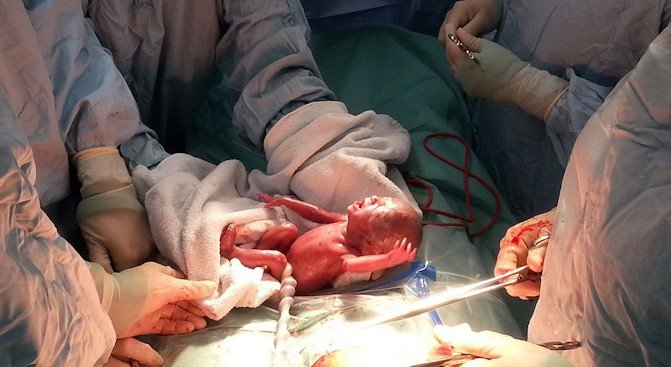 Images shape dialogue, and dialogue births change. Photographs that capture the Great Depression, the Holocaust, and the Civil Rights Movement are not only a testament of an era, but also examples of how photos are an effective tool for social change. The powerful images that fill the pages of history have initiated the struggle for justice and propelled the human spirit.

In September, 2014, U.K. mother Emily Caines released this gripping image of her premature daughter, Adelaide, who was delivered at 24 weeks. In an interview with The Mirror, Caines said she shared the photo of her daughter with the public as a testament to the humanity of the preborn child, and to show the hypocrisy of an abortion law in the United Kingdom that allows babies to be slaughtered at up to 24 weeks’ gestation.

“Our picture shows Adelaide was not a feotus, she was a fully formed human being,” Caines told the Mirror. “To think that a baby like her could be legally terminated on grounds of a lifestyle choice is to me is horrifying.”

The U.K. Mirror reported that this powerful image of little Adelaide is the only photo her parents have of her living outside of the womb, since Adelaide passed away shortly after birth due to complications.

Miscarried at 13 weeks and 4 days, baby Nathan Isaiah’s short life inside the womb affirms the humanity of the preborn at the earliest stages of life. Nathan’s parents, Allison and Daniel, learned they lost their son after they requested to hear Nathan’s heartbeat on the Doppler during the 15th week of pregnancy. When no heartbeat registered, the family visited the emergency room to obtain an ultrasound and learned that Nathan had passed away a few weeks prior.

“His little body was so perfect, with ten tiny fingers and ten tiny toes,” his mother said. “He had a nose, a mouth, two little eyes and ears.”

While the family grieved Nathan’s loss, they also shared the value of each human life through Nathan’s story.

Gruesome details from Philadelphia abortionist Kermit Gosnell’s “House of Horrors” revealed that the abortionist killed children born alive as a result of failed abortions, and brutally stabbed the necks of some with scissors. As images and testimony emerged, the world learned in shock.

One such child named Baby Boy B was discovered during a raid of Gosnell’s abortion facility, frozen in a red biohazard bag among 46 other aborted children. The medical examiner told the grand jury that at roughly 28 weeks, Baby Boy B’s spinal cord had been severed, and his neck bore the familiar scissor wound inflicted by Gosnell. Images depicting Gosnell’s inhumane and barbaric killings of these children underline the violent nature of late-term abortions.

Images of aborted babies are historically powerful tools in affirming the humanity of preborn children and the atrocity of abortion. This image of the arms and feet of a nine-week-old baby placed on a quarter displays perfectly formed fingers and toes.

Since most abortions occur during the first trimester, these images make it impossible to ignore the humanity of a child, even in the earliest stages of life. Fetal imagery exposes the graphic nature of abortion and the violence it inflicts on a preborn child.

Dubbed the “Hand of Hope,” this incredible image of baby Samuel Armas grasping a surgeon’s finger was captured by photographer Michael Clancy. Doctors operated on baby Samuel in utero after he was diagnosed with spina bifida. Clancy noted that before he captured the iconic image, he was “indifferent” to the issue of abortion. “It’s just a miracle picture, a miracle moment,” Clancy told Fox News in an interview years later. “It shows the earliest human interaction ever recorded.”

Armas’s mother, interviewed 10 years after the iconic image was taken, told Fox News: “Samuel identifies it more in terms of a pro-life message more than anything.” She said, “This photo happened and God used it to show people that this baby in mom’s tummy is alive. He’s pleased that his photo conveyed that message.”

In 2012, a heartbreaking image of a baby killed in China shed light on China’s grievous one-child policy. The image of a baby at nine months’ gestation shows the dead child submerged in a bucket of water. The photograph was reportedly posted to the Chinese web services company Baidu before it sparked outrage across Chinese social media sites. English reports note that the pregnant mother was forced into labor and the child was left in the bucket of water to drown after birth. Women’s Rights Without Frontiers Founder Reggie Littlejohn told LifeSite that children are violently killed in late-term abortions across China.

“Forced abortion is China’s war against women,” Littlejohn said. “It is official government rape. Late term babies are injected with poison in their skulls or drowned in buckets.”

Other images of forced abortions in China have also sparked outrage.

In summer of 2013, Lexi Fretz was 19 weeks pregnant with her son. Nothing seemed out of the ordinary until Fretz saw that the mild spotting she noticed a few days prior had turned unusually pink. Concerned, Fretz checked herself into an emergency room, and later that evening, she unexpectedly went into labor. Her 19-week-old son, Walter, did not live long outside of the womb, and died just minutes after birth.

“I held him, cuddled him, while his heart was beating I held him to my heart,” Fretz recalled. “I counted his toes and kissed his tiny head. I will always cherish those memories that I have of him. He was fully formed and everything was there, I could see his heart beating in his tiny chest.”

These moving images of Walter taken by Fretz’s husband have impacted thousands.

This article reprinted with permission from LiveActionNews.