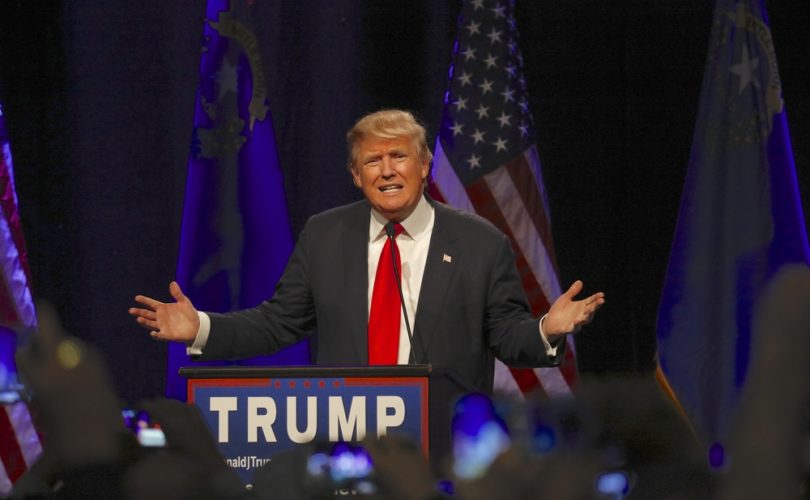 Donald Trump insists that he is pro-life...but how would he answer these? Joseph Sohm / Shutterstock.com

Feb. 8, 2016 (LiveActionNews) — Donald Trump insists that he is pro-life. However, like many in the pro-life movement, I am skeptical of both Trump’s understanding of and commitment to the pro-life cause. Here are seven questions I would like to ask the GOP candidate to clear up all the confusion:

1) While discussing ISIS, you argued that America must “take out their families.” How is the deliberate assassination of children compatible with the high regard for human life which is the hallmark of the pro-life movement?

2) In a 2015 interview, you were asked if abortion was murder. You replied, “It depends when, it depends when.” In your opinion, at what point in a pregnancy does the human fetus acquire human rights?

3) In the past, you have bragged about your affairs with married women and made derogatory comments towards women which are, frankly, unfit to repeat. How is this attitude compatible with the pro-life concern for the dignity and well-being of women?

4) You recently stated that your sister, who argued against the partial-birth abortion ban, would make “one of the best” Supreme Court justices. Did you mean that?

5) Since your conversion to the pro-life cause, how much money have you donated to abortion supporting candidates?

6) You explained that you became pro-life after a couple you knew decided not to abort, and “the baby turned out to be a superstar.” On the anniversary of Roe v. Wade, you lamented the loss of the children who “never had the chance to enrich the culture of this nation.” Do you consider the abortion of a future “superstar” who will “enrich the culture” to be as tragic and unjust as the abortion of a child with Down syndrome?

7) While you expressed disgust over the grisly Planned Parenthood videos, you asserted that abortion is “actually a fairly small part of what they do.” You stated, “I’m sure they do some things … that are good for women,” and, “We have to look at the positive also.” If Planned Parenthood was caught on video slicing up toddlers and selling their pieces, would you still insist that we “look at the positive”?