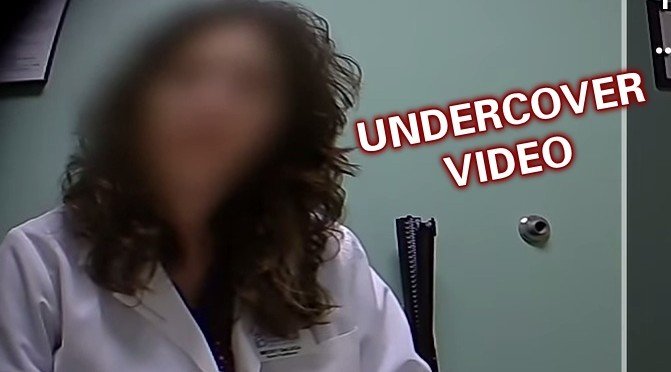 Planned Parenthood holds a long history of lawbreaking, manipulation, and cover-up. As America’s largest abortion chain, its crimes against humanity and profiteering is business as usual. Below are eight must-see investigative videos, documenting the horror that is Planned Parenthood.

Planned Parenthood was exposed for aiding and abetting child sex-traffickers, covering up the trafficking of minor girls while helping pimps obtain secret abortions. State law requires that Planned Parenthood staff report cases of suspected child sexual abuse which they failed to do repeatedly.

In one clinic, undercover tapes reveal how a Planned Parenthood manager helped a pimp and prostitute cover up their illegal child sex-trafficking ring, encouraging them to skirt the law by lying about the age of the girls involved. In the aftermath of Live Action’s investigation, the abortion giant fired the Planned Parenthood manager at the center of the controversy, but has denied involvement in this illegal activity.

What happens when a baby is born alive as a result of a botched abortion? According to Planned Parenthood, the outcome of that child’s life should be left to the mercy of the abortionist.

Planned Parenthood has a legacy of casually sweeping child sexual abuse under the rug, as documented in real life cases and through undercover investigations. Tapes recorded in Planned Parenthood clinics across the country reveal how abortion workers are not only complicit in the cover-up of statutory rape, but they offer instructions on how to circumvent parental consent and mandatory reporting laws.

Planned Parenthood’s repeated violation of rule of law gives perpetrators opportunity to obtain secret abortions for their underage victims, sending helpless girls back into the arms of their sexual abusers.

In a 2014 interview, Planned Parenthood CEO Cecile Richards admitted to a reporter that she believes life begins after birth. In sync with the ideology of the abortion corporation, Richards’ statement lines perfectly with the words of abortionist Leroy Carhart: “Life begins when the mother thinks it begins.”

Undercover cameras document how Planned Parenthood facilities across the country give mothers false medical misinformation pertaining to the life and development of their child. By dressing up abortion in euphemisms, the abortion giant cloaks the barbaric and inhuman practices occurring every day in abortion facilities.

Over 100 million girls are missing worldwide because they have been the victims of female gendercide, as reported by the United Nations. While countries around the world have banned this practice, Planned Parenthood, however, is willing to perpetuate discrimination against women by performing sex-selective abortions.

Undercover cameras documented Planned Parenthood’s willingness to target little girls for abortion. This acceptance of an unethical procedure adds insult to injury — all at the expense of the American taxpayer.

While Planned Parenthood claims to advocate for African Americans and minorities, an investigation into the abortion giant revealed its willingness to perpetuate racism. Clinics across the country eagerly accepted donations from an investigator who claimed racist motives were the reason for his wish to specifically fund the abortion of a black baby.

Adhering to the vision of its founder Margaret Sanger, a vocal eugenist, Planned Parenthood is fulfilling the vision that racism could only dream by the aborting of African American babies.

During an interview on national television, Planned Parenthood CEO Cecile Richards claimed that proposed budget cuts to the abortion giant would result in the moratorium of basic health care services, including mammograms.

Live Action’s probe into Planned Parenthood facilities across the country showed, however, that contrary to Richards’ statement, mammograms are not offered. Instead, investigators were told to visit local health centers for the service.

Although Planned Parenthood claims that women need its health care services, it has steadily increased its abortion numbers while whittling down other health programs.