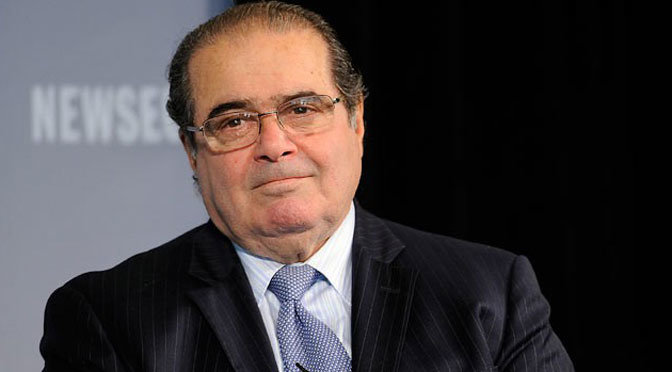 February 22, 2016 (LiveActionNews) — Within minutes of the announcement of conservative, pro-life Supreme Court Justice Antonin Scalia’s death earlier this month, abortion supporters took to Twitter to call for donations for abortion groups like NARAL and Planned Parenthood in Scalia’s name…

Thankfully, not everyone was so crass. Front-running GOP presidential candidates weighed in, with Senator Marco Rubio tweeting, “Justice Scalia will go down as one of the great Justices in the history of this republic.”

Donald Trump stated, “The totally unexpected loss of Supreme Court Justice Antonin Scalia is a massive setback for the Conservative movement and our COUNTRY!”

Senator Ted Cruz called for Scalia’s seat on the Supreme Court to be named by the next president, tweeting:

Scalia’s death comes on the heels of one of the country’s first major abortion case in 10 years, reports Politico:

The court next month will hear the most significant abortion case since 1992, when the justices ruled states could legally impose restrictions on abortion that did not put an “undue burden” on access to the procedure. This term’s abortion case, which centers on restrictions Texas placed on providers and clinics, will again test how far states can go to limit abortion.

The court is expected to be divided along familiar partisan lines, with Justice Anthony Kennedy serving as a possible swing vote. A 4-4 decision in the case, Whole Woman’s Health v. Cole, would leave in place a lower court ruling that upheld the restrictions on clinics.

After Scalia’s passing, Texas Governor Greg Abbott released a statement calling the late SCOTUS Justice a “unwavering defender of the written Constitution and the Rule of Law:”

Justice Antonin Scalia was a man of God, a patriot, and an unwavering defender of the written Constitution and the Rule of Law. He was the solid rock who turned away so many attempts to depart from and distort the Constitution. His fierce loyalty to the Constitution set an unmatched example, not just for judges and lawyers, but for all Americans. We mourn his passing, and we pray that his successor on the Supreme Court will take his place as a champion for the written Constitution and the Rule of Law. Cecilia and I extend our deepest condolences to his family, and we will keep them in our thoughts and prayers.

President Obama, who vowed to appoint a successor to the Court, ordered flags flown at half-staff in honor of Scalia.

Pro-lifers know that an Obama nominee would most likely tilt the Court in favor of abortion for years to come, and Senate Majority Leader Mitch McConnell has already stated that he intends to block any new SCOTUS nominee until the next President is in office.

Scalia was named to the high court in 1986 by then President Ronald Reagan and he took his seat September 26, 1986.