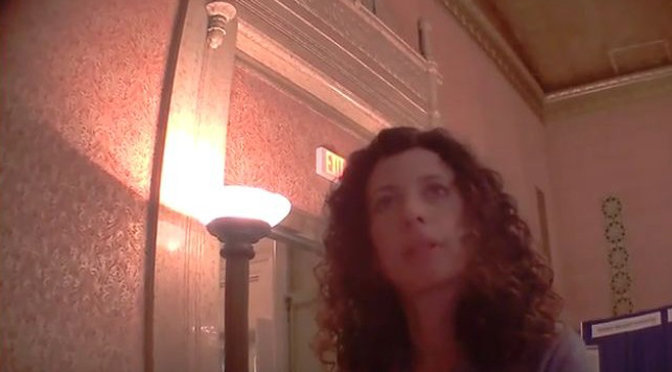 October 28, 2015 (LiveActionNews) — Leaked undercover video footage from the Center for Medical Progress, received this week by GotNews.com and put online by a hacker, shows an undercover CMP representative speaking with a Michigan Planned Parenthood abortion doctor about harvesting baby body parts for research. This abortionist, Lisa Harris, who once described doing a late-term abortion while pregnant, has admitted that abortion procedures are violent (and that abortion victims really do look like pro-lifers’ photos), and has said that re-assembling fetal body parts often elicits “feelings of awe” in abortionists.

“With my first pass of the forceps, I grasped an extremity and began to pull it down. I could see a small foot hanging from the teeth of my forceps. With a quick tug, I separated the leg. Precisely at that moment, I felt a kick – a fluttery 'thump, thump' in my own uterus.”

Harris is described by the pro-abortion blog RH Reality Check as a Assistant Professor in the Departments of Obstetrics and Gynecology and Women’s Studies at University of Michigan. Harris is also co-medical director of Planned Parenthood of Mid and South Michigan, and the Director of University of Michigan’s Fellowship in Family Planning. She is also a member of the board of directors for the Reproductive Health Technologies Partnership.

In a 2008 paper entitled, “Second Trimester Abortion Provision: Breaking the Silence and Changing the weeks Discourse,” Harris describes performing an abortion on a preborn baby at 18 weeks while she herself was 18 weeks pregnant. Harris writes:

I went about doing the procedure as usual. I used electrical suction to remove the amniotic fluid, picked up my forceps and began to remove the fetus in parts, as I always did. I felt lucky that this one was already in the breech position – it would make grasping small parts (legs and arms) a little easier….

With my first pass of the forceps, I grasped an extremity and began to pull it down. I could see a small foot hanging from the teeth of my forceps. With a quick tug, I separated the leg. Precisely at that moment, I felt a kick – a fluttery “thump, thump” in my own uterus. It was one of the first times I felt fetal movement. There was a leg and foot in my forceps, and a “thump, thump” in my abdomen.

In the same paper, Harris later writes about a 23 week abortion she performed and how she had to re-assemble the parts of the baby:

As a third-year resident I spent many days in our hospital abortion clinic. The last patient I saw one day was 23 weeks pregnant. I performed an uncomplicated D&E procedure. Dutifully, I went through the task of reassembling the fetal parts in the metal tray. It is an odd ritual that abortion providers perform – required as a clinical safety measure to ensure that nothing is left behind in the uterus to cause a complication – but it also permits us in an odd way to pay respect to the fetus (feelings of awe are not uncommon when looking at miniature fingers and fingernails, heart, intestines, kidneys, adrenal glands), even as we simultaneously have complete disregard for it.

After she dismembered this 23-week preborn baby, she “rushed upstairs to take overnight call on labour and delivery.”

Harris’s words conjure up pictures of a mad serial killer who can repeatedly kill without feelings of empathy for her victims. But in the leaked CMP video, you would get a completely different sense – the sense that Harris is a decent person who simply cares for the health of women. That is, if you didn’t listen to her own words about what Harris does to these children:

Harris tells the undercover CMP investigator that she performs abortion up to “19 and 6” meaning 19 weeks, 6 days. She also tells CMP that she has been involved in fetal tissue research in the past with, “independent / individual researchers” who needed either fetal tissue or organs.

Harris, who asked in her paper mentioned above, “What normal person does this kind of work?“ told CMP that all “research projects” at the Planned Parenthood affiliate she is with go through their VP of medical services. She also says that, “All research projects pay – pay for the effort but there’s never been like a per specimen fee.”

Harris appears distracted during the conversation but made it clear to CMP that she was most concerned about the “research regulations” that “get in the way.” She said her interest in using aborted children for research was that women be allowed to “feel good” about their abortions.

Despite this, Harris once admitted that there is violence in an abortion, even suggesting that the label of abortionists as “butchers” might be accurate:

There is violence in abortion, especially in second trimester procedures… Instead of acknowledging what is on the placards, abortion rights activists may say in response to them that they are fake pictures or that abortions don’t really look like that. However, to a doctor and clinic team involved in second trimester abortion, they very well may. Of course, acknowledging the violence of abortion risks admitting that the stereotypes that anti-abortion forces hold of us are true – that we are butchers, etc.

To date, the Center for Medical Progress’s videos have exposed the horrific body parts harvesting operation of several Planned Parenthood affiliates, prompting some members of Congress to question their $528 million in annual taxpayer funding.