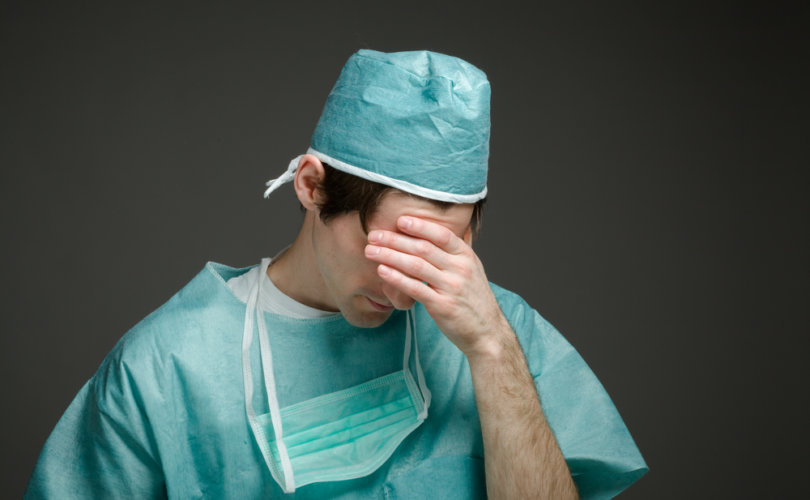 People have asked me why I became a doctor who performed abortions. If I’m honest, the original draw was the money. I didn’t have to take call. I didn’t have to work any emergencies. There were no overnights. I walked into the clinic, worked a few hours and walked out with a paycheck for several thousand dollars.

So begins the story of an abortion doctor who has recently quit his job. He contacted And Then There Were None, the ministry of Abby Johnson (herself a former director at Planned Parenthood) when he walked out of the industry. In an email, Johnson revealed the story of this doctor, which he told her he “really wanted to tell.”

The doctor explains that, even after he convinced himself that he was helping women, he “couldn’t figure out why I was ashamed of my work.” One day, he says, a family member who had invited him to church and who worked in the ministry took him to lunch.

One Sunday after church, this particular family member took me to lunch and confronted me about my work. I could tell it made them very uncomfortable, but I really admired their courage. And to be perfectly honest, I felt challenged. I realized during our talk that I had brought shame and embarrassment to my family. I had taken this job because the money enticed me. I wanted to be able to provide for my family with “things.” What I realized is that there were no amount of “things” I could buy that would make up for the shame I had caused them.

Then, he performed an abortion that changed his life forever and persuaded him to leave as soon as possible, even at a personal cost of $50,000.

Life changed for me during a 16-17 week abortion. I was performing a D&E procedure and had already pulled off both legs of this small human being. Every once in a while, you begin to pull out the fetus and the majority of the body will come out intact. I began to pull on the torso and the rest of the body came out whole. The arms, head, and torso were all still attached. I was moving the body to the tray for disposal and a slight movement caught my eye. I looked at this tiny chest and saw it moving up and down. Life was outside that woman’s womb, even just for a few seconds.

And there I was. I was holding this tiny body. An overwhelming remorse flooded my body. I had violently removed this child’s legs while she was still alive. I did that. She felt it. I was the last person to hold her alive, yet I was the person who ended her life. In that moment, I was thankful that she didn’t have the ability to open her eyes. I wouldn’t have wanted my face to be the first one she would have seen. Now I have hope that the first face she saw was the face of Jesus.

Former abortionist Dr. Anthony Levatino describes a D&E abortion in detail in the video below.

After this traumatic experience, the doctor talked with Abby (“I knew there was hope,” he says) and changed his job completely. On a personal level, he asks for prayers for his healing.

I have since left my job and am soon starting a new position at a facility that upholds the sacredness of human life. I have a long way to go. I still have a lot of things to work through, a lot of beliefs that are being challenged. I have a lifetime of healing to do, but knowing that I’m not doing it alone, that I have the support of Abby and her ministry is helping me put one foot in front of the other.

Thank you to everyone who supports this organization. I ask for your prayers during this time and thank you for helping me and people in similar situations find healing and hope.

To help abortion industry workers like this doctor, you can contact And Then There Were None. To those who are willing to reach out to abortionists and their staff with love, hope, and possibility for change, Abby writes, “you guys are seriously changing and saving lives every day.”