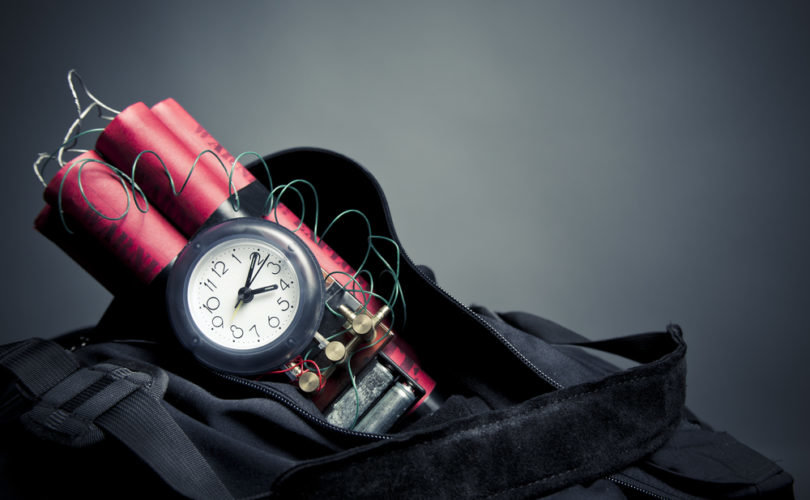 August 21, 2015 (LifeSiteNews) – Abortion lovers were clearly salivating when word got out that a man walked into George “Tiller The Killer's” former abortion facility with a bomb in his backpack earlier this week.

As usual, the “We-Sell-Out-The-Truth-To-Be-The-Abortion-Industry-Lapdog” MainStream Media instantly reported the guy was an evil, hateful pro-lifer who wanted to murder heroic, pure-as-the-driven-snow abortion providers. After all, that's the only thing pro-lifers really want to do: murder the innocent.

It turns out that, in fact, the guy was looking for a job, like so many Americans under Obamistake. He wanted to be a canvasser for Live Fetal Organ Dispensary Inc., otherwise known as Planned Parenthood.

The media-reported bomb was, in fact, a pill bottle-sized firework. No one was harmed, thank God, but the incident is just one of a too-long string of MSM bigotry against conservatives.

Unashamed by their exposed journalistic prejudice, the MSM brazenly still used the incident to try to associate the pro-life movement with anti-life violence. I guess Newsweek didn't want an inconvenient thing like the truth to stand in the way of peddling abortion propaganda. Joseph Goebbels would be proud.

Tiller was shot by a tragically misguided man in 2009, falsely thinking he was fighting abortion. Instead, not only was someone made in the image of God murdered — who now has no chance to repent — but the murderer gave fuel to the firestorm of hatred and false accusations against the truly peaceful pro-life movement. It isn't pro-lifers who are boasting about dismembering or burning to death over 56 million American babies (worldwide, the Planned Barrenhood-founded Guttmacher Institute proudly reports, “Over One Billion Sold!,” like a McDonald's sign).

It isn't pro-lifers who are keeping the truth from women by opposing informed consent laws, or fighting to make sure no pregnant mother sees her ultrasound (God forbid she should actually see who's in her body), or lobbying to stop one day waiting periods for major surgery, all under the guise of “empowering women.”

It isn't pro-lifers who viciously attack praying people kneeling on a sidewalk, threaten them with bodily harm, beat them up, threaten to kill them, point guns at them, throw Molotov cocktail bombs at them, slash their banners with hunting knives, rabidly rip apart their signs, shove them, scream curses at them, douse them with water, spit on them, vandalize their private homes and terrorize their children, and write on blogs that “The only good anti-abortionist is a dead anti-abortionist.”

It certainly isn't a pro-life President who officially categorizes pro-lifers as potential “Domestic Terrorists” in government documents. If the mainstream media were interested in the slightest in telling the truth, they would report how, in its greed, Planned Parenthood has become utterly obsessed with bloodlust.

I guess it's true: abortion violence begets violence. And the only way to fight the violence of pro-abortionists — and the violence of abortion — is by continuing to peacefully speak the truth in love.