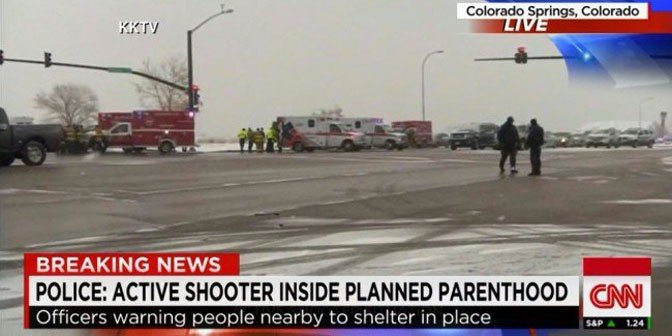 December 4, 2015 (LiveActionNews) — On August 15, 2012, Floyd Corkins entered the offices of the Family Research Council, a conservative Christian organization, with a gun and 15 Chick-fil-A sandwiches. Corkins was angry over FRC’s stance against same-sex marriage. As CNN reports, he intended “to kill as many people as he could at the research council and then smash the sandwiches in their faces.” Fortunately, Corkins only managed to shoot one man in the arm before being subdued.

In response to this event, 23 LGBT organizations released a joint statement condemning the violence…

We were saddened to hear news of the shooting this morning at the offices of the Family Research Council. Our hearts go out to the shooting victim, his family, and his co-workers.

The motivation and circumstances behind today’s tragedy are still unknown, but regardless of what emerges as the reason for this shooting, we utterly reject and condemn such violence. We wish for a swift and complete recovery for the victim of this terrible incident.

One of those who signed the statement was James Esseks, the Director of the ACLU Lesbian Gay Bisexual Transgender Project.

It seems clear, therefore, that the ACLU does not hold peaceful LGBT activists responsible for Corkins’ actions. Furthermore, it seems clear that the ACLU believes such tragedies should not be used to silence LGBT activists. While a madman with a gun may be influenced by current political debates, the ACLU understands that this fact should not be used to censor political debate.

In the wake of the Planned Parenthood shooting in Colorado Springs, the ACLU National Twitter account retweeted Planned Parenthood’s statement implying that pro-life activists were responsible for the violence:

We don’t yet know the full circumstances and motives behind this criminal action, and we don’t yet know if Planned Parenthood was in fact the target of this attack. We share the concerns of many Americans that extremists are creating a poisonous environment that feeds domestic terrorism in this country.

The “extremists” referred to are those of us who protest the brutal and inhumane activities which are committed in Planned Parenthood clinics. If the language we use seems extreme, it is only because the atrocities which we are describing are extreme. It is difficult to describe someone cutting open a baby’s face and taking out her brain without sounding a little “extreme.”

One is reminded here of the words of Martin Luther King Jr. in his Letter from a Birmingham Jail:

Pro-lifers are indeed “extremists,” but all of our extremism is directed against violence. Thus, the actions of the Planned Parenthood shooter were immediately and vigorously condemned by numerous pro-life organizations and leaders.

Would the ACLU (or Planned Parenthood) be comfortable blaming Corkins’ actions on the “poisonous environment” fueled by the LGBT “extremists” who accused the Family Research Council and Chick-fil-A of spreading hate? No. They would be quick to point out that the LGBT movement decries such violence and, furthermore, that the debates surrounding the treatment of LGBT people are important and necessary. Such debates should not be censored, and those who engage in such debates should not be demonized.

Those of us in the pro-life community simply ask for the same level-headed consideration.