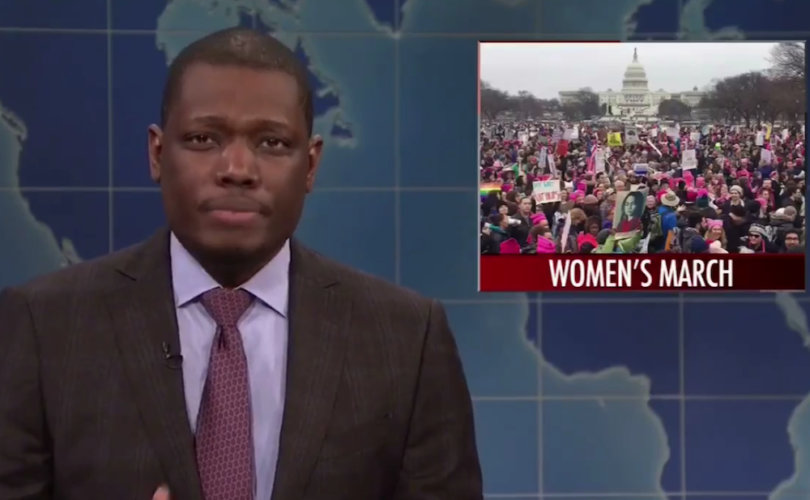 NEW YORK, New York, January 24, 2017 (LifeSiteNews) – The pro-life group “New Wave Feminists” made big waves in the media this past week – including becoming the unnamed subject of a skit on Saturday Night Live – after organizers of the Women's March on Washington D.C. rejected the group's bid to march on account of their pro-life stance.

“Some feminist groups were actually asked not to march because of their pro-life views,” SNL star Michael Che remarked in a segment about the March this past weekend (a surprising use of the term “pro-life,” given its source). “Which raises the question: What makes a feminist a feminist? It’s confusing.”

“A feminist is really just someone who believes in equal rights for women, and that’s easy to get behind,” Che concluded, before joking, “That is until you see an actual feminist screaming into a cop’s face wearing a homemade uterus hat, and you’re like, 'Oh, there are levels to this.'”

RELATED: I went into the middle of the pro-abortion women’s march – here’s what I saw

WARNING: Some crude language/subject matter in the video

“I just think it’s weird to get a special name for just being a reasonable person,” Che added, “cause that’s all it is.”

“Believing in equality just means you’re not a d**k,” he stated plainly. “And for me, that’s enough.”

New Wave Feminists had been granted partner status earlier this month for the anti-Trump protest and then later was rejected once march organizers learned the group is actually pro-life.

Other pro-life groups like Abby Johnson’s And Then There were None and Stanton Healthcare had also been granted partnership status at some point but also had it revoked.

New Wave Feminists and some other pro-lifers took part in the march on Saturday anyway without the partner designation.

Several other groups such as Life Matters Journal and Students for Life of America (SFLA) attempted to contact Women’s March on Washington organizers in hopes of being co-sponsor but did not receive a reply.

The march has taken some heat for its rejection of pro-life groups.

The feminist march began as a grassroots response for those upset by Donald Trump’s surprise win over Hillary Clinton, then morphed into a pro-abortion promotional event for Planned Parenthood and others.