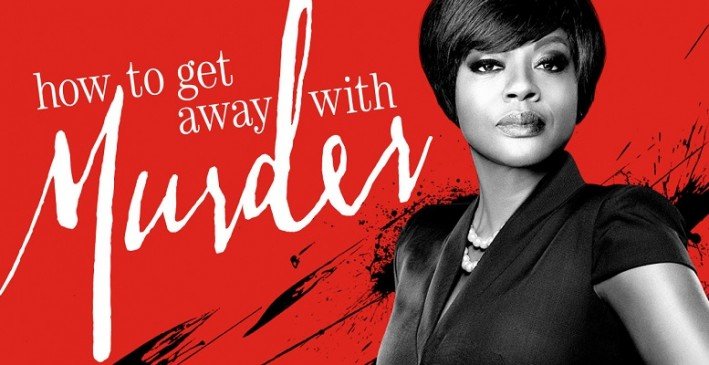 (Note: The following piece contains spoilers for How to Get Away With Murder.)

Warning: Keep your kids away from ABC on Thursday nights at 10. Shonda Rhimes has created yet another raunchfest of a show, this one a “legal procedural” show called How to Get Away With Murder.

I put “legal procedural” quotes because anyone who’s watched a single episode of Rhimes’ long-running nighttime soap opera Grey’s Anatomy knows the medical setting is mostly a backdrop for exploring the convoluted sex lives of a group of total neurotics who happen to be surgeons. The same appears to be the case with Murder, which focuses extensively on the numerous sexual entanglements between the show’s sprawling ensemble cast – with a special and unusually explicit focus on homosexual relations.

First, the basics: Just as Grey’s Anatomy started with a group of five attractive young first-year residents thrown into the deep end at a major teaching hospital, Murder follows a group of five attractive young law students selected by their professor to intern at her criminal defense firm – where she makes it quite clear they’re expected to check their morals at the door.

That might be problematic, were it not for the fact that none of these students seem to actually be carrying any moral baggage. (SPOILER ALERT: They’re all involved in covering up an actual murder, the details of which are unfolding in a parallel plotline set several months into the future; the show jumps back and forth between the present day and the night of said murder.)

I could try to list everything objectionable in this show, but it would take me thousands of words to do it. Suffice it to say, almost every character is a terrible human being. Avarice, lust, envy, jealousy, anger – these aren’t just deadly sins, they’re the fundamental character traits that define these fictional people. They lie, they cheat, they steal, they betray, and apparently, they even kill.

But all of that is beside the point when it comes to a show like this, because everyone knows the legal proceedings are just window dressing for the relationship stories. And that’s where things get even worse. Because as ruthless and evil as these people are in their professional lives, the way they act outside the office is even more reprehensible.

Almost every character who is married or in a serious relationship is actively cheating on that person with someone, or multiple someones. That’s par for the course in Shondaland, where sex is more common than a handshake, especially among coworkers. But this show is different from Grey’s Anatomy or Scandal in one significant way: It isn’t Rhimes’ show – it’s a creation of her protégé Pete Norwalk, an open homosexual who admits he wants to use Murder to promote and normalize gay sex on network television.

“I knew I wanted to push the envelope, especially with the gay sex,” Norwalk told E!. “And to me, writing the gay characterization and writing some real gay sex into a network show is to right the wrong of all of the straight sex that you see on TV. Because I didn't see that growing up, and I feel like the more people get used to two men kissing, the less weird it will be for people. I just feel like it's a lack of vision that you don't see it on TV, but ABC has never had a note about any of the weird stuff in the show, so I'm gonna keep it going.”

“We never got any pushback about [the sex scenes] from the network,” Norwalk added.

In nearly every episode shown so far, viewers have been treated to lengthy and explicit scenes featuring gay law student Connor Walsh and his sort-of boyfriend (promiscuous Walsh doesn’t “do” relationships, and only started sleeping with this man, an IT guy, to gain access to emails that could improve his standing with his boss) as they make out, strip each other down, and … well, I’ll leave the rest to your imagination, but the show definitely does not. Nor was much left to the imagination in a copy room scene between Walsh and another gay target of an investigation whom he uses sexually in order to get information that can absolve his boss’s client. (The target later commits suicide over Walsh’s betrayal.)

Just in case viewers close their eyes or take a bathroom break or fast forward through the sex scenes, the show writers make sure to pepper even the outside-the bedroom dialogue with plenty of references to what one character may or may not have done to someone else’s anus. “He did things to my…that brought tears to my eyes,” one of Walsh’s conquests tells someone over the phone.

Show creator Pete Norwalk told Variety that in writing Walsh as an “oversexed operator,” he hoped to desensitize viewers to gay sex.

“I’m a gay man, so I wanted to write a gay man character who is sort of a wish fulfillment for me,” Norwalk said. “I am in my 30s but he’s in his mid-twenties and I think that generation of gay men and women…they just have a different history, and I wanted to show someone who is just refreshingly confident and doesn’t have an issue with it and probably came from a background where people didn’t have an issue with it and it just feels more modern. I just want to show someone who’s awesomely gay.”

Norwalk also told the Television Critics Association, “I feel really lucky that I get to write someone who is a young man who is very sexually active and very confident, has no issues about his sexuality, and just feels like a very modern, free, inspirational character.”

I’m sorry, what? Modern, free, and inspirational? All evidence so far points to Connor Walsh being a lying, scheming, cheating accomplice to murder. But apparently in Norwalk’s world, that doesn’t matter as long as he’s comfortable with being gay.