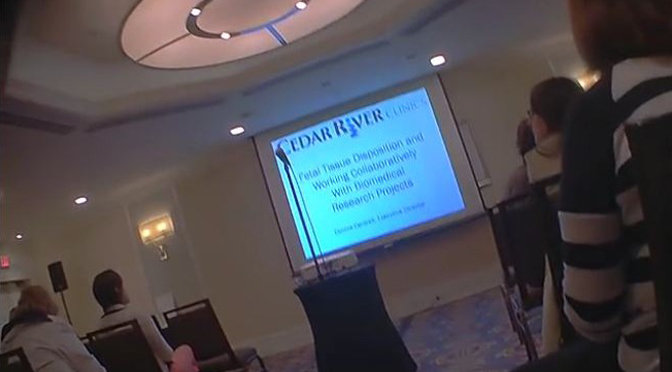 November 2, 2015 (LiveActionNews) — In a video secretly recorded at a National Abortion Federation Conference by the Center for Medical Progress and leaked to GotNews.com by a hacker last month, a representative from Washington State’s Cedar River abortion facility chain makes a presentation to the audience about their fetal tissue research program. The language she uses is eerily similar to the way Planned Parenthood officials described their ghoulish methods of procuring tissue from aborted children.

Although the staffer – identified only as “Connie” – does not specify which university they partner with for research, she does indicate that Cedar River abortion facilities collaborate with some of the same private medical research facilities as Planned Parenthood. Connie begins her presentation with National Abortion Federation (NAF) conference attendees by showing a slide which reads, “Fetal Tissue Disposition and Working Collaboratively With Biomedical Research Projects.”

Connie boasts that Cedar River is a “proud abortion provider” which was among the “pioneers of first and second trimester abortion” which operates “three clinical sites.” She says these facilities offer abortions “up to 26 weeks elective,” meaning that they will end the life of an unborn child in the third trimester, without restriction, for any reason. And judging from the fee scale below, those late-term abortions are big moneymakers (up to $7,000 for the procedure):

Connie expresses her pride in the fact that Cedar River pursues opportunities for research projects. Saying they are “fortunate” to practice in Washington State, Connie claims women are “empowered” if they can “make choices” that include “what happens to the fetal tissue after the abortion.” She then details what her state allows abortion clinics to do with the body of the dead child, including “burial, cremation, incineration and donation.” Connie adds that they contract with Stericycle for medical waste disposal.

She adds that Cedar River has counted the cost for getting involved in fetal tissue research – or as she calls it, “human subject research” – because Cedar River understands the “target they’d be placing on our backs” in beginning such a program:

Connie coldly describes the process of sending “tissue” to the lab, referring to shipping and processing – something we are used to hearing when we place orders online, not when we are talking about human beings. In the recording, Connie is heard telling her audience about the “work flow” program Cedar River has put in place, which includes enrollment eligibility, program overview and informed consent, as well as fetal tissue processing, handling and packaging.

She emphasized that women who enroll in the fetal tissue donation program are not compensated. But she also states that the university “rents” space from Cedar River, where they conduct their research and procure the body parts of the babies. In another dehumanizing reference to the children her clinic has aborted, Connie notes that clinical staff must be trained on how to handle “the specimen” after the abortion, including “packaging and labeling and storage of the specimen prior to courier pickup”:

Upon receipt of the tissue at the lab, the University staff actually performs a dissection of the fetus and placental tissue and then those components collected for research are forwarded onto their in-house projects and other academic research projects across the country.

It is almost hard to fathom this use of clinical terms in such a fashion with no remorse, as if the child is part of an automobile and not a once-living human being. As we learned from Planned Parenthood Medical Director Dr. Deborah Nucatola in the first video released by the Center for Medical Progress, fetal tissue donation is looked upon by the abortion industry as doing an “extra bit of good,” something that helps women to, in some way, feel better about having their children killed. Cedar River even offers women a place where they can memorialize their dead children (which the clinic just dismembered) before being shipped to a research lab.

As Connie puts it, if the tissue is not used for research it is “disposed of by cremation” and is then “buried at a group burial plot provided by the University.” And, she states, for a “minimal expense,” women can place a small plaque for memorial purposes at the burial site, something she said is an “appreciated option for many women who cannot afford private burial and cremation and would like to do so.”

Connie tells her audience that they have even collaborated with the same private fetal tissue procurement company that Planned Parenthood partnered with: StemExpress.

“We’re really fortunate to be able to work together with both of these, the University and StemExpress to make this happen,” she said.