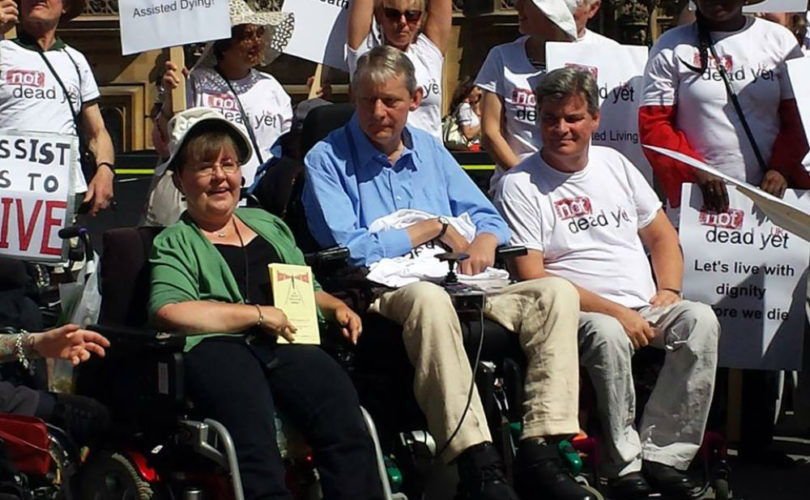 In an article published in the Daily Mail, it was reported that Baroness Jane Campbell who lives with spinal muscular atrophy told her peers that assisted suicide:

'offers no comfort to me – it frightens me.'

'I did not ask it and I do not want it, but it is about me nevertheless.'

Baroness Campbell spoke about the difficult times in her life. She told the House of Lords:

that in moments of despair, she might be tempted to ask for assisted dying – and if the law changed, doctors would not stop her.

'It frightens me because in periods of greatest difficulty I know I might be tempted to use it. It only adds to the burdens and challenges life holds for me.'

In response to the criticism that she would not qualify under this assisted suicide bill, Campbell stated:

'Before anyone disputes this, imagine that it is already law and that I ask for assistance to die.

'Do your Lordships think that I would be refused?

Baroness Tanni Grey-Thompson, refuted in her speech the comment that only 80 people die each year by assisted suicide in Oregon. Grey-Thompson, a paralympic star stated: You can be sure that there would be doctors and lawyers willing to support my right to die.'

Oregon has only 3 million people, if the same trend was replicated in the UK some 1,600 people a year could take their own lives in doctors’ surgeries or Dignitas-style clinics.

The Daily Mail article then reported on the speech by Lord Tebbit, whose wife Margaret was paralysed by an IRA bomb. Tebbit said that in moments of despair his wife has stated:

“I would be better dead so that you could get on with your life.”

“I have no children but I have several vultures awaiting my death.”

Last week, a Dutch ethicist, Dr Theo Boer wrote an article about how he has changed his mind concerning assisted suicide. Dr. Boer stated: This Bill will be a breeding ground for vultures, individual and corporate. It creates too much financial incentive for the taking of life.’

‘Once the genie is out of the bottle, it is not likely ever to go back in again.’