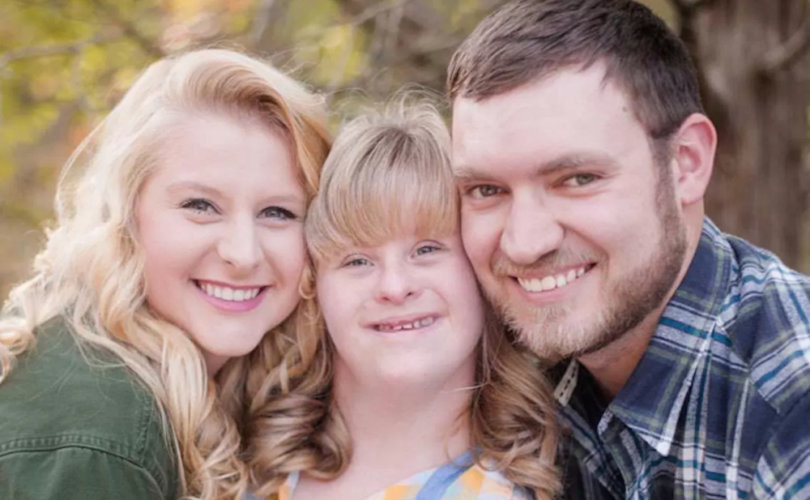 Ashley Schaus, sister Hannah and Will SeatonBret and Brandie Photography

July 7, 2017 (LifeSiteNews) — Will Seaton, 25, and Ashley Schaus, 23, had been sweethearts for several years. But when it came time to pop the big question, Will showed up with two rings — not just one — in his pocket. And his now-fiance got the second ring.

Will had known for many years that marrying Ashley was going to be a package deal. Ashley’s 15-year-old sister, Hannah, has Down syndrome, and Ashley had informed Will long ago that if he wanted to marry her he’d have to, in essence, “marry two girls” because Hannah would always be dependent on her.

Undeterred, Will rose to the challenge in the best possible way, declaring his love and commitment to both.

At an annual family photo shoot last year, Will got down on one knee and pulled out a ring and asked Hannah to be his “best friend forever.”

Ashley told TODAY that Will then “looked at me as I was trying to stop sobbing. I asked ‘Am I next?’ Then he got down on one knee and asked me to be his wife.”

The fact that Will surprised his bride- and sister-to-be at a photo shoot explains the many beautiful photographs capturing the event.

“I wanted to include Hannah in the proposal in case she may not get to experience that. Hannah is a big part of our relationship and I already consider her a sister,” Will said.

“I was very surprised,” Ashley told FOX59. “Will is wonderful, but he's rather humble and so this gesture blew me away. She was so happy, and all I could think about was how special this was for her.”

On their wedding day in October, Will plans to share “best friend vows” with Hannah, and at the reception, to dance with her to Harry Nilsson’s song “Best Friend.”

Hannah told ABC News that Will is “amazing” and said his decision to include her in the couple's special moment made her “very happy.” She said, “He takes me fishing and makes funny jokes. He makes me laugh and takes care of me.”

Will said, “Hannah reminds me that there's a lot in life to be thankful for and that we shouldn't take life for granted.”