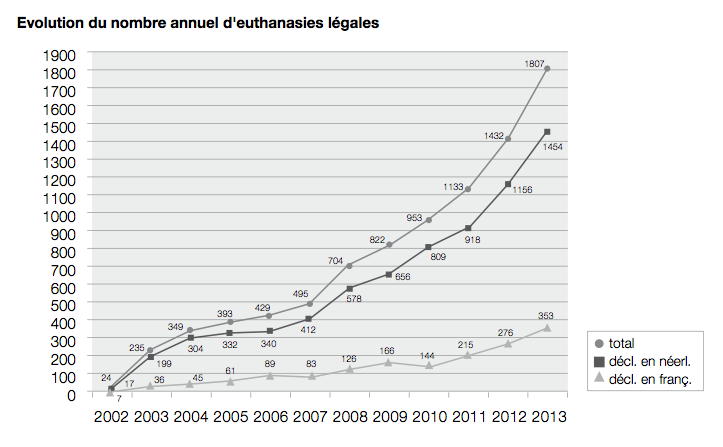 September 15, 2016 (AlexSchadenberg) — The Journal of the Canadian Medical Association (CMAJ) just published the most recent study concerning Belgian euthanasia data titled: Euthanasia in Belgium: trends in reported cases between 2003 and 2013.

The practice of euthanasia in Belgium has increased year by year since the introduction of legislation in 2002. An increase in cases often considered as more controversial, such as those involving neuropsychiatric conditions, has also occurred, although such cases remain a small minority.

One would assume that a “comprehensive” study, such as this one, would uncover new data and information. Sadly this study rehashes the same data by researchers who are known as the “official” Belgian euthanasia researchers.

This study lacks depth in research and analysis.

For instance, there were 1807 reported euthanasia deaths in 2013 in Belgium, and yet the study Recent Trends in Euthanasia and Other End-of-Life Practices in Belgium that was published in The New England Journal of Medicine (NEJM) (March 19, 2015) found that 4.6% of all deaths in the Flanders region of Belgium were by euthanasia and an additional 1.7% were assisted deaths without request.

The data provide insight into only those euthanasia cases that were reported. Previous research, conducted in 2007, showed that about half of all euthanasia cases in Belgium were reported to the committee and that unreported cases were generally dealt with less carefully than reported cases. In addition, this study was based on an analysis of secondary data collected as part of the mandatory notification procedure. Details about the patients’ clinical circumstances and the precise nature of the suffering that caused them to seek euthanasia were not recorded in the database.

“However, in a bivariate analysis there was a significant relation between reporting euthanasia and the patient's age, with deaths of patients aged 80 years or older reported significantly less often than deaths of younger patients.”

A study published in the CMAJ found that 32% of all assisted deaths in Belgium (2007) were done without explicit request. That study indicates that the assisted deaths without request are rarely reported and were more likely done to:

“patients 80 years or older who were mostly in a coma or had dementia.”

“this fits the description of “vulnerable patient groups at risk of life-ending without request.”

We need research that uncovers new information, not rehashing the same data.

We know that people requesting euthanasia are often depressed. We need studies examining these cases. We need to determine when or if euthanasia has become a form of abandonment of people at the most vulnerable time of their life.

We already know that there has been a continuously expanding number of deaths and reasons for euthanasia. We need to know how certain groups, such as people with dementia and other people who are incapable of requesting euthanasia are treated and we need to know if they have become vulnerable in a culture that believes that some lives are not worth living.

For a thorough examination of the data related to the assisted deaths without request and unreported euthanasia deaths in Belgium and the Netherlands purchase the book: Exposing Vulnerable People to Euthanasia and Assisted Suicide written by myself.