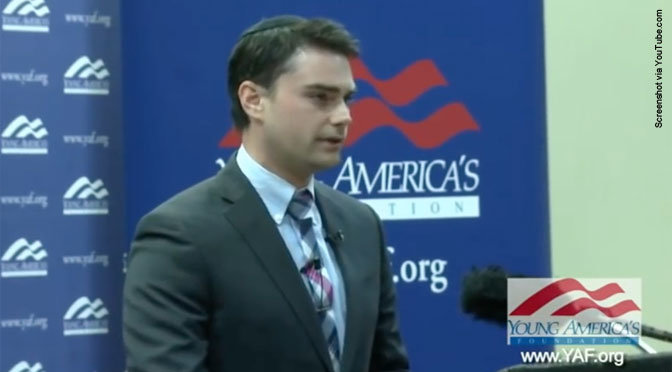 April 5, 2016 (LiveActionNews) — Conservative pundit and Daily Wire editor-in-chief Ben Shapiro has done yeoman’s work in exposing the illogic of pro-abortion doctrine, and his latest work is no different. During the question session following a recent speech at Salisbury University in Maryland, a number of pro-abortion college students finally got an opportunity to try out the talking points that have so impressed them against a real, live opponent… and it didn’t go so well for them:

The video is deeply satisfying to see pro-abortion ideologues’ ignorance finally catch up to their arrogance for once, but it’s also deeply disturbing. Most of us have from time to time seen web forum discussions in which people absolutely convinced of their moral and intellectual superiority display a scandalous lack of critical thinking skills and unfamiliarity with the most rudimentary facts of the issue, but at least they tend to have the caveat of “it’s the Internet,” hardly representative of our country’s true intellectual condition.

Here, though, we have college students—who are presumably in college to pursue “higher learning,” have achieved enough academically to get admitted in the first place, and are attending a campus political talk because they’re more engaged than others in the student body—who are every bit as uninformed and thoughtless as the average internet troll. Let’s take a look at some of the most damning examples.

STUDENT: It’s my body. How about you just stay out of it? [Crosstalk]

STUDENT: Why do you care so much about—

STUDENT: And I can take out my appendix if I don’t want it. So why can’t I take out other parts of my body?

SHAPIRO: Because they are not independent living human beings.

STUDENT: They’re not independent living human beings when they’re a bundle of cells.

To this, Shapiro asked, “at what point does that bundle of cells become a human being in your view?” After a tellingly-long pause, an “um,” another pause, some crosstalk, her explanation that “I just need to calm down for a second” before answering,” and another lengthy pause, she replied by… changing the subject to life-of-the-mother cases and late-term abortion.

Think about that: “what exactly is in the womb?” is the very first question any sane person should ask before figuring out what to think about abortion. It’s bad enough when pro-aborts try to change the subject or twist logic to pretend it’s not really a human life until birth, but to not have any answer ready? Has she never bothered to research it? How do you argue for or against anything without familiarizing yourself with the basics first?

At this point, another pro-abortion student stepped in to take over for her clearly-floundering classmate by invoking the famed “bodily autonomy” argument for abortion, which while still fallacious is at least an argument. But she too soon proved to be ill equipped for serious discussion.

To Shapiro’s point that “the baby is not part of your body” she incredibly claimed “yes it is” (the baby’s DNA being different from the mother’s shows otherwise). Then, after a nonsensical exchange about viability (which Shapiro swiftly debunked by pointing out that people in iron lungs are no more “viable” than a fetus who needs an umbilical cord), she preposterously said he “manipulat[ed] science to advance your own views” (after being unable to refute a single scientific claim he made) and even accused him of “shutting people down.” Shapiro asked how that could be when she had been talking for quite a while at that point, so “shutting people down” suddenly became “you haven’t actually answered our questions.”

The stupidity here is almost physically painful. The “no answers charge” is a self-evident lie, and “shutting people down” perfectly encapsulates the safe-space/triggering derangement sweeping the county’s colleges. Once, the purpose of higher education was to expose young people to new and challenging ideas, thereby broadening their preconceptions of the world and forcing them to deepen not just what but how they think. This was understood to be a key component of an arcane, outdated process known as “growing up.” But now a student’s prejudices (as long as they’re the right ones) are meant to be sheltered and coddled from anything that might disrupt his or her ego.

The result, as we see here, is that disagreeing with a pro-abortion advocate is now an infringement. Discussion itself is dangerous—even a discussion that the “victim” instigated.

Finally, a third student tried to corner Shapiro with an obligatory case of “trying too hard to be clever results in making a fool out of yourself”:

SHAPIRO: Well put. Well put, sir [audience laughter]. I believe, as do most people who feel this way about abortion, that life begins at conception. When sperm meets egg, when the child is conceived, that’s when life begins. That’s what I believe.

Sigh. This may not be the most consequential scientific fallacy pro-aborts use, but it’s definitely the one that makes me want to slam my head against the wall the most. Individual sperm cells and egg cells are not living human beings, and therefore not equivalent to zygotes or embryos, because they actually are parts of the parents’ bodies, not organisms. They don’t have their own DNA distinct from the man’s or woman’s, but preborn babies do. They have no inherent capacity to develop into anything else on their own, whereas the preborn from fertilization onward not only grow and develop, but display all the other characteristics of a living organism, such as metabolism and response to stimuli.

Pro-lifers are by no means perfect; we make weak arguments from time to time, and no movement has a monopoly on intelligence. But most pro-lifers on their worst day wouldn’t be caught dead knowing so little about either the issue itself or the other side’s arguments. This culture of willful ignorance—and worse, of feeling apparently no moral responsibility to really understand significant topics one is passing judgment on—among the pro-abortion youth of the incoming generation is another grim reminder of the work we’ve got out for us in changing the future’s hearts and minds.