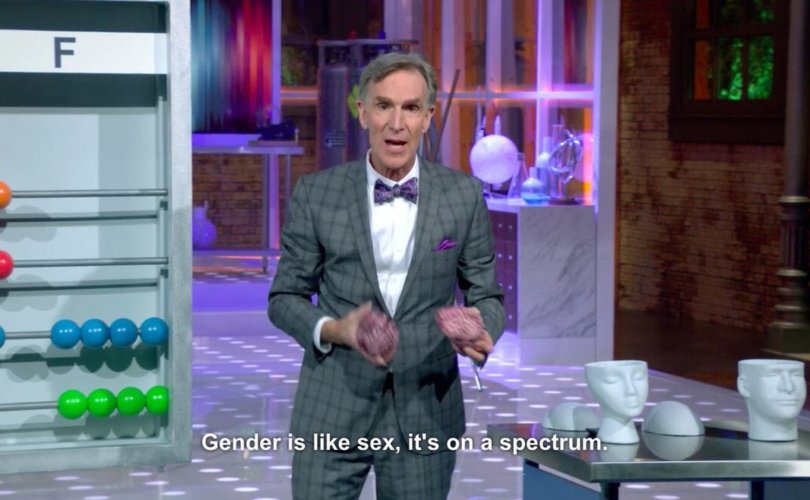 Most of the lyrics, in fact, are simply too vile to even mention.

Anyone who doubts whether Nye has completely jumped the shark can find ample evidence of that in this crude and creepy ode to the Sexual Revolution.

The song is part of episode nine of Nye's new show “Bill Nye Saves the World,” titled “The Sexual Spectrum.”

It begins, “This world of ours is full of choice / But must I choose between only John or Joyce?”

Bloom sings about how “If they’re alive I’ll date ’em” whether they're “Channing or Jenna Tatum.”

At one point during the musical number, a geeky guy joins Bloom on stage saying, “Oh, you think you’re so smart. Did you learn gay in college?”

She replies, “Sexuality’s a spectrum; everyone is on it…drag queen, drag king, just do what feels right.”

He apparently changes his mind, notes his preference for sexual encounters “with a sad clown” via webcam, and then joins Bloom in ripping off his pants and dancing.

The song exhorts listeners to perform a sex act on “someone new,” and “get off your soapbox.”

Bill Nye has kissed science goodbye. He's embracing gender ideology over biological reality. Will he retract any videos or statements he's made on how it takes a male and a female to reproduce? Or any videos about the binary nature of sex in the animal kingdom?

Science sure gets in the way of things sometimes!

The video is available here (Viewer be warned).