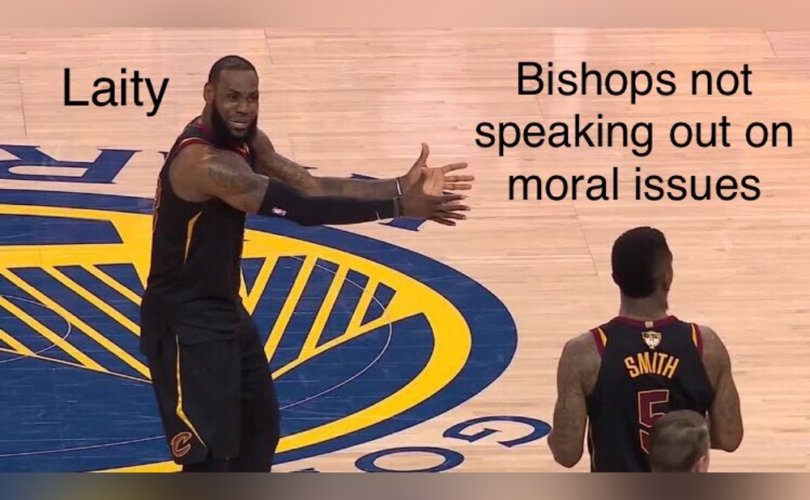 June 14, 2018 (LifeSiteNews) – An Australian bishop has created a meme making the rounds on social media that highlights the frustration faithful Catholics experience when their bishops fail to address pressing moral issues.

Bishop Richard Umbers, auxiliary bishop of Sydney, tweeted a meme earlier this month that shows just how closely he is keeping his finger on the pulse of faithful Catholics.

EWTN’s ChurchPOP explained the meaning behind the image and the words:

The picture comes from Game 1 of the NBA Finals between the Cleveland Cavaliers and the Golden State Warriors, when J.R. Smith (bottom right) seemingly misunderstood what was going on in the game and made a bad play, upsetting his teammate Lebron James (left). The image has been used thousands of times with different text. In this case, Bishop Umbers added “Laity” next to Lebron James and “Bishops not speaking out on moral issues” next to J.R. Smith.

In other words, he’s saying that the laity in the Church can often be upset that bishops are not more forcefully speaking out on moral issues, as though the bishops are missing the importance of what’s going on in the world.

Last fall, Bishop Umbers penned a piece for The Washington Post, titled, “I’m a Roman Catholic bishop. And I make memes for Jesus.” He wrote:

You might wonder why a successor to the Apostles, with all the gravitas that an office of 2,000 years standing brings with it, finds the time to make memes. It isn’t a ridiculous question, and it doesn’t have a ridiculous answer. On the one hand, memes are just a bit of fun, eye candy for the harassed and overburdened who scroll through their phones on the way to or from work, or as they drop off to sleep at night. But they can also carry important messages in ways that are accessible to millions.

In a world of flux and shifting opinions, it’s my hope that a well-timed meme can open eyes to eternal truths that, once grasped, will never leave minds and imaginations. After all, memes speak to people in a language they already know, in a way that they understand, in a place where they’re ready to listen – just like Jesus used parables.