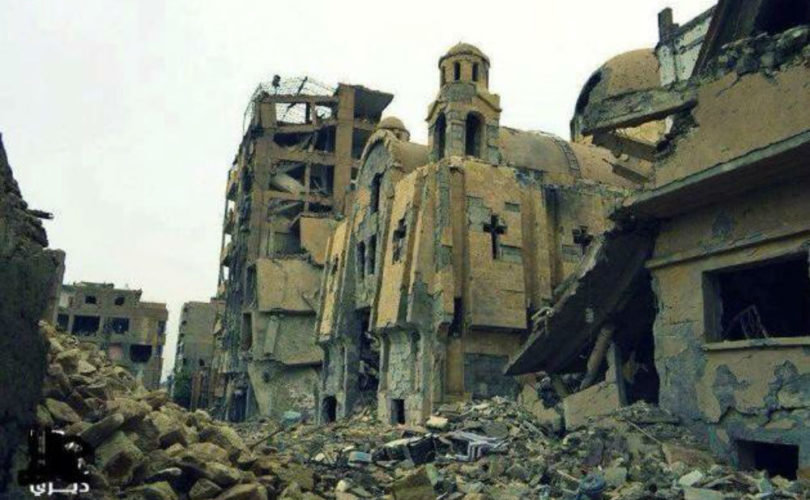 I'll be honest: I don't understand why soccer has so many fans. However, as my Facebook News Feed has been inundated with other people who seem to love the sport, I've accepted that I must suffer until Sunday evening before I get a four-year break. I've even watched a couple of hours to try and understand the game, only to return to mocking it on Facebook.

If only my friends and I — a microcosm of the American and developed world's population — spent a fraction of this time paying attention to some real battles going on, with real consequences for millions of Middle Eastern Christians.

From Rorate Caeli's blog, a wake-up from two bishops. First, in Syria and Iraq:

It was unclear whether Syrian troops, who apparently advanced in and around the northern city of Aleppo on Monday, July 7, would be able to halt the ISIL fighters. Yet, most Christians have already been forced to flee Syria and Iraq, where the head of the Chaldean-Catholic Church, Patriarch Louis Raphael I Sako, fears Christian life will eventually come to an end in the region.
“In ten years there will perhaps be 50,000 Christians left” in Iraq, he said in a statement released by Catholic charity Aid to the Church in Need and obtained by BosNewsLife. “Prior to 2003, this figure was about 1.2 million. Within ten years we have shrunk to a community of perhaps four to five hundred thousand faithful,” he added.

The bishop begged for attention from Western states who he said “find football” in the current World Cup “more interesting than the situation here or in Syria.”

And now Cardinal Barbarin, the Primate of the Gauls:

“The eradication of religious minorities is not, alas, a collateral damage of the insane strategy of the murderers: it is their declared goal,” says Cardinal Barbarin. And he adds, “Because these are men who are being murdered, in silence, between two waves of a Brazilian soccer stadium,” he insists by evoking the global enthusiasm for the football world cup.

Are there tangible, real benefits to the World Cup besides the occasional scoring of goals? Absolutely. It's what the entire concept of the Olympics is based around. But as American Christians continue to be sucked into a shallow world of sports, celebrity scandals, and political memes, we ignore where critical battles for peace and justice exist — in the Middle East, and other regions of the world, where, to quote the Boston Globe's John Allen, “Christians…find themselves in a literal firing line.”

Recently, my parish had a collection to help provide funds to Middle Eastern Christians. I'm ashamed that, despite being a professional reporter, blogger, and general politico, I knew so little about the situation that I shrugged off the chance to offer some financial assistance to Christians who are modern martyrs for the faith.

If only I was alone in my ignorance. Alas, I'm not — and while Facebook memes about popes and soccer abound, the Middle East crisis will continue to go unnoticed.