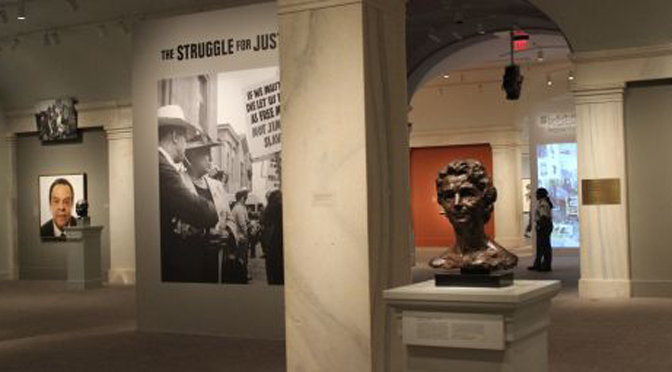 August 12, 2015 (LiveActionNews) — Abortion advocates revere Margaret Sanger, founder of Planned Parenthood, as some kind of hero. The reality, however, is much darker. Sanger was a racist who advocated for eugenics, and thought women should be banned from having babies.

It’s puzzling that so many leaders in the black community still support Planned Parenthood, given the racism of its founder and the organization’s continuing racist activities. Thankfully, there are some who are willing to speak up and refuse to let Margaret Sanger’s racist proclivities be forgotten. A group of black pastors has written to the Smithsonian Museum, asking that Sanger’s bust be removed from the “Struggle for Justice” exhibit.

“Perhaps the Gallery is unaware that Ms. Sanger supported black eugenics, a racist attitude toward black and other minority babies, an elitist attitude toward those she regarded as ‘the feeble minded;’ speaking at a rally of Ku Klux Klan women; and communications with Hitler sympathizers,” the letter from Ministers Taking a Stand states.

“Also the notorious ‘Negro Project,’ which sought to limit, if not eliminate black births, was her brainchild,” the letter states. “Despite these well- documented facts of history, her bust sits proudly in your gallery as a hero of justice.

“The obvious incongruity is staggering!” the letter states.

How Margaret Sanger should be honored as some sort of warrior for justice is impossible to comprehend. Sanger wanted to prevent “unfit” population groups from breeding. This included the disabled and the poor. But much of Sanger’s poison was directed toward the black community. In a letter describing her “Negro Project”, she spoke openly of her wish to exterminate the black population. That’s just one of many horrifying things for which Sanger advocated.

Margaret Sanger was a person who was in favor of forced sterilization, believed that large families should kill their infants, and wanted the government to put birth control in the drinking water of urban areas with large minority groups. There’s sadly much more to her eugenicist views.

How can someone who wanted to prevent the poor, the disabled, and the minorities from breeding be honored in an exhibit devoted to the struggle for justice, alongside people like Martin Luther King, Jr.? It’s a travesty.

If the Smithsonian truly cares about justice, they’ll remove her bust, as requested in this letter.