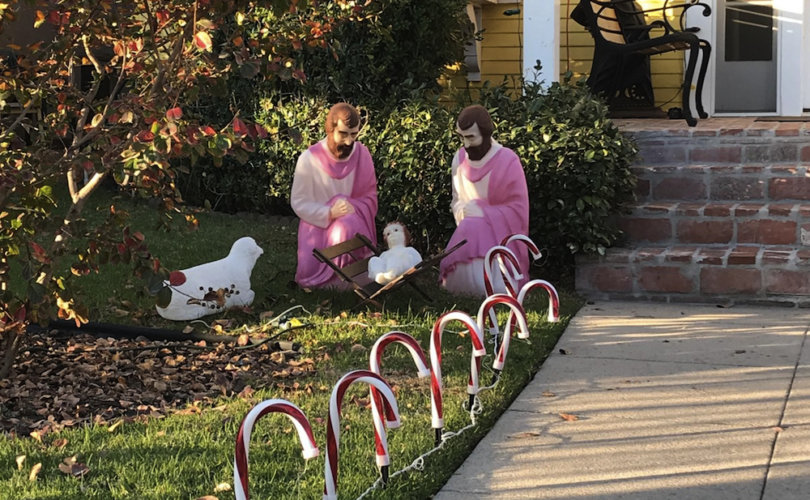 LOS ANGELES, California, November 29, 2017 (LifeSiteNews) – An LGBT activist and comedian is promoting a nativity scene with two St. Josephs and no Virgin Mary.

Some have dubbed this a “gaytivity scene.”

“Our neighbors’ two Joseph nativity is up & I’m beaming,” Cameron Esposito tweeted along with a photo of the blasphemous display.

One woman responded by tweeting a photo of her own “lesbian” nativity scene that uses two statues of Mary. The baby Jesus in that one is shown with a rainbow blanket.

Just came across this photo of a “gay nativity” scene — two Josephs dressed in pink watching over the Christ Child. How sad that someone believes it’s okay (or funny or cool) to impose their own agenda on the holy Birth of Jesus. Pray for those who did so, for their change of heart, and that Jesus will forgive this sacrilege, this attack on the Christian Faith.

“Jesus had two dads and he turned out fine!” is a common sneer Christians face when they oppose same-sex “marriage.”

The truth is, everyone actually has two dads – our biological fathers on earth and our Heavenly Father.

And, we all actually have two mothers – our biological mothers on earth and the Blessed Virgin Mary, who is our spiritual mother.

That doesn’t mean that deliberately depriving a child of his father or mother for the sake of adult desires is justified.

Every human being has a mother and a father. Each of them provides something unique to any children conceived by their union. Tragedies don’t always allow kids to be raised by both parents, but ideally they should be.

And isn’t it interesting that those who twist Christianity to promote same-sex relationships are usually the same people clamoring for the Church to get out of the public square?